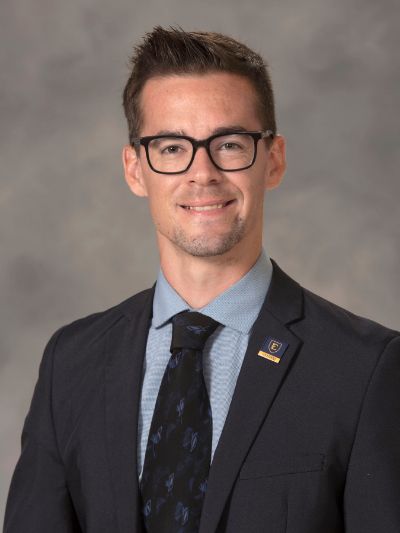 After spending two years as a Graduate Assistant while concurrently serving as a Network Media Assistant at East Tennessee State, Mike Gallagher was hired to fill the newly-created, full-time Assistant Director of Broadcasting role within the athletic department July 8, 2019. He works in many capacities for ETSU, including play-by-play voice of all ESPN broadcasts eminating from Johnson City.

In his two years as a Graduate Assistant and Network Media Assistant, Gallagher created, produced and co-hosted the only daily, athletic department-produced podcast in the country. Additionally, he ideated and led the school's push for College GameDay during the Bucs Southern Conference Championship football season in 2018.

In his two summers as a Graduate Assistant and Network Media Assistant, Gallagher also served as Director of Media Relations/Play-By-Play Voice of the Appalachian League's Elizabethton Twins, the high-rookie affiliate of the Minnesota Twins.

Gallagher came to Tennessee from Minneapolis where he hosted Gopher Sports Update - a syndicated, weekly radio program broadcast to 14 stations across Minnesota - for the better part of four years. The Minneapolis-native was also the play-by-play voice of the Minnesota Intercollegiate Athletic Conference, the only conference entirely contained within Minnesota's borders, for nearly a decade. In addition, he supplemented his coverage of the conference by hosting MIAC Weekly, a podcast featured on the conference's website of which nearly 200 episodes were produced and aired.

Gallagher holds a wide-ranging freelance portfolio with the University of Minnesota, the Big Ten Network, his alma mater Augsburg College, and various high schools. He started his media career at Bring Me The News, a Minneapolis-based news and sports aggregator, where he worked as a sports producer, at the same time interning at KFAN FM 100.3, the No. 1-rated sports radio station in the country.