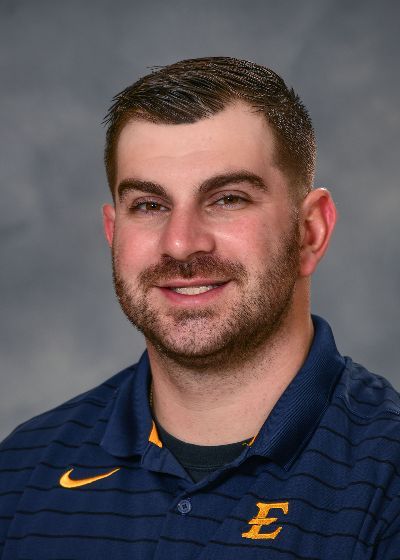 In the spring of 2022, ETSU Head Coach George Quarles announced that Adam Neugebauer would be taking over the role of Offensive Coordinator and Quarterbacks Coach at ETSU prior to the 2022 season.

Neugebauer comes to Johnson City after wrapping up his third year and second season of competition (2020 season was canceled) as offensive coordinator at Slippery Rock in 2021.

In two seasons at SRU, Neugebauer helped The Rock post a 22-4 overall record with two appearances in the NCAA Division II playoffs. The SRU offense ranked in the top 10 nationally in both seasons and averaged 491.0 total yards and 42.8 points over the 26 games Neugebauer oversaw the offense. Included in those numbers was an average of 337.0 passing yards per game and a total of 95 passing touchdowns (3.7 per game) over 26 games.

In his first season with The Rock in 2019, Neugebauer played an instrumental role in helping lead Slippery Rock to a 13-1 record that included NCAA Super Region I, Pennsylvania State Athletic Conference and PSAC Western Division championships, an appearance in the national semifinals and a ranking of sixth in the final American Football Coaches Association Division II Top 25 poll.

Under Neugebauer’s guidance Slippery Rock finished the season ranked second in the nation in first downs, third in scoring offense, fifth in passing offense, eighth in red zone offense, ninth in total offense and 19th in third down conversion percentage.

The Rock shattered numerous single-season offensive records in 2019 and finished the year with 7,024 yards of total offense and 647 points. The Rock averaged 501.7 yards of offense per game that included 329.9 passing yards and 171.9 rushing yards per game. SRU put up 46.2 points per game and scored a program record 88 touchdowns on the year.

Neugebauer designed an offense that helped quarterback Roland Rivers III become the first player in program history to win the Harlon Hill Trophy, presented to the Division II Player of the Year. Rivers III finished the 2019 season with 4,460 passing yards to go along with 52 touchdowns and just seven interceptions. He completed 66.9 percent of his passes and also rushed for 700 yards and nine touchdowns to set a Division II record for touchdowns responsible for with 61.

After the 2020 season got canceled, Slippery Rock picked up right where it left off in 2021.  The Rock won a third straight PSAC West title with Neugebauer again guiding one of the top offenses in the nation.

Slippery Rock reached the NCAA playoffs for the third straight season and finished the year with a 9-3 record after a slew of injuries to key players late in the season.

Neugebauer joined the staff at Slippery Rock after spending the previous two seasons as the quarterbacks coach at Division I Georgetown University, where he helped lead an offensive staff that saw a four-win improvement from 2017 to 2018.

While working at Georgetown, Neugebauer also had the privilege of serving as head coach for USA Football at the 2018 International Bowl, where he coached 55 of the top high school players in the country to a win over Team Nordic (Sweden, Finland, Netherlands) at AT&T Stadium, the home of the Dallas Cowboys.

Prior to joining the staff at Georgetown, Neugebauer got his coaching start at the Division II level at Tiffin University, where he spent a total of six seasons. In his final two seasons, Neugebauer worked as the Offensive Coordinator. He also worked with the quarterbacks for his final four seasons at Tiffin. In 2016, the Dragons averaged 31 points per game and 435 yards of offense under Neugebauer’s guidance. Five offensive players earned spots on the All-Great Lakes Intercollegiate Athletic Conference (GLIAC) Teams, including the first-ever offensive lineman on the second team.

Under Neugebauer’s tutelage, quarterback Antonio Pipkin graduated as Tiffin’s all-time leader in plays (2,023), passing attempts (1,514), completions (980), passing yards (10,490), total offense (13,147) and most 300-yard passing games (15). On a national level, Pipkin’s career is one of the best in NCAA Division II history, finishing 13th all-time in total offense, 27th in passing yards and 19th in total offense per game (298.79). Pipkin is only the third quarterback to ever rush for at least 2,000 yards and pass for at least 10,000 yards. He was the 2015 GLIAC Back of the Year and was a finalist for the Harlon Hill Trophy, given to the most valuable player in Division II.

Prior to embarking on a coaching career, Neugebauer was a standout quarterback at West Virginia Wesleyan College, where he broke 15 school records and never lost a home game in two years as a starter. He led Division II in five offensive categories as a senior in 2011, including passing yards (4,111), touchdowns (42), completions (353), completions per game (32) and yards per game (372). A two-year captain, Neugebauer was named the Super Region One Player of the Year and the West Virginia Intercollegiate Athletic Conference (WVIAC) Offensive Player of the Year as a senior. He was also a finalist for the Harlon Hill Trophy and earned first team All-America honors.

Neugebauer graduated with degrees in criminal law and political science from West Virginia Wesleyan in 2012. He currently resides in Johnson City with his fiancé Lindsay Littler.