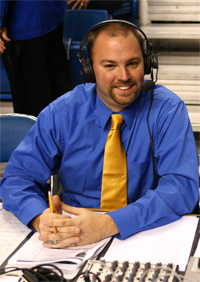 A 2000 graduate of ETSU with a degree in broadcasting, "The Voice of the Bucs" Jay Sandos spearheaded the launch of an in-house radio and television production network in 2003, Sandos became the lead broadcaster for East Tennessee State University Athletics in the fall 2002.

In its infancy, the Buccaneer Sports Network created, produced, edited and hosted two weekly television features, one a traditional coaches show featuring Buccaneer head coaches discussing the happenings within their programs, the other a magazine-style show titled Inside Buc Sports. The programs, hosted by Sandos, aired across the Tri-Cities and were also featured on Fox College Sports.

In 2006, the Buccaneer Sports Network innovated a paid streaming service to watch ETSU road games, while the Atlantic Sun, the Buccaneers conference at the time, would follow in the footsteps of those at BSN in creating ASun.TV, a similar service used for all of the league’s members. The two sides came together shortly after, having ETSU’s in-house network produce the league’s championships in 2007.

Sandos and the Buccaneer Sports Network continued to lead from the front as the years rolled on. In 2009, the group built a production trailer complete with capabilities to produce streamed games on the ESPN family of networks. Three years later, a full-time position was added to handle the growing demand for streaming content and productions brought to life on the school’s in-arena video boards. In 2015, another member was added to the BSN team as a graduate assistant position materialized, the role handling streaming broadcasts of Olympic sports in addition to radio studio production.

That same year, the Buccaneer Sports Network’s radio initiatives raised their profile, moving radio productions of football and men’s basketball games that had been broadcast with minimal bandwidth since the inception of the network to a 10,000-watt FM transmitter, expanding the reach of the second iteration of ETSU football and the powerhouse ETSU men’s basketball team tenfold.

A start-from-scratch endeavor, the Buccaneer Sports Network was at the center of a 2018 media rights deal that landed BSN’s offerings with Van Wagner Sports and Entertainment, taking a once-penniless product to financial fortitude as part of a blockbuster deal that spanned a full decade and was valued at $15 million. Sandos continues to march on as the voice of ETSU football and men’s basketball across BSN’s network of stations.

Sandos is married to Sunny Ricker Sandos and they have a daughter Jacey and twin boys Rhett and James.