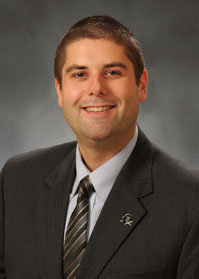 Brandon became Athletics Ticket Manager for ETSU Athletics in October of 2007. In that role, he oversees all day-to-day operations of the athletics ticket office, game day ticket sales for all varsity sports, and manages the ticket sales staff. Since arriving at ETSU, Brandon has introduced numerous new ticket sales initiatives as well as enhancements to the game day experience. Fans may also recognize Brandon's voice as the public address announcer for ETSU Men's and Women's Basketball. He was a driving force behind the creation of the school's "Wear. Live. Think. Dream. BLUE" campaign, and was a member of the grant writing committee which brought in over $100,000 in NCAA grant funding to ETSU Athletics. During ETSU Baseball's final four seasons at Cardinal Park, it was Hudson who filled the role of event manager. His extensive background in graphic design has helped to transform the look of ETSU Athletics. Brandon's work can be seen in places such as billboards, season tickets, stadium signage, t-shirts, championship banners, brochures, team uniforms and gear, plus fan merchandise, LED signage, and numerous graphics here on ETSUBucs.com.

Brandon has over 20 years of combined experience in athletics administration at the high school, collegiate, and professional levels. Prior to arriving at ETSU, Brandon served as the Director of Operations for the Tennessee Ice Vols hockey program for nine seasons. During his tenure, Tennessee enjoyed unprecedented growth and success -- accumulating a 108-54-9 record, with four national tournament appearances, five conference championships, and two national top-ten finishes. In his final full season with UT, the program set a new standard of excellence with a 26-5-1 record and a #1 seed at the ACHA National Tournament. Among the players recruited by Hudson were 13 All-Conference selections, two Regional Players of the Year, one All-America selection, and 15 Academic All-Americans. He served as interim head coach of the Ice Vols for one season, compiling a 12-7-2 record behind the bench; and was a catalyst toward the creation of the South Eastern Collegiate Hockey Conference. In 2016, he was selected for induction in the Tennessee Ice Hockey Hall of Fame.

Hudson also spent four years with the University of Tennessee Athletics Department, working with both the development and marketing offices. While at UT, Brandon assisted in the allocation and distribution of season tickets and parking permits for football and basketball. He also assisted in the operation of the VASF Collegiate Club student organization. On game days, Brandon helped to coordinate the game day atmosphere for Tennessee Basketball and Baseball. In addition, he assisted with the early stages of Tennessee's athletic facilities capital campaign and performed some of the preliminary research on facility upgrades to both Neyland Stadium and Thompson-Boling Arena.

His other stops include stints in high school athletics, arena football, minor league hockey, and one year in minor league baseball with the Johnson City Cardinals.

While in college, Brandon was a student manager with Tennessee Basketball under Coach Jerry Green. He holds a Level 1 coaching certification with USA Hockey; membership in the National Association of Sports Public Address Announcers (NASPA) and the National Association of Athletic Ticket Sales and Operations (NAATSO) and has previously been published as a guest writer with Center Ice Magazine.

A native of Red Boiling Springs, TN; Hudson holds a Bachelor's degree in Sport Management from the University of Tennessee ('03) and a Master's in Athletics Administration from ETSU ('05). He completed his doctorate in 2019 as part of ETSU's Global Sport Leadership program.