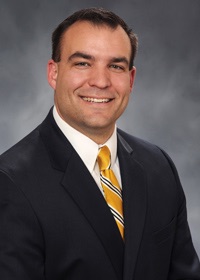 Carter replaced Dr. Richard Sander, who ended a successful four-year tenure as the program’s director of intercollegiate athletics, but will remain at the university as executive director of the Global Sport Leadership doctoral program within the School of Graduate Studies.

“During his time at ETSU, Scott Carter has provided critical leadership in guiding the return of football to campus as well as sustaining and building our other athletics programs,” Noland said. “I have no doubt he will continue to raise the bar for ETSU athletics as he assumes this new role.”

Carter, who played fullback and was a team captain for the ETSU football team from 1998 to 2002, earned both his bachelor’s and master’s degrees from ETSU. He went on to spend 10 years working in the athletic development offices at the University of Tennessee before returning to the Bucs’ program in the winter of 2014. Since that time, Carter has had responsibilities for the operation of the athletic department while also helping lead many critically important initiatives such as the rebirth of the football program in 2015, the construction of the new on-campus football stadium in 2017, and directing multiple corporate and philanthropic fundraising efforts for the overall athletic department.

Carter, whose wife Kristen was also student-athlete and graduated from ETSU, said the opportunity to lead the Bucs’ athletic program is a dream come true for his entire family, which includes daughters Kate (10) and Mia (9).

“I’m blessed to work with leaders like Dr. Noland and Dr. Sander, and it’s an honor to have this opportunity to lead the athletic department at my alma mater,” said Carter, who is a summa cum laude graduate of ETSU. “It is humbling to go to work every day to improve the lives of our student-athletes. Championship-level success both academically and athletically will continue to be our focus each day. This athletic program belongs to the students, alumni and people of this region. The Bucs are your team and it is a privilege to have the opportunity to make you proud.”