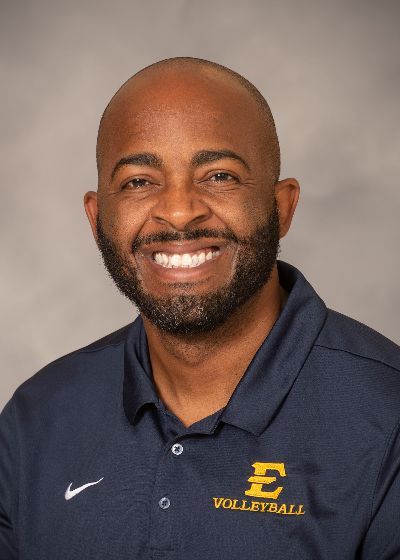 Marquis Clark rejoined the ETSU volleyball coaching staff in 2021 after a brief stint down in Florida coaching collegiate and club volleyball. He is in his second stint with the Bucs after spending the 2014-15 season with the program.

Clark has been all around the coaching scene, from coaching club and high school to multiple DI volleyball programs, helping coaching staff’s by using the popular volleyball data program Data Volley.

Clark got his first stint as a head coach at Cloud County Community College from 2010-12. The following season, he landed a spot on the Wichita State volleyball staff working as a volunteer assistant. That 2013 Wichita State team went 28-7, their 11th straight 20-win season, and swept the Missouri Valley Confer- ence Tournament, but would eventually lose in the first round of the NCAA Tournament to #23 Kansas.

In 2014, Clark made his way to Johnson City under ETSU legend Lindsey Devine as an assistant coach and recruiting coordinator. That year was ETSU’s first volleyball season as part of the Southern Conference, after nine years of affiliation to the Atlantic-Sun Conference. He then made his way down to the Sunshine State at DII Brevard College in a similar role for the next two seasons before returning to Johnson City. The Kansas native has made an impact off the hardwood, coaching at numerous clubs across the country, and most recently with the Tri-Cities Extreme Volleyball Club.

Clark is a native of Dodge City, Kansas and obtained both his Bachelor’s and Master’s degrees from Kansas State University (2004, 2008). Clark also spends time as an adjunct professor at East Tennessee State teaching Women, Gender, and Sexuality Studies. Clark has two daughters, ages 3 and 10.