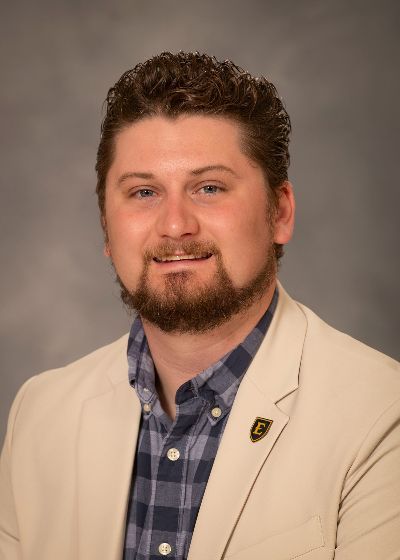 Mike Ezekiel rejoined the ETSU athletics communication staff on August 29, 2022 as the Associate Director of Communications. He is primarily responsible for the publicity efforts of the football, volleyball, women's basketball, baseball and women's tennis programs while assisting with others.

Previously, Ezekiel spent two seasons as a graduate assistant with the Bucs from 2017-2019. He handled day-to-day duties for baseball, men's soccer, women's soccer and track & field while working gamedays for various sports.

Ezekiel returns to Johnson City after three successful years as the Director of Athletics Communications and Operations at McMurry University in Abilene, Texas from 2019-2022. In that role, Ezekiel was responsible for the publicity efforts and operations of all 21 intercollegiate programs.

While at McMurry, Ezekiel and his staff won American Southwest Conference Sports Information Department of the Year award in 2021 and 2022. Ezekiel was the first SID to win the award in back-to-back seasons. Only three schools have won the award more than once since its inception in 2009.

During his first stint at ETSU, Ezekiel spent two summers as the public address announcer, graphic designer and media relations assistant for the Kingsport Mets, an Appalachian League member and the Rookie affiliate of the New York Mets organization.

Prior to his first stint at ETSU, Ezekiel spent five years with the University of North Alabama Department of Athletics, with two of those as an intern with the broadcast team and sports communication office. The Florence, Alabama native also worked as Managing Editor for The Flor-Ala newspaper, as a string writer for the Times Daily and as a reporter and talent for Big River Broadcasting with Fox Sports Shoals. He also managed and produced weekly podcasts while in college.

Ezekiel graduated from the University of North Alabama with a B.S. in Journalism Multimedia in the spring of 2017. He was named the UNA Department of Communication's Most Outstanding Senior for 2017. He completed his master's degree at East Tennessee State University in 2019, majoring in sports management.

Ezekiel and his wife, Baily, married on July 16, 2022 in Abilene, Texas. The couple now resides in Gray, Tenn.