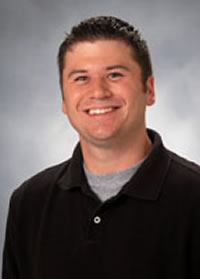 Longtime ETSU staff member Kevin Brown was promoted to Assistant AD for Communications in October of 2018. Currently, he is the primary contact for football, men's basketball, men's golf, cross country and track & field.

After his first year as a Media Relations Coordinator, Kevin Brown was promoted to the Assistant Director for the ETSU Athletic Media Relations Office in September 2007. Brown has acted as the primary contact for women’s basketball, softball, cross country, track and field, volleyball, baseball and men's golf. In addition, he assists with game-day operations for all of ETSU’s athletic programs.

Brown, a native from Arlington Heights, Ill., came to Johnson City after working as a media relations intern for the 2005 World Series Champion Chicago White Sox. While with the Sox, Brown assisted with creation of the 2005 postseason media guide and worked with the media relations staff throughout the entire playoffs. During the regular season, he helped create pre/post game notes, minor league reports and assisted with game-day operations for all home games.

Brown is a 2004 graduate of DePaul University, where he earned a B.S. in Finance. While attending classes in Chicago, he was a student intern in the Sports Information department for the Blue Demons. Brown also assisted with the 2005 NCAA Men’s Basketball Chicago Regional/Regional Final and the 2006 NCAA Women’s Basketball First and Second Round, both hosted by DePaul.

Brown is married to former ETSU women's soccer standout Hannah Johnson and they reside in Jonesborough, Tenn. They have two children: Eliza and Augie.