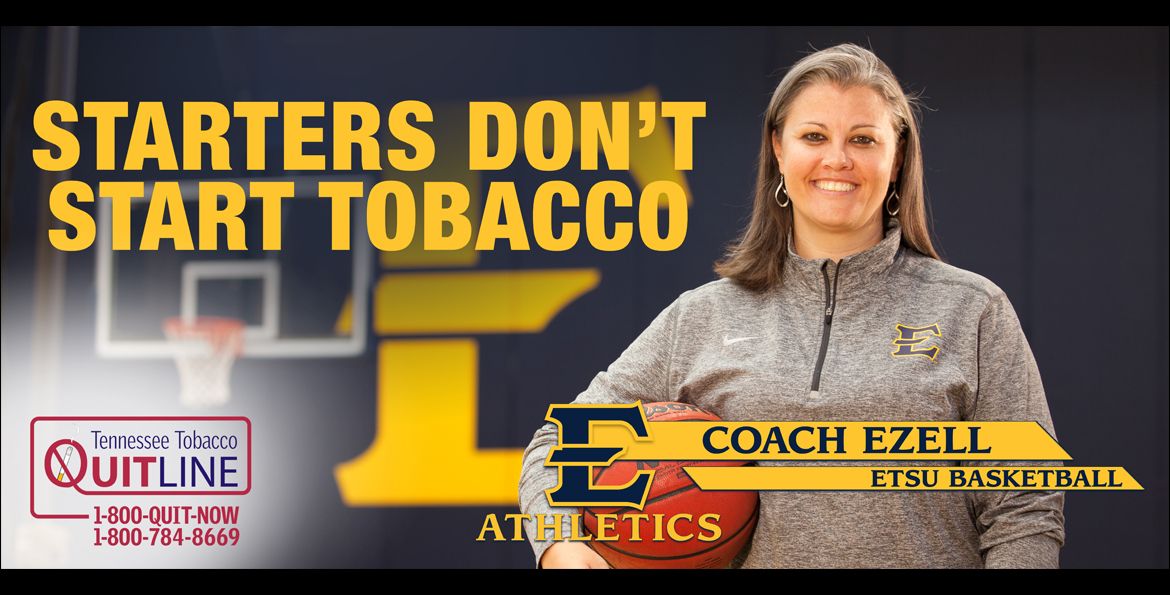 The following press release was distributed Friday by the Tennessee Department of Health and outlines ETSU's cooperation with the new "Don't Start" campaign aimed at encouraging children to strive for a healthy lifestyle.

Johnson City, Tenn. (Oct. 16, 2015) – Dr. John Dreyzehner, Commissioner of the Tennessee Department of Health, and Dr. Wilsie Bishop, Vice President for Health Affairs and Chief Operating Officer for East Tennessee State University, joined Rebekah English, Regional Director of the Northeast Regional Health Office, and Gary Mayes, Regional Director of Sullivan County Regional Health Department, to kick off a three-part part media- and community-outreach campaign to combat tobacco use in the region. The first part will operate under the slogan “Don’t Start,” and the campaign will encourage children to strive for a healthy lifestyle through physical activity and sports instead of trying tobacco. It will encourage school campuses, local parks, and other local organizations to ban tobacco use.

Focusing on the Tri-Cities region, the Don’t Start campaign is a partnership between the Tennessee Department of Health and East Tennessee State University Athletics Department and funded by the Tobacco Settlement Funding, a statewide Department of Health movement using prevention and cessation and the power of the media to solve our state’s greatest health problems due to tobacco use. The settlement funding has three primary focuses: preventing children from starting to use tobacco, decreasing the number of women who smoke while pregnant, and preventing secondhand smoke exposure among young children. This media campaign will be broken into three parts with efforts toward childhood prevention being first, to be followed in the spring with media efforts that address pregnant smokers and secondhand smoke exposure.

The Don’t Start campaign will include messages on television, radio, and billboards that warn children and parents about the risks of tobacco use and encourage them to excel physically instead. At the launch event, Ms. English unveiled the videos that delivered those ideas powerfully by coaches and athletes from East Tennessee State University. County education and cessation programs will reinforce the Don’t Start concept through various distribution channels. Communities and school systems will be asked to enforce or adopt tobacco-free policies that ban tobacco use in public places.

Nearly a third of Northeast Tennessee’s population uses tobacco. Because 9 out of 10 cigarette smokers first tried smoking by age 18, preventing tobacco use among youth is critical to ending the tobacco epidemic in the United States. Prevention strategies that help adolescents stay tobacco-free must be given high priority. It is well known that people who do not smoke in their childhood or adolescence are unlikely to begin at all.

A second priority is smoking during pregnancy. Not only does smoking reduce a woman's chances of getting pregnant, but women who smoke have a higher risk of never becoming pregnant. There is consistent evidence that mothers who smoke are more likely to deliver their babies early. Preterm delivery is a leading cause of death, disability, and disease among newborns. One in every five babies born to mothers who smoke during pregnancy are born too small or too early, are not as healthy, and are about three times as likely to die from SIDS (crib death).

The third priority concentrates on our state’s most vulnerable citizens: infants and toddlers. Secondhand smoke is not risk-free, and environmental tobacco smoke is linked to an estimated 2.5 million deaths from health problems caused by exposure to secondhand smoke. Studies show that older children whose parents smoke get sick more often, including asthma and ear infections. Their lungs grow less than children who do not breathe secondhand smoke, and they get more bronchitis and pneumonia. Wheezing and coughing are more common, and secondhand smoke can trigger an asthma attack in a child, putting the child’s life in danger.

“I couldn’t be more pleased that ETSU has partnered with the Department of Health to create this outreach effort, particularly because it targets our youth,” Dr. Wilsie Bishop said. “Every day here on the campus of ETSU, faculty members within our Academic Health Sciences Center are studying the effects of tobacco use and exposure on children. The results of such research prove beyond doubt that we must focus more effort on prevention. This campaign does just that.”

“Growing up in North Carolina, the tobacco capital of the United States, I saw the effect of what cigarette smoking can do to friends and family members,” Coach Torbush said. “The only way to effectively not smoke is to never start! Once you are addicted, it becomes a habit that is nearly impossible to break and most of these bad habits start at a very young age. Don’t start!”

“One of the most important healthy lifestyle choices a person can make is to NOT use tobacco products,” said TDH Commissioner John Dreyzehner, MD, MPH, FACOEM. “We are pleased to work with our friends and colleagues at ETSU to inform more young people about the many negative effects of tobacco and how it can rob them of their money, health and happiness. We are optimistic the planned messaging will impact both young people who have not yet used tobacco and older Tennesseans who would like to end their tobacco and nicotine addictions.”

“We want to empower kids by educating them on the dangers of tobacco use and encourage healthy choices through effective programs, community projects, health systems, educators, and others,” said Rebekah English. “We are excited to reinforce and expand that message to the public with a mass media campaign.”

“Sullivan County Regional Health Department and the Northeast Tennessee Region are both negatively affected by the burden of tobacco use in our area,” Gary Mayes said. “We are enthusiastic about collaboration on this tobacco control campaign.”

The Don’t Start campaign was launched at East Tennessee State University in Johnson City, Tennessee.   The key audience for the campaign is children 9 – 18, because almost every smoker starts during the teenage years. By the time they realize what cigarettes are doing to their bodies, they’re hooked. Adults and parents will also be reached by the messages. The effectiveness of the campaign will be evaluated with surveys of adults in the region.

For more information on how to quit, call 1-800-QUITNOW or contact your local health department.