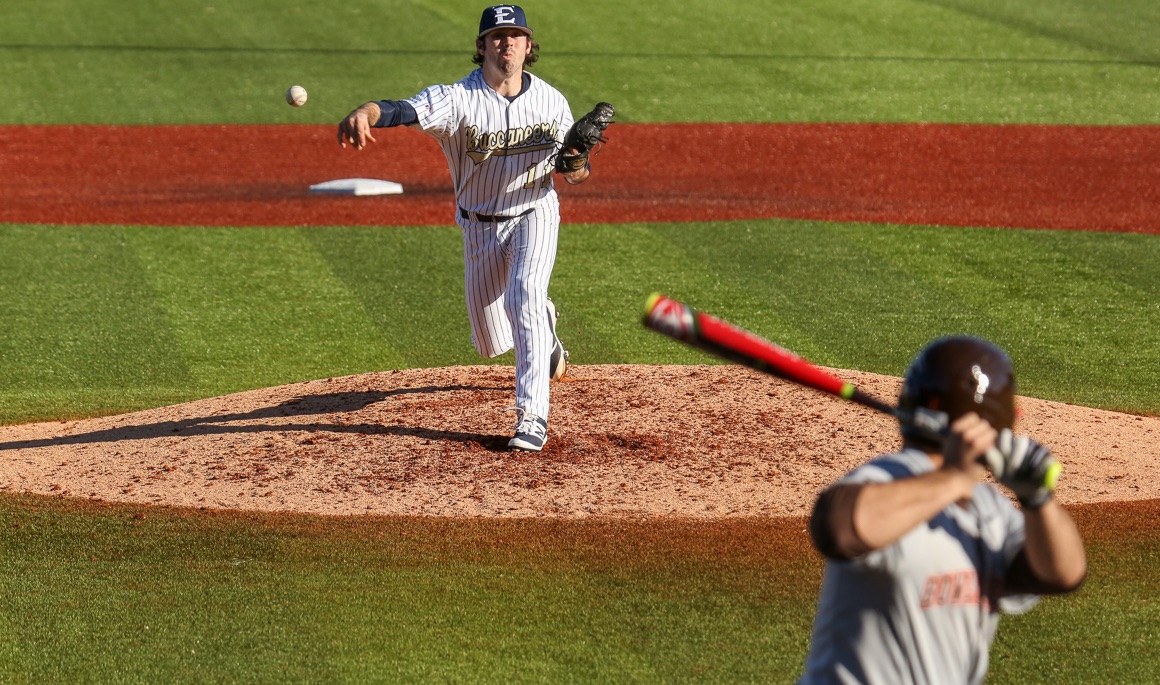 JOHNSON CITY, Tenn. (Feb. 19, 2016) – The ETSU baseball team faltered in its 2016 season opener as Bowling Green rallied past the Buccaneers, 7-1, on Friday afternoon at Thomas Stadium.

Despite taking a 1-0 lead on an RBI single from Kevin Phillips (St. Louis, Mo.) in the bottom of the fourth, the Buccaneer offense was held in check as C.J. Schildt and Devin Daugherty kept the Blue and Gold scoreless in the final five innings, which led to the Falcon rally.

After holding BGSU scoreless for the first four innings in his ETSU debut, junior right-hander Blake Smith (Ninety Six, S.C.) surrendered a pair of fifth-inning runs, while the Falcons added extra insurance runs with four in the eighth and one more in the ninth to cap off the six-run victory. Smith (0-1) was dealt the loss after allowing the two runs on four hits, while striking out three and walking two in 4.1 innings. Schildt (1-0), a fellow junior college transfer, earned his first win in a Bowling Green uniform as he allowed the lone run on five hits in five innings and Daugherty registered four innings of two-hit ball en route to earning the save.

Seniors Jeremy Taylor (Fayetteville, Ga.), Trey York (Knoxville, Tenn.) and Kevin Phillips (St. Louis, Mo.) accounted for five of ETSU’s seven hits, while Taylor – who entered the season with a streak of reaching base safely in 31 straight games – kept it alive after beating out a bunt single in the fifth inning. York and Phillips recorded multi-hit games. The duo made up the scoring play as York led off the fourth inning with a double and sprinted home on Phillips’ RBI single to left. Junior Blake Rowlett (Clarksville, Tenn.) picked up his first hit of his Buccaneer career and ETSU’s first hit of the season after ripping a deep double to right-center in the third inning.

Smith surrendered the lead in the top of the fifth as Justin Mott knocked in two runs off his single to centerfield. ETSU red-shirt junior right-hander Peyton Taylor (Kingsport, Tenn.) came in from the bullpen and stopped the bleeding for ETSU. Taylor finished the sixth inning without allowing a hit. He finished the night with 1.2 innings of work with one hit and one strikeout.

Jeremy Taylor tried to get a one-out rally started in the bottom of the fifth when he beat out his bunt down the third base line. Taylor advanced to third following a wild pitch and by a passed ball, but the rally eventually ended as York struck out swinging.

Senior right-hander Griffin Krieg (Nashville, Tenn.) answered the call in the seventh inning as sat down the first three batters in order; however things unraveled for the Nashville native an inning later. Bowling Green’s bats caught fire as they rallied for four runs on four hits.

Nick Glanzman extended the lead to two with his one out RBI single. After surrendering a walk to load the bases, Cam Daugherty came in to pinch hit and connected on a full count to clear the bases with a 3 RBI double.

The Bucs tried to rally back in the bottom half of the eighth, but York was called out at third trying to put runners on first and third.

Bowling Green added insurance in the ninth with a RBI single by Greg Basalyga.

Three Falcons finished with two hits each, while Daugherty and Mott combined to drive in five of BGSU’s seven runs.

The two teams will meet again Saturday at 2 p.m. at Thomas Stadium. Victor Gonzalez (Mount Pleasant, S.C.) is set to start for ETSU and Zac Carey for the Falcons.