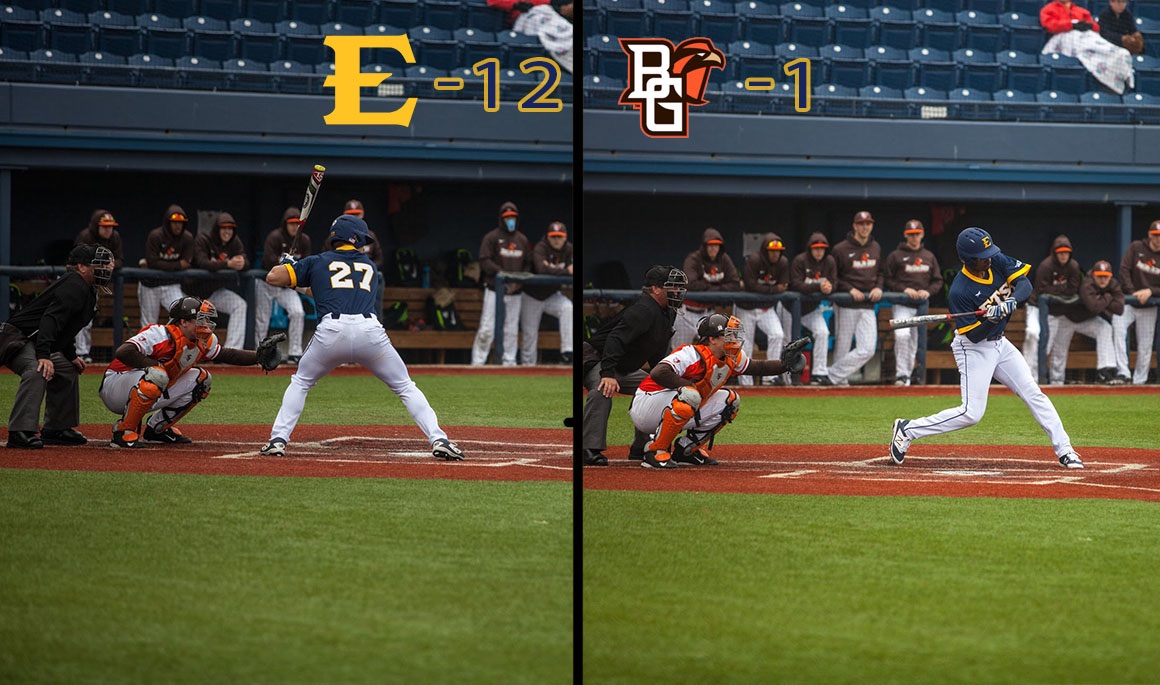 There were eight different batters that connected with a hit for the Bucs. Three individuals had a three-hit game, and two with a two hit-game. Kevin Phillips (St. Louis, Mo.) led the surge with the first ETSU home run of the year that hit off the scoreboard in left field. Phillips finished the day 3-for-5 with 4 RBIs and three runs scored.

Trey York (Knoxville, Tenn.) and Hagen Owenby (Knoxville, Tenn.) were the other two Bucs to have three hit afternoons. Owenby connected with three singles, while York smacked his second double of the season along with a pair of singles. Jeremy Taylor (Fayetteville, Ga.) extended his on-base streak (33) in the first inning with a leadoff single to left field. Aaron Maher (Brentwood, Tenn.) joined in with a pair of hits including a two-run homer to right center field. Maher finished the game with three RBIs, a run scored, and a walk.

"We played with a chip on our shoulder today. There was a lot of emotions yesterday, but I think it was a lot stronger today," said Maher. "We didn't give up from the result yesterday. We need to treat every aspect like it's 0-0 and that's what we did today."

Gonzalez started in his first game for the Blue and Gold and went six strong innings. In two of his first three frames, he set the Falcon batters down in order. He finished the game with three hits allowed and three strikeouts. Haeberle came out of the bullpen for two innings and shut down the Falcons. He struck out five of the six batters faced.

"It felt good to be out there. My fastball was good because I was able to locate it, but it was great to be out there especially when you get a big lead like today," said Gonzalez. "This offense was great, but you always have to go out on the mound and battle against every hitter. It is easy to be complacent in those situations."

The Bucs opened the scoring in the third inning with a Taylor bunt base hit. York moved Taylor to second on an infield single, and Phillips blasted a three-run home run to give the Bucs a 3-0 lead. The lead was extended in the bottom of the fourth as ETSU tallied six runs. Maher crushed a two-run homer to right center. The offense rallied with four consecutive hits by Chris Cook (Kingsport, Tenn.), York, Phillips, and Owenby to give the Buccaneers a 9-0 lead.

The East Tennessee State University offense added a run in the fifth, sixth and eighth innings to make the lead 12-0. Blake Rowlett (Clarksville, Tenn.) cracked a RBI double in the eighth that hit off the top of the centerfield wall. Rowlett has back-to-back games with doubles.

Gonzalez earned the first win for the 2016 season for the Bucs (1-1), while Zac Carey was pinned with the first Bowling Green (1-1) loss.

ETSU will hold the series finale at Thomas Stadium on February 21 for a 1:05 p.m. start against BGSU. Ryan Simpler (Lewes, Del.) is slated to start for ETSU, and Bowling Green will counter with Andrew Lacinak, who finished the 2015 season with a 3-6 record and a 5.40 ERA.