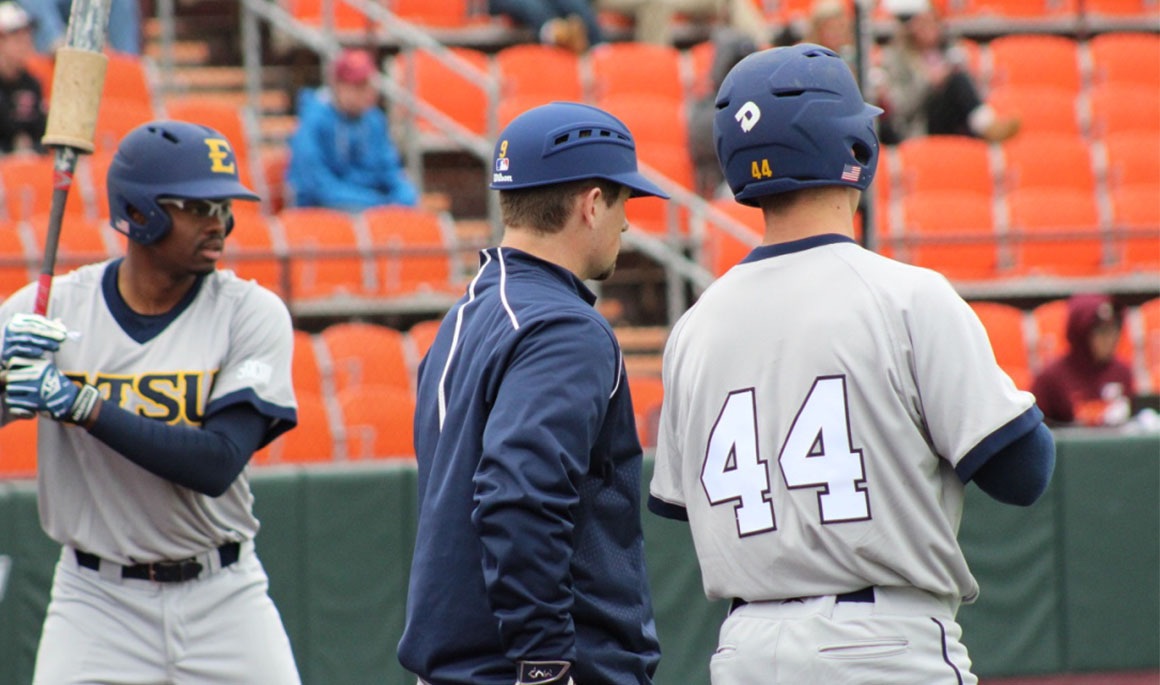 Blacksburg, Va. (Feb. 23, 2016) – The Bucs committed five errors while only tacking on four hits in the 11-0 loss to Virginia Tech in Blacksburg, Va. on Tuesday afternoon.

Highlights of the Night: The Bucs pitching staff struck out ten Hokies, which was a season high for the Blue and Gold. Jeremy Taylor (Fayetteville, Ga.) extended his on-base streak to 34 games with a hit in the third inning.

Statistical Highlights: Four different players had a hit in today’s game against the Hokies. Hagen Owenby (Knoxville, Tenn.) broke up the no-hitter for VT in the fourth inning off an infield single to short. Trey York (Knoxville, Tenn.), Kevin Phillips (St. Louis, Mo.), and Blake Rowlett (Clarksville, Tenn.), and Taylor each picked up a single in the game. Virginia Tech went 7-8 to leadoff the inning as the Bucs went just 1-9. VT had five doubles while hitting 9-23 with runners in scoring position. ETSU only struck out four times in the game as compared to the Hokies’ ten strikeouts. Every Buccaneer pitcher had at least one strikeout. Russell Koesters (Kingsport, Tenn.) led the team with three strikeouts in 1.1 innings of work. Dillon Cate (Sevierville, Tenn.) made his first appearance of the season in the second inning and went two innings with two hits allowed, no runs and two strikeouts.

Virginia Tech started the game with a runner on after a throwing error by the Bucs. The Hokie eventually moved to third after a balk and scored on the next at-bat on a sacrifice fly.

The game was blown wide open in the bottom of the second as VT accounted for five runs on five hits. The Hokies started the inning with three straight hits, and they were able to keep the bases loaded for two straight batters. Grant Maiorana moved the game to 5-0 with his two RBI single to left field.

ETSU had one inning in which they faced three batters and got out of the inning smoothly. Cate pitched the bottom of the third and surrendered one hit while striking out one.

The bottom of the fourth offered a chance for the Hokies to advance their lead after getting back-to-back hits to lead off the inning. Jamin McCann (Kingsport, Tenn.) came in and struck out the first batter he faced and forced a double play to end the inning.

Virginia Tech added at least one run in the next three innings. Logan Gentry (Kingsport, Tenn.) started the eighth for the Bucs and ended that streak by striking out one while a pop out and a groundout.

The Buccaneers fall to 1-2 on the season while VT goes 2-2 on the year. Andrew McDonald picked up his first win on the season for VT, while Ryan Simpler (Lewes, Del.) was pinned with the loss.

The Blue and Gold return home for their next eight games. The first series of the eight game stretch will start on Feb. 26-28 against Northern Kentucky University at Thomas Stadium. The first game will start at 3 p.m. at Thomas Stadium on Friday. The Bucs will then clash with UNC-Asheville on March 1 before the Boilermakers of Purdue come to Johnson City, Tenn. for a four game set.