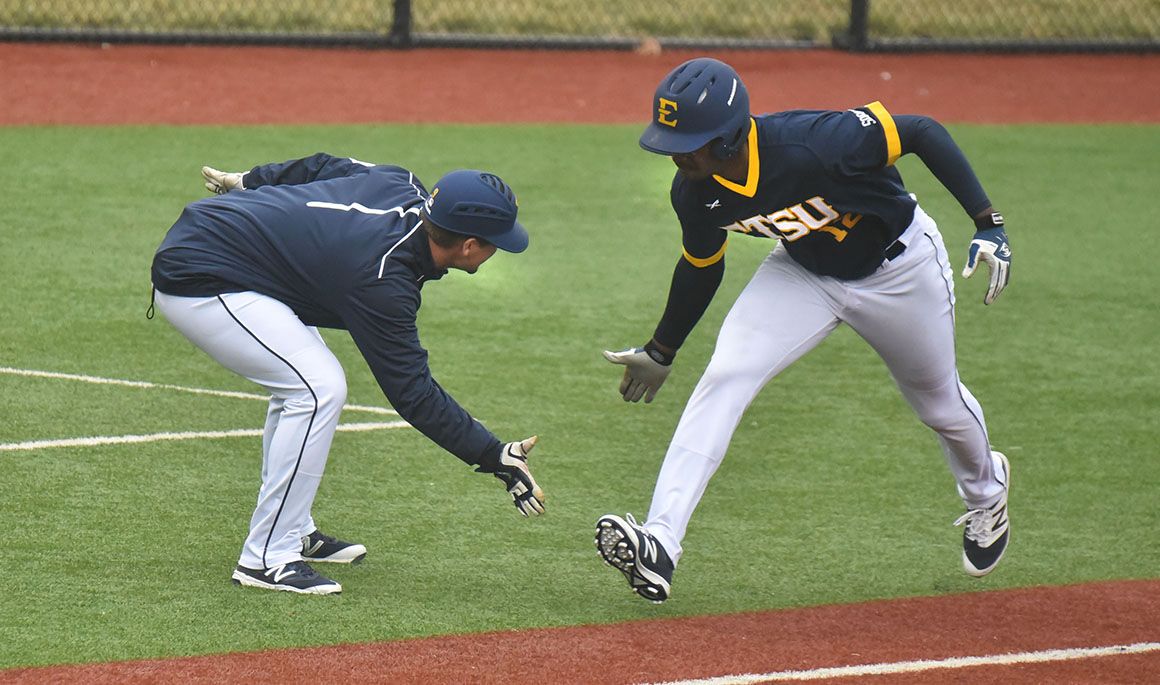 Kevin Phillips had a solo home run and the walk off hit in the 7-6 victory for the Bucs in extra innings.
Phillips hits walk off in 7-6 victory
NKU at ETSU | February 27, 2016
Related Links

JOHNSON CITY, Tenn. (Feb. 27, 2016) – Kevin Phillips (St. Louis, Mo.) cracked the walk-off, game-winning single in the bottom of the tenth inning to give ETSU the 7-6 victory on Saturday afternoon at Thomas Stadium.

Phillips had two hits with two RBIs, but none more important in the bottom of the tenth with his walk-off RBI single through the left side. His first hit of the game came in the bottom of the ninth when he hit a towering home run that went over the foul pole for his second homer of the season.

Blake Rowlett (Clarksville, Tenn.) tied the game for the Bucs in the bottom of the ninth with a RBI hit up the middle. Rowlett had a two RBI single in the second that gave ETSU the 2-1 lead.

Hagen Owenby (Knoxville, Tenn.) had a big day at the plate as he tallied three hits with a solo shot to left center field for his first homer of the season. Trey York (Knoxville, Tenn.) and Aaron Maher (Brentwood, Tenn.) had two of the four ETSU extra base hits: York hit a double and Maher hustled out a triple down the left field line.

ETSU had 17 total hits in game two with the Norse with nine of those coming in the last three innings. Seven Buccaneers had multi-hit games including Jammer Strickland (Kingston, Tenn.) and Chris Cook (Kingsport, Tenn.).

Between five relief pitchers, four of Buccaneers surrendered just one run in the six innings of work out of the bullpen. Jamin McCann (Kingsport, Tenn.), Dillon Cate (Sevierville, Tenn.), and Peyton Taylor (Kingsport, Tenn.) each had a strikeout without giving up a hit or run. Lee Haeberle (Hendersonville, Tenn.) went 1.1 innings with two hits and no runs to score.

NKU got on the board early in the first inning as they had a sacrifice fly. However, Rowlett gave the
Bucs their first lead of the afternoon on a two RBI single in the second inning.

The Norse tied the game back up in the third at two a piece after a fielding error. The Bucs threatened in the bottom of the frame as they had three runners on but left them stranded.

Logan Spurlin again gave the Norse a narrow lead in the fourth as he hit a towering home run to left field that eventually landed in the parking lot. NKU added a pair of insurance runs in the fifth with a RBI double by Will Haueter and a ground out to score Hauter from third.

Owenby hit his first home run of the year to left center on a 2-2 count to cut into the NKU lead to lead off the bottom of the fifth.

With two runners on in the sixth, Haeberle came out of the bullpen to relieve McCann. Haeberle had back-to-back groundouts to end the NKU threat.

The Bucs tallied a run in the sixth to cut the lead in half, but the Norse extended the lead again to two with a sacrifice fly.

To lead off the bottom of the ninth, Phillips turned on the first pitch he saw and smacked it over the left field foul pole. Maher followed with a triple after the left fielder for NKU lost the ball in the sun. Two batters later, Rowlett connected with a single up the middle to tie the game.

Heading into the tenth inning, Peyton Taylor came in to pitch and set down the Norse lineup in order.

Jeremy Taylor led off the bottom of the tenth for the Bucs with a single that fell in front of the center fielder. Cook attempted a sacrifice bunt, but with good hustle made it an infield hit. Owenby connected with a ball that went through the left side to load the bases for the Bucs with no outs. Phillips came up to the plate and hit the ball hard through the Norse infield to give ETSU the 7-6 win.

“The goal was to get a good pitch to hit. It was a win-win for us. The infield and outfield was in. I just wanted to get a run across the board,” said Phillips. “We focused a lot harder today. We didn’t want to come out with empty at-bats, and we did well today.”

“I was interested to see how the guys were going to respond today because yesterday’s game was a difficult loss. I am proud of the guys by not giving up and finding a way to scratch and claw back in the ninth,” said head coach Tony Skole. “Kevin Phillips had a big swing in the ninth to get us going in the ninth and tenth. He is a big senior leader for this team.”

The Bucs continue the three-game series with NKU February 28 at Thomas Stadium. First pitch for the rubber match is set for 1 p.m. Ryan Simpler (Lewes, Del.) is set to take the ball for the Bucs and looks to rebound after his first outing. The Norse will counter with freshman right-handed pitcher Jordan Menfee.