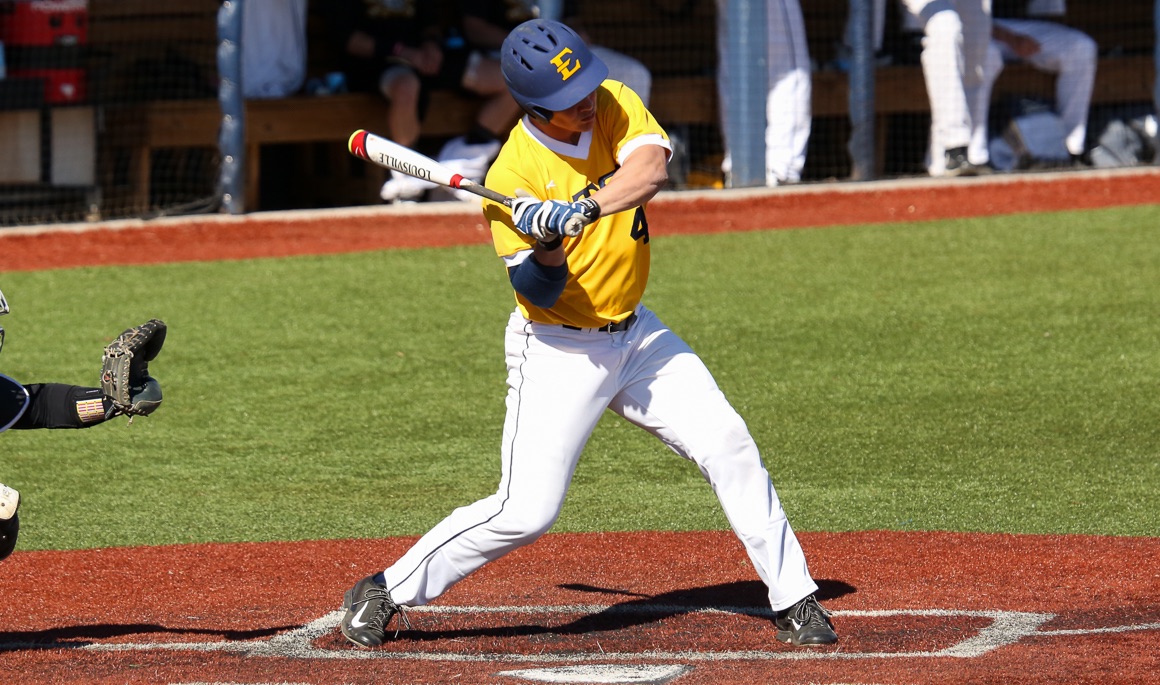 JOHNSON CITY, Tenn. (Feb. 28, 2016) – Despite getting two home runs and seven RBI by sophomore catcher Hagen Owenby (Knoxville, Tenn.), the ETSU baseball team was unable to capture the series win over Northern Kentucky as the Norse rallied past the Buccaneers, 21-12, on Sunday afternoon at Thomas Stadium.

Hagen Owenby continued his hot streak as he went 2-for-4 with two home runs and seven RBI (walked once and hit by pitch) … Owenby has homered in back-to-back games, while he recorded his first multi-homer game of his collegiate career … The Knoxville, Tenn. native’s 7-RBI performance was one shy of tying the ETSU single-game record (Mike Ellzey vs. Eastern Kentucky, April 1, 1978).

Aaron Maher (Brentwood, Tenn.) reached base four times as he went 3-for-4 with one double, one RBI and a walk, while Jeremy Taylor (Fayetteville, Ga.) and Chris Cook (Kingsport, Tenn.) also registered multi-hit games. Taylor finished with three hits, scored twice and drove in a run, and Cook went 4-for-5 with a triple and four runs scored.

Owenby extended his hit streak to six straight games and Cook has now hit safely in his last five contests.

As a team, the Blue and Gold posted double-digit hits and runs for the second time this season … Despite the 15 hits, ETSU went 2-for-15 with runners in scoring position.

With the setback, the Bucs dipped to 2-4 on the season, while NKU improved to 2-5.

The 20 hits and 21 runs by the Norse marked season highs.

The Bucs took an early 1-0 lead in the bottom of the first and led 3-1 following the first home run by Owenby in the third. However, NKU struck for six runs in the sixth – and after pulling even at seven with a four-run fourth – the Norse took the lead for good with a five-run fifth inning.

BOTTOM OF THE FIRST

The Bucs jumped out to an early 1-0 lead as Chris Cook sprinted home on a two-out wild pitch. Kevin Phillips (St. Louis, Mo.) – who capped off the ETSU rally with a walk-off single on Saturday – beat out what could’ve been an inning-ending 4-6-3 double play, which led to Cook scoring the game’s first run on Menfee’s miscue three pitches later.

Northern Kentucky pulled even with the Blue and Gold as Jake Hickey led off the inning with a double to right-center – and after advancing to third via a wild pitch – the Norse catcher scored on an RBI groundout by Dominic Mercurio.

ETSU answered the challenge in the bottom half of the frame when Hagen Owenby homered for the second straight day to put the Bucs ahead, 3-1. The All-American catcher took a 1-0 pitch over the wall in left, allowing Cook to trot home from first.

The Norse struck for six runs and chased Simpler out of the game as NKU took its first lead of the afternoon, 7-3. Simpler hit two batters, walked one, allowed a run to score on a strikeout (passed ball) and suffered the bases-clearing double to Mercurio. Unfortunately, junior right-hander Zach Thompson (Ooltewah, Tenn.) was greeted rudely as the first pitch he threw to Conor Ledger was taken to the right-center gap for an RBI double. Senior left-hander Josh Jacques ended the marathon inning by getting Trey Ganns to tap one back to the catch, leaving runners on the corners.

Owenby was back at it again as he flexed his muscles and ripped a three-run home run to left, while Aaron Maher’s two-out double to left-center plated Phillips to tie the game at seven.

The seesaw battle continued as the Norse scored five runs on five hits to regain a 12-7 lead. Quint Heady capped off the scoring plays with a three-run home run to left-center, while Hickey and Mercurio drove in runs earlier in the inning.

ETSU pulled within a pair of runs courtesy of a three-run inning as Jeremy Taylor roped an RBI single to right, while he and Dillon Clift (Soddy Daisy, Tenn.) both scored when Owenby hit a slow roller to first. With one out and the bases loaded, Owenby reached on the fielder’s choice as Ganns tried to turn the double play, but the throw went high at second allowing Taylor to also cross the plate on the play.

NKU put another dent in the scoreboard as the Norse plated five runs to extend their lead to seven, 17-10. Mike Moffatt highlighted the inning with a three-run home run to right.

Taylor recorded his third hit of the afternoon as he laced a one-out single and later scored on a sac-fly RBI from Phillips, making it a 17-11 score.

The Norse added to their lead by scratching across four more runs in the ninth, while Cook tripled and scored on Owenby’s RBI grounder in the bottom half of the inning to cap off the scoring plays.