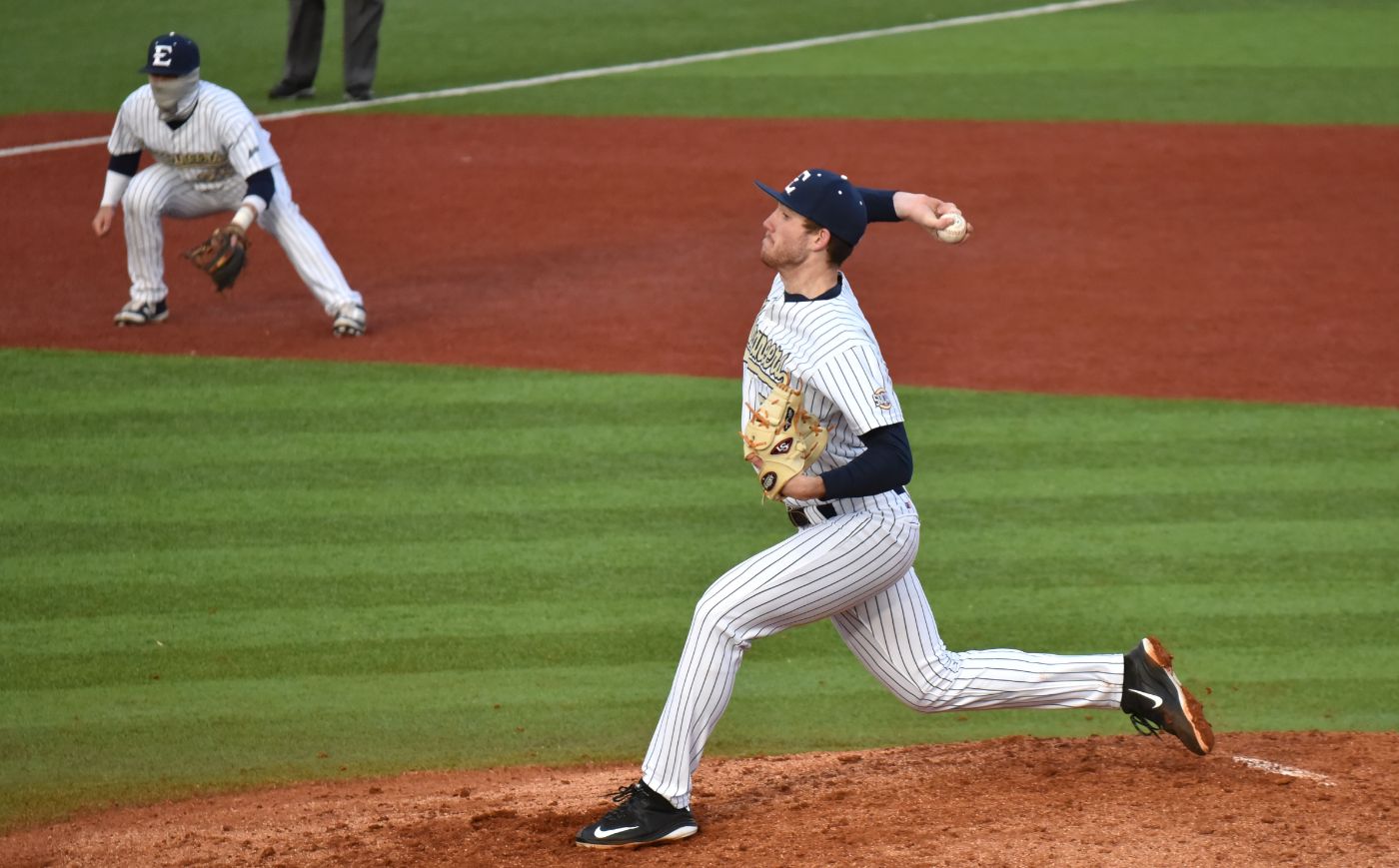 Pitching coach Chris Gordon turned to seven pitchers today for the Bucs. Lee Haeberle (Hendersonville, Tenn.) started for ETSU and went two innings without a hit or run with a pair of strikeouts. Dillon Cate (Sevierville, Tenn.) picked up the win for the team with his one inning of work in the third. From innings five to eight, the Buccaneers struck out eight batters and was led by Ryan Simpler (Lewes, Del.) who had four Bulldogs strikeout in is two innings of relief. The seven pitchers totaled 11 strikeouts, which was the most for the pitching staff in one game this season. The staff also carried a no-hitter going into the seventh inning before Kyle Carruthers doubled down the leftfield line.

The offense struck for 16 hits in the game including eight extra base hits, highlighted by three triples and two home runs. Aaron Maher (Brentwood, Tenn.) led the Bucs as he went a perfect 4-4 with a double and three singles. Hagen Owenby (Knoxville, Tenn.) and Trey York (Knoxville, Tenn.) had two hit games including a home run for each player. With a home run today, Owenby hit a home run in his third straight game, which was the first time since Clinton Freeman hit three off NKU and Tennessee in 2014. Chris Cook (Kingsport, Tenn.) went 2-5 and plated the first run of the game in the third off a RBI double. Caleb Longley (Cleveland, Tenn.) and Seth Cunningham (Bristol, Va.) each came off the bench and had triples in tonight’s game.

ETSU got on the board first in the third inning off a RBI double by Cook to leftfield.

The Bucs added a three spot in the next inning. Kevin Phillips (St. Louis, Mo.) led off the frame with a single and was followed by a Maher’ single to right field. On a full count, York cranked his first homer of the year and opened the lead to 4-0.

Owenby smacked his fourth homer of the year in the fifth inning. It was a solo home run that hit off the top of the scoreboard in left field.

In the fifth, the Blue and Gold added three insurance runs to extend the lead 8-0. In a pinch hit appearance, Longley split the right center field gap and hustled to third for his first hit of the season while putting two more runs on the board. On the next pitch, he scored from third thanks to a wild pitch.

ETSU was able to hold the Bulldog offense for 19 outs without a hit, but the first UNCA hit came in the top of the seventh when Carruthers hit a screamer down the left field line. He was able to advance to third, but Griffin Krieg (Nasvhille, Tenn.) left him stranded with a strikeout to end the inning.

UNC Asheville put their first run of the game in the eighth inning after walking a batter and letting up two hits. Peyton Taylor (Kingsport, Tenn.) forced Joe Tietjen to flyout to left, but the first run for the Bulldogs trotted home on a sacrifice fly.

However, the run was given back when the Buccaneers plated one in the bottom of the eighth. Cunningham connected for his first triple of the season and scored Lance Mays (Ridgely, Tenn.) from second base.

When talking about what has been working for Maher he commented by saying: “I am really calming myself down before I get into the box. Taking a deep breath and tell myself I am going to see a fastball in the zone, and I am going to hit it hard. We are focusing on hitting the ball hard every single time.”

When asked about how this game helps for the Purdue and Tennessee series Maher replied: “It is huge. The pitchers were stuffing hitters today. Batters had great at bats, and that is going to be nice momentum before heading into the series.”

Simpler had a great outing, and these were his thoughts: “Really, throwing my slider hard was the key. Coach Gordon and I have been working hard on the side to make it better. Having that pitch with more intensity makes all the difference.”

When asked about the no-hitter going into the seventh, this was Simpler’s response: “I didn’t even know we had it, to be honest. The pitching staff was stuffing for that long just tells you that the staff was dominant the whole game even though we allowed one run.”

Big Ten conference Purdue University comes to Johnson City, Tenn. for the first-ever matchup between the Boilermakers and Buccaneers. The four game series will start March 4 at 6 p.m. followed by a double header on March 5 starting at 1 p.m. The final game of the series will be held on March 6 with a 1 p.m. first pitch.

ETSU will then welcome the Tennessee Volunteers to Thomas Stadium for a mid-week matchup on March 9 at 6 p.m. This will be the first of two games this season between UT and ETSU.

Tickets for both the Purdue series and the Tennessee games can be purchased here. It is encouraged to buy tickets before the day of the game.