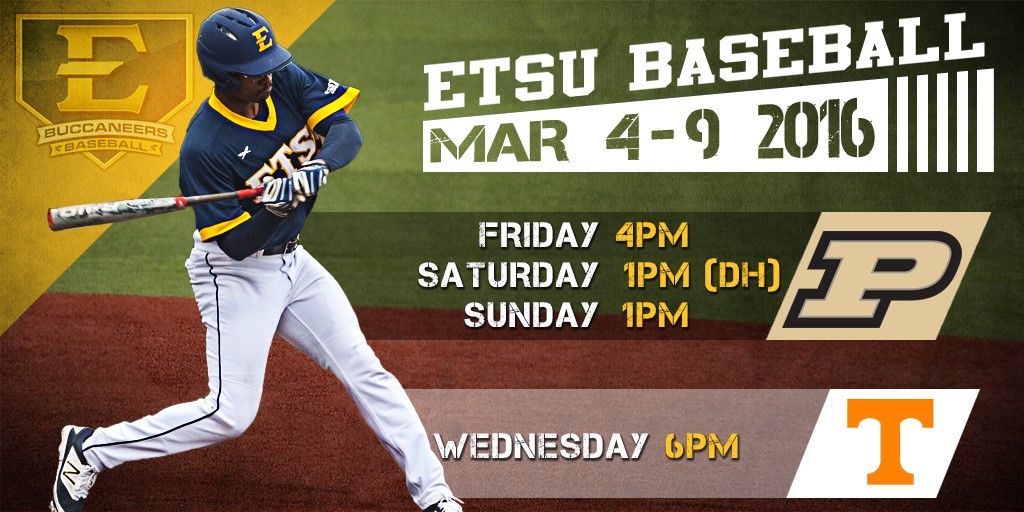 JOHNSON CITY, Tenn. (March 3, 2016) – ETSU welcomes Purdue University to town for a four game series starting March 4 at 4 p.m. and prepares for in-state rival, the University of Tennessee, to come to Johnson City on March 9 at 6 p.m.

Pitching coach Chris Gordon turned to seven pitchers Wednesday for the Bucs. Lee Haeberle (Hendersonville, Tenn.) started for ETSU and went two innings without a hit or run with a pair of strikeouts. Dillon Cate (Sevierville, Tenn.) picked up the win for the team with his one inning of work in the third. From innings five to eight, the Buccaneers struck out eight batters and was led by Ryan Simpler (Lewes, Del.) who had four Bulldogs strikeout in is two innings of relief. The seven pitchers totaled 11 strikeouts, which was the most for the pitching staff in one game this season. The staff also carried a no-hitter going into the seventh inning before Kyle Carruthers doubled down the left field line.

The offense struck for 16 hits in the game including eight extra base hits, highlighted by three triples and two home runs. Aaron Maher (Brentwood, Tenn.) led the Bucs as he went a perfect 4-4 with a double and three singles. Hagen Owenby (Knoxville, Tenn.) and Trey York (Knoxville, Tenn.) had two hit games including a home run for each player. With a home run today, Owenby hit a home run in his third straight game, which was the first time since Clinton Freeman hit three off NKU and Tennessee in 2014. Chris Cook (Kingsport, Tenn.) went 2-5 and plated the first run of the game in the third off a RBI double. Caleb Longley (Cleveland, Tenn.) and Seth Cunningham (Bristol, Va.) each came off the bench and had triples in the game.

Purdue has played a tough stretch of games to start the season including number 10 ranked California in Berkley. To start the season, the Boilermakers went to Atlanta, Ga. to take on number 21 Georgia Tech, Kennesaw State, and Georgia State. The Boilermakers took one game against the Panthers by a final score of 5-3. In two of the three games against California, Purdue was shut out, 10-0 and 4-0.

Both offense and defense has struggled for Purdue so far as their pitching staff totes a 6.24 ERA and allows an average of seven runs a game. Purdue has sent out thirteen pitchers this season with three starters. Of the three starters, Nick Dalesandro has been the best option for the team. He has started two games and allowed six runs on eight hits in 10.1 innings of work. He has only walked one batter and struck out eight.

The offense is batting .227 as a team, which is being led by Jack Picchiotti, who has started in all six games. He has eight hits to his name with a double and three RBIs. His on-base percentage is .522, so he is a valuable leadoff guy for Purdue. The Boilermakers don’t have a lot of power, but Kyle Johnson has shown some signs of power. He is batting .364 this season with three doubles and leads team with three RBIs.

Purdue is also error prone as they have ten errors in the early parts of the season. They are sporting a .955 fielding percentage.

This is the first-ever matchup between Purdue and ETSU. The Bucs have only played three Big Ten teams: Indiana, Maryland, and Penn State. The most recent matchup between the Bucs and the Big Ten was versus Penn State in 2013 to open the season. The Bucs went on to take two out three in Johnson City against the Nittany Lions.

Smith will open the series for the Bucs and looks to continue on his early season success. He currently has a 1.74 ERA in two starts on the season. He has struck out nine with just two runs to score in 10.1 innings of work. Gonzalez pitched well in his second game of his career for the Blue and Gold as he tossed six shutout frames against NKU last weekend. Simpler gained some confidence by coming out of the bullpen against UNC Asheville as he went two innings with four strikeouts and no hits or runs.

Andrews will open the series for Purdue and has been ruffed up in his first two starts of the season. He has allowed six runs on 12 hits with just four strikeouts. Gavin Downs is in a similar situation as he only has five innings to his name this season in two starts. He has allowed nine runs (seven earned) with ten hits and one strikeout.

After the four game series with Purdue, the Bucs will hit the road for a game against UNC A&T in Greensboro, N.C. on March 8. ETSU will then turn around to come home on March 9 to face off against SEC foe the Tennessee Volunteers. First pitch for the Tennessee game is set for 6 p.m. at Thomas Stadium.