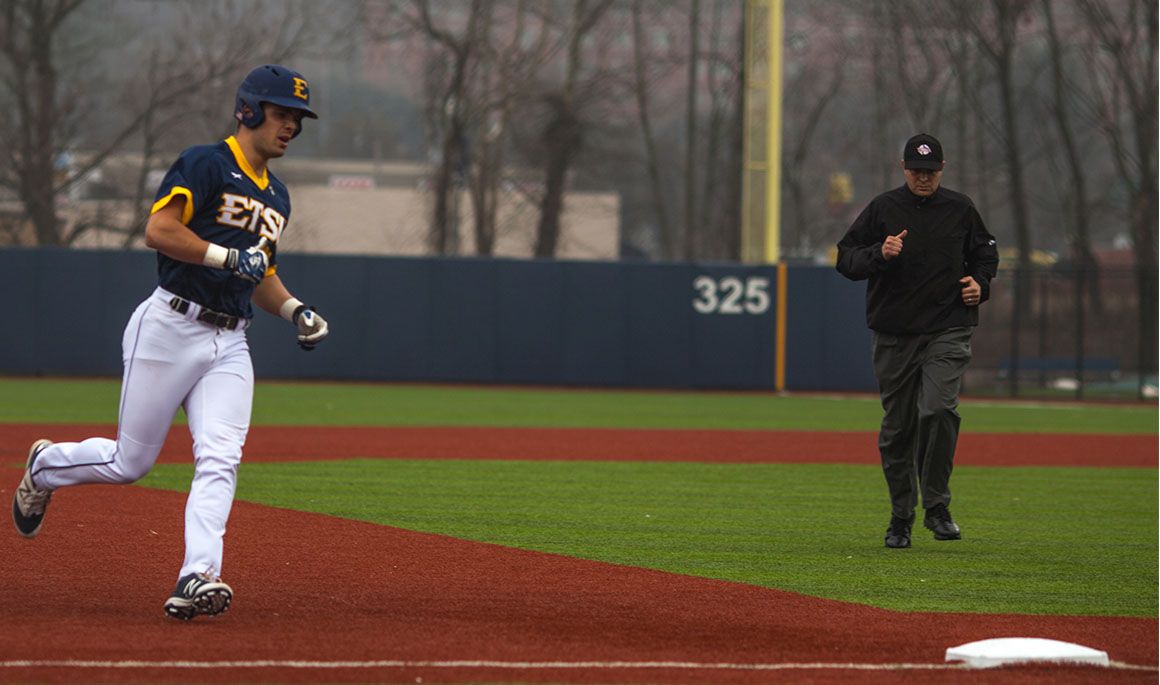 “It is hard to even describe right now. I went up 2-0 and knew a fastball was coming, so I just got ready for it. I put the barrel on it,” said Maher about his walk off home run. “We all had smart at bats, which let us get back into the game in the last three innings.”

Danny Carrier (Cincinnati, OH) came off the bench to play second base early in the game and took advantage of playing time by going 2-3 with a double and a single. He tallied a walk and a run scored in the first game. Kevin Phillips (St. Louis, Mo.) and Trey York (Knoxville, Tenn.) each had multi-hit games with each cracking a pair of singles.

The Buccaneer offense was able to get plenty of hits with eleven hits while scoring six times.

Purdue scored the first run of the game in the second inning with an Alec Olund bunt single. Victor Gonzalez (Mount Pleasant, S.C.) minimized the damage by getting a groundout to end the inning.

The Bucs retaliated in the bottom half with a four spot. To start off the inning, ETSU had four straight hits. Maher led the inning off with a single followed by York single to have runners on second and first. Rowlett turned on an inside pitch and drove it down the right field line for an RBI double. Longley matched Rowlett with a double and extended the lead to 3-1. Longley moved to third after a fly out, and scored on a Jeremy Taylor (Fayetteville, Ga.) bunt single.

The Boilermakers regained the lead by scoring seven straight unanswered runs to move the lead to 8-4 in the middle of the fourth. However, ETSU cut the lead down to two in the bottom of the fifth thanks to a fielding error and a balk by the Purdue defense.

The Blue and Gold could not slow down the Boilers’ offense as they struck for 11 more runs in the last four innings, highlighted by a Kyle Johnson grand slam to left field in the seventh inning.

The Bucs went on to lose game one 19-6, but ETSU came back in game two in cold and rainy conditions to split the doubleheader.

On a 2-0 count, Maher jacked a one out, three run jack to deep right center field to give the Bucs the walk off 9-8 victory in the ninth. He finished the second game with the homer, four RBIs, and two runs scored.

York exploded in the game going 3-4 with solo homer, two singles, two RBIs, and three runs scored. Rowlett had a two-hit game with a double and a single. He tallied a RBI and a run scored on the afternoon.

The pitching staff struck out nine batters and was led by Lee Haeblere’s (Hendersonville, Tenn.) six in 4.1 innings. Peyton Taylor (Kingsport, Tenn.) received the win and moved to 2-0 on the year.

After roughly a 30-minute break, Haeberle sat down the first three batters he faced to move quickly into the bottom half of the inning. ETSU struck for two runs in the bottom of the first. Taylor was hit by a pitch to lead off the inning, and York singled to left field to put runners at first and second. Owenby then was plunked to put ducks on the pond for Phillips. After falling behind 0-2, he drew a walk to get one run on the board. Maher followed with a sacrifice fly to left and gave the Blue and Gold a 2-0 advantage.

ETSU padded their lead in the bottom of the second. Jammer Strickland (Knoxville, Tenn.) walked in the inning and moved to second on a wild pitch with one out. York cracked a two out single to center to plate Strickland to give ETSU the 3-0 lead.

The Bucs were held scoreless over the next four innings and only had at most four batters in an inning come to the plate in that span. Purdue took advantage and plated seven of their eight runs in the fourth through sixth innings. Going into the seventh, the Boilermakers led 7-3.

York ended the scoreless streak by sneaking an opposite field solo homer over the right field wall.

Purdue threatened to add insurance in the top of the eighth, but left two runners stranded thanks to great relief pitching by Jamin McCann (Kingsport, Tenn.).

Maher walked to lead the eighth inning and scored off a gap splitting double by Rowlett. Rowlett moved to third on the throw by the outfielder. Andrew Lasure (Stanford, Ky.) came off the bench and spanked his first hit of the season to right field to plate Rowlett and move the score to 7-6.

Even with the momentum on ETSU’s side, Kyle Wood hit a mammoth homer to right center field on a 3-0 count. This gave the Boilermakers a two run advantage going into the bottom of the ninth.

York saw four pitches to lead off the inning and drew a walk. Owenby hit a single through the left side and put runners on first and second with no outs. Phillips made the Purdue pitcher work by getting a full count, but Phillips hit a soft grounder up the middle. He ran hard down the first base line to break up the double play and leave runners at the corners for Maher. With tension running, Maher took the first two pitches he saw and on the next pitch, laid the metal on a fastball right down the middle and jacked a walk off three run homer.

The Bucs and Boilermakers will square off in game four at Thomas Stadium on March 6. First pitch is set for 1 p.m. Ryan Simpler (Lewes, Del.) is set to make his third start of the season and looks to continue his success after his two inning shutout relief work against UNC Asheville. Purdue has not announced their starter for the rubber series.