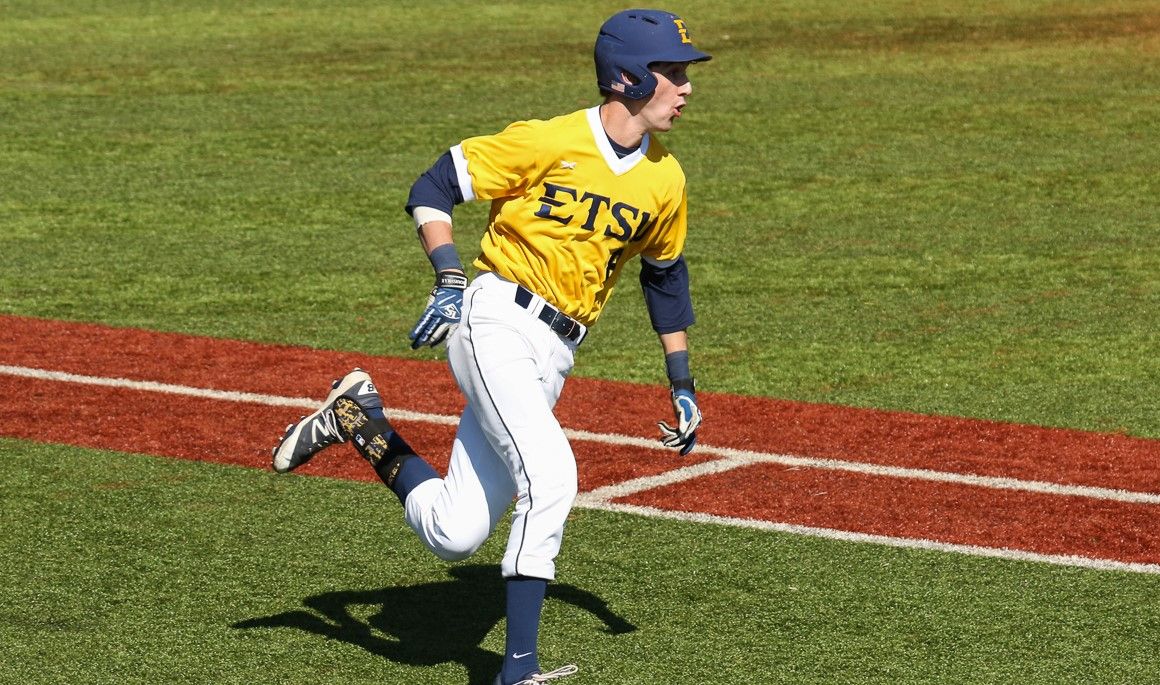 JOHNSON CITY, Tenn. (March 6, 2016) – Christian Bailey (Kingsport, Tenn.) started in his second game of the season for the ETSU baseball team and was perfect offensively in the 8-2 win over Purdue on Sunday to win the series 3-1.

Bailey went a perfect 3-3 with a solo homer that started the scoring for ETSU. He also connected with a double and a RBI single on Sunday. He finished the day with two RBIs, two runs scored, and a walk.

Andrew Lasure (Stanford, Ky.) hit a clutch, pinch hit opposite field home run that gave ETSU their first lead of the game. Blake Rowlett (Clarksville, Tenn.) went 1-4 with a two RBI single that added insurance late in the game, and Hagen Owenby (Knoxville, Tenn.) finished the afternoon with a 1-3 performance with a RBI, run scored, and a walk. Eight batters had at least one hit versus Purdue today, and the Blue and Gold were 5-8 with runners in scoring position.

The Boilermakers scored the game’s first two runs in the first half of the game. One run scored in the second inning off a RBI single by Brett Carlson, and the second run came in the fourth off the bat of Nick Dalesandro.

In his time on the mound, Simpler had two perfect innings getting the first three batters he faced out. McCann came into the game in the sixth inning with one out and a runner on first. The first batter he faced reached base off a fielding error, but the next batter McCann saw, he forced him to ground into an inning- ending double play.

Bailey led off the bottom of the sixth for ETSU and scored the first run of the game for the Blue and Gold off a full count, solo homer to left field. It was his first homer of his ETSU career and cut the lead to one run. The Bucs didn’t stop there as they eventually tied the game later that inning. Trey York (Knoxville, Tenn.) roped a double to left center with two outs, and Owenby hit a sharp line drive to center to score York from second. At the end of the sixth, the game was tied at two.

In the top of the seventh, McCann surrendered a single followed by a walk to have two runners on with one out. Just like he did the previous inning, he induced a double play to end the inning and conserve the tie.

The Bucs started the bottom of the seventh with back-to-back groundouts. However, Caleb Longley (Cleveland, Tenn.) connected with a single through the left side, and Bailey walked to put runners on first and second. Lasure came in to pinch hit and on the third pitch he saw, he snuck a three run, opposite field home run over the left field wall to advance the game to 5-2.

With a tag team effort by McCann and Koesters, they got the first three batters they faced out in the top of the eighth.

ETSU was able to add some insurance runs in the bottom half of the inning and did so with the bases loaded. Owenby walked early in the inning, and Phillips connected with a single to put two runners on. Aaron Maher (Brentwood, Tenn.) was drilled to put runners on every base for the Bucs. Rowlett smoked a single to right field that scored Owenby and Phillips from second. After a pitching change by Purdue, Lance Mays (Ridgely, Tenn.) singled to left, but Maher was gunned down by the left fielder at the plate. With two outs and two runners on, Bailey smacked his third hit of the game and scored Rowlett from second base to move the score to 8-2 in favor of the Bucs.

Josh Jacques (Rollinsford, N.H.) started the ninth inning for the Bucs and let up a walk. Taylor came in relief and shut down the Boilermaker offense after allowing just one hit while leaving two runners stranded.

“Really, my two-strike approach was effective today. I was trying to get the little things down and not try to do too much,” said Bailey. “We played as a team and never gave up. Once we got the lead, we were able to stick with it. The bullpen did great. We really improved on the little things today and tried not to do too much.”

ETSU will travel to Greensboro, N.C. to take on the Aggies of UNC A&T on March 8 at 3 p.m. The Buccaneers will then return home to square off against SEC foe Tennessee Volunteers at Thomas Stadium. First pitch for the Bucs and Vols game is set for 6 p.m.