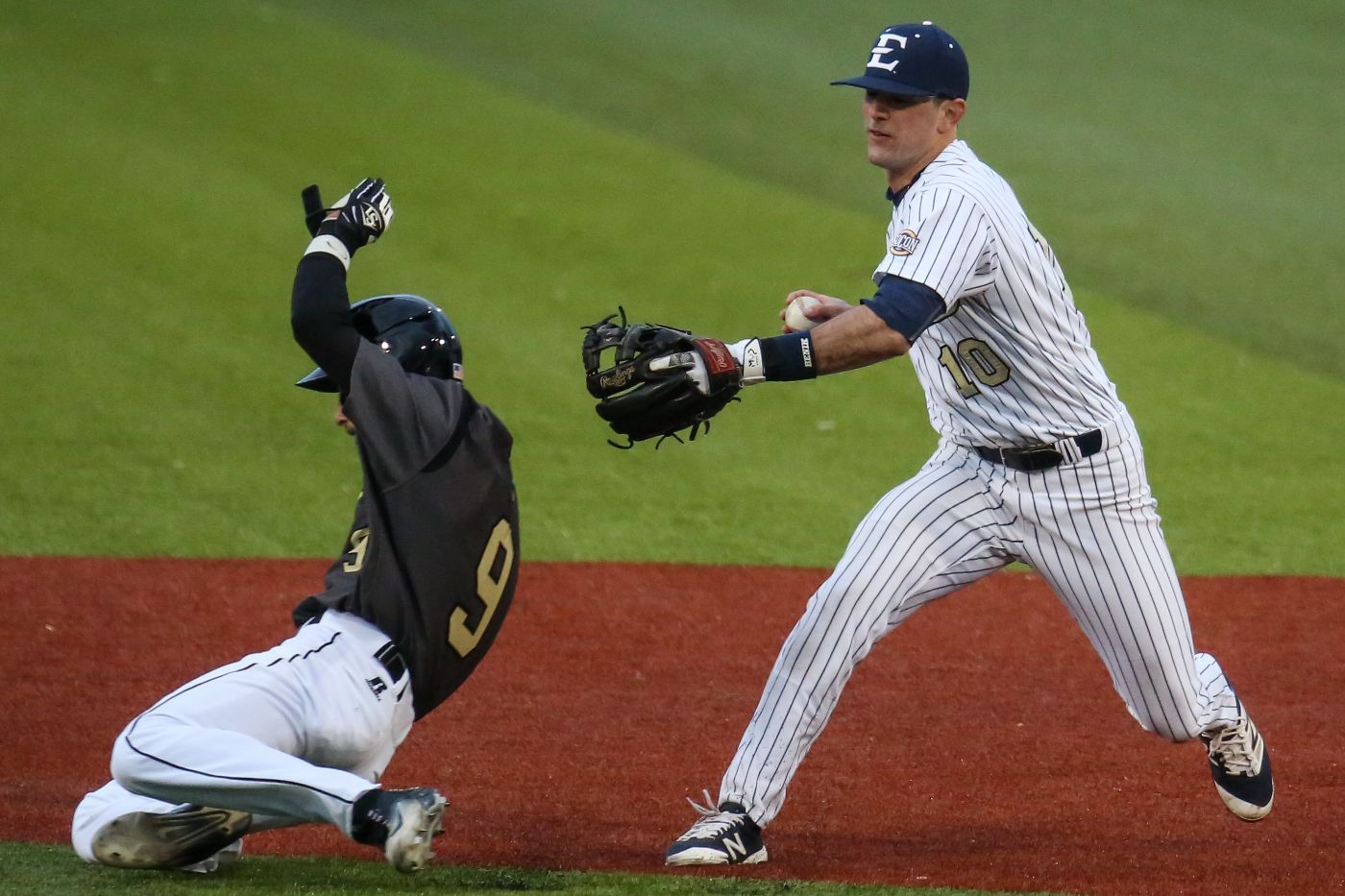 JOHNSON CITY, Tenn. (March 7, 2016) – The ETSU baseball team will welcome the Tennessee Volunteers to Johnson City on March 9 and will travel to Greensboro, N.C. on March 8 to square off against UNC A&T.

The Buccaneer offense had five players tally a hit on Friday highlighted by an RBI single by Aaron Maher (Brentwood, Tenn.) and a RBI triple by Chris Cook (Kingsport, Tenn.) to lead the Bucs to a 4-2 win.

On Saturday night, Maher jacked a one out, three run home run to deep right center field to give the Bucs the walk off 9-8 victory in the ninth. He finished the game with the homer, four RBIs, and two runs scored. Trey York (Knoxville, Tenn.) exploded in the game going 3-4 with a solo homer, two singles, two RBIs, and three runs scored. Blake Rowlett (Clarksville, Tenn.) had a two-hit game with a double and a single, and he tallied a RBI and a run scored on the afternoon.

Bailey went a perfect 3-3 with a solo homer that started the scoring for ETSU on Sunday. He also connected with a double and a RBI single to cap off his second start of the season. He finished the day with two RBIs, two runs scored, and a walk.

Andrew Lasure (Stanford, Ky.) hit a clutch, pinch hit opposite field home run that gave ETSU their first lead of the game in the bottom of the seventh. The Blue and Gold were 5-8 with runners in scoring position, which was the best in the series against Purdue.

The pitching staff was big key for ETSU this weekend. Blake Smith (Ninety Six, S.C.) started the game on Friday and went 5.2 innings with two runs to score. He struck out five Boilers in the game. Ryan Simpler (Lewes, Del.) tossed one his best games of the season on Sunday as he went 5.1 innings with five strikeouts and two runs allowed. The bullpen was also strong this weekend and was highlighted by Griffin Krieg (Nashville, Tenn.), Peyton Taylor (Kingsport, Tenn.), and Jamin McCann (Kingsport, Tenn.). Krieg went 4.2 innings in relief with one earned run and four strikeouts. Taylor tossed in three games with just one run to score in four innings of work. McCann hurled 2.1 innings of scoreless ball in the four-game set.

Nick Senzel is the player to watch for on Tennessee. He has played in 113 games from since his freshman season for the Vols and totes a career .330 batting average. He has been nominated as a 2016 Preseason All-American by Perfect Game, Collegiate Baseball/Louisville Slugger, D1Baseball.com, and Baseball America. He was also selected as a Top 50 MLB Draft Prospect (No. 14) by MLB.com & a Top 100 Draft Prospect (No. 5) by Baseball America, and he was also Cape Cod League’s 2015 Most Outstanding Pro Prospect. So far this season, he has started in all ten games with 17 hits with six doubles and 17 RBIs. He has a batting average of .425 and slugging percentage of .575. He has only struck out four times all season and walked nine times.

Another player to keep an eye on is Jordan Rodgers who has shown power in his swing. He has seven extra base hits this season with four doubles, one triple and one homer. He has tallied 20 RBIs and eight runs scored. Vincent Jackson is another Vol to watch for on Wednesday as he sports a .375 batting average and leads the team in homers (3). He has driven in 12 RBIs and scored 13 times this season.

As for pitching, their staff is top notch as they have a team ERA of 4.04. Two of their main starters (Zach Warren and Hunter Martin) have an ERA below 2.00. Warren has won every game he has started and leads the team in innings pitched (16.2) and strikeouts (17). He has only allowed 13 hits all season with three being doubles. Martin is 1-0 this season and has tossed 12.2 innings with only two earned runs. He isn’t the type of pitcher that is going to strike a lot of players out, but batters hit the ball and let his defense do the work.

Jon Lipinski has been a solid pitcher to close out games for UT as he totes a 2.45 ERA in three games pitched. He has picked up a save every time he has toed the rubber. Lipinski has allowed just one run to score in his 3.2 innings of work.

The Bucs and Vols played a home and home series last year, and Tennessee got the best of ETSU sweeping the two-game series. Last year in Knoxville, ETSU gave Tennessee a run for their money but ultimately fell 5-2 at Lindsey Nelson Stadium.

Tennessee leads the all-time series, 60-16, but the Bucs have won seven of the last 12 and nine of the last 17 against the Vols, including a series-sweep over their in-state rival in 2014.

This will be the first streamed broadcast of the season on the SoCon Digital Network. Jay Sandos will be the play-by-play on the SDN along with color by Parker Schwartz. There will be live stats for the game, and that can be found by clicking here.

Kyle Clary is leading the Aggies this season as he sports a .304 through the first eight games. Milton Rivera has been a power force for UNC A&T as he has five homer to his name through the first eight games. Rivera has started in all the games for the team and looks to continue his success. Offensively as a team, they have a low batting average with a .212. They strike out an average of ten times a game and hardly ever walk. Their slugging percentage is very low as a team, so they get a lot of singles.

Pitching-wise, the Aggies have been hit around at the beginning of the season. The team sports an 8.28 ERA with 70 runs scored through eight games. The staff has an average .318 batting average against, and they don’t strikeout a lot of batters (52) and walk a fair number of opponents (55).

Even though they have struggled early, they are coming off a series win versus Iona. The Aggies took the first two games by a score of 14-13 and 12-5 at home. They have a 3-7 record at War Memorial Stadium. UNC A&T totaled six homers in the three-game series and have a total of 14 on the season.

The Bucs and Aggies have only met eleven times in their history, and the Buccaneers are 10-1 against them. The last time the two teams met was in 2002 when ETSU swept a three-game series. ETSU’s only loss came in 1992 when UNC A&T won 9-2.

The Blue and Gold will return home for two, three game series starting off with La Salle. The first game of the series will be on March 11 at 6 p.m. at Thomas Stadium the second and third games will start at 2 p.m. and 1 p.m., respectively. The Bucs are 2-2 against the Explorers, and the last time the two teams met was in 2002. The second series of the home game stretch will be former A-Sun competition FGCU.