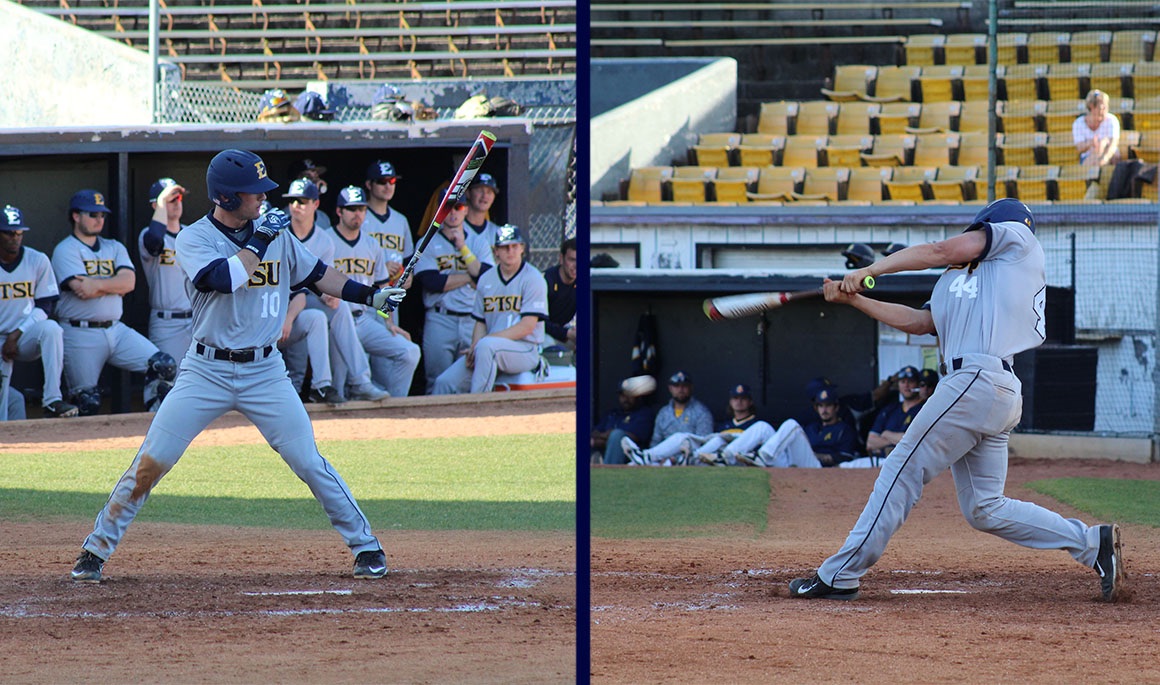 Trey York (Knoxville, Tenn.) led the Buccaneers going 4-5 with a pair of two-baggers and two singles against NC A&T. He drove in two RBIs and touched home twice in the game. Hagen Owenby (Knoxville, Tenn.) flexed his muscles for his second game of the season with two homers in one game. He finished the game going 3-5 with three RBIs and three runs scored.

Robby McCabe (New Port Richey, Fla.) started his first game of the year and took advantage by going 3-5 with a two run homer while driving in a trio of RBIs while touching home twice and walking once. Christian Bailey (Kingsport, Tenn.) and Blake Rowlett (Clarksville, Tenn.) had a pair of hits today. Rowlett smoked a solo homer that flew over the fence just right of center field, and Bailey connected with his second double of the season against the Aggies.

In his first start of the season on the bump, Russell Koesters (Kingsport, Tenn.) tossed four innings with just one run on six hits. He struck out a pair and walked just one. Zach Thompson (Ooltewah, Tenn.) came in relief and worked a perfect fifth and sixth innings getting the first six batters he faced to ground or fly out. Josh Jacques (Rollinsford, N.H.) tossed two scoreless and hitless frames with three strikeouts.

The Bucs tallied 17 total hits with eight extra base knocks. The Blue and Gold were walked 11 times, which is a season high for the team. The Buccaneers were 7-16 with runners in scoring position including five two-out RBI base knocks. The team scored at least one run in seven of the nine innings.

ETSU struck early and often to put up six unanswered runs in the first three innings. The Bucs had three runs in the first inning, which was highlighted by two-run homer by Owenby. Jeremy Taylor (Fayetteville, Ga.) led off the game with a walk and moved to second after a failed pickoff attempt. York then tattooed a double to centerfield to get the first run in the game. Owenby followed by cranking a homer that cleared the bases and got the Bucs on top 3-0.

York scorched his second double of the day to score one of the runs in the top of the second. On the next batter, the Aggie pitcher threw a wild pitch and a hustling York was able to score from second due to the ball ricocheting off the backstop. With the bases cleared, Owenby spanked a ball down the leftfield line to get his third double of the year. He moved to third on a hit by Phillips and scored on the second wild pitch of the inning.

The Bucs scored their sixth run in the third inning off an error by the Aggies. The Aggie pitcher tried to pick Taylor off, but the ball rolled away from the first baseman. Taylor was able to get to third easily, but he scored on the throw at home.

NC A&T tacked on their first run of the afternoon in the bottom of the third off two doubles in the inning. However, ETSU regained the run with a three-spot in the fourth. Owenby led the top of the fourth with a crushed homer to left field followed by McCabe’s first hit of the year, which was a two-run home run down the left field line. The Bucs found themselves up 9-1 at the end of the fourth.

Neither team plated a run for the next two innings. The Blue and Gold threatened with runners at the corners with one out in the sixth but didn’t plate a run after the Bucs hit into an inning-ending double play.

ETSU struck for three more unanswered runs in the seventh and eighth. The Bucs scored two in the seventh from a balk by the NC A&T pitcher and from a RBI single by York through the right side. Going in the bottom of the eighth, ETSU led the Aggies 12-1.

NC A&T found some offense by plating four runs in the bottom half of the eighth. The Aggies plated three runs off three straight hits. The Aggies tacked on one more run later in the inning off a sacrifice fly to right field.

In the ninth, the Bucs regained those runs surrendered with a five spot. ETSU led the inning off with back-to-back walks followed by Dillon Clift’s (Soddy Daisy, Tenn.) first hit of the season. With the bases loaded, Jammer Strickland (Knoxville, Tenn.) walked to score one. After a pitching change, NC A&T was able to induce a double play, but let up another Buccaneer run to score. McCabe followed with a RBI single to plate Clift from third base. Bailey added two more runs off his double to center field. ETSU found themselves up 17-5 going into the bottom of the ninth.

Jacques forced the first two batters he faced in the ninth to fly out and ground out, and he finished the game with a swinging strikeout.

East Tennessee State University will be the first to host the home and home series with the University of Tennessee. The game between the Bucs and Vols is scheduled for March 9 at Thomas Stadium. First pitch for the game is 6 p.m. The game will be streamed on the SoConDigitalNetwork.com, and play-by-play will be done by Jay Sandos and will be assisted by Parker Schwartz.