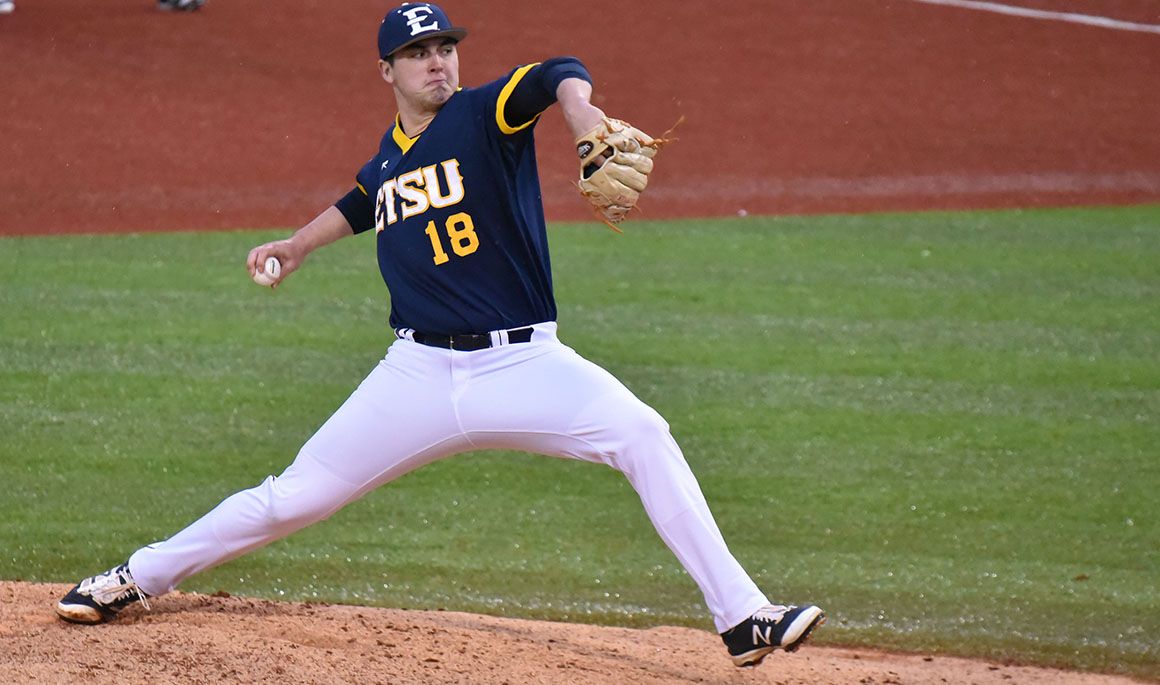 JOHNSON CITY, Tenn. (March 10, 2016) –.The ETSU baseball team will host La Salle as the sixth team to play inside Thomas Stadium this season, and the series opener against the Explorers will start on March 11 at 6 p.m.

Senior Trey York (Knoxville, Tenn.) recorded his third home run of the season after connecting on a two-run bomb in the bottom of the third inning … York – who went 2-for-4 with two RBI and extended his hit streak to seven straight games.

Senior Jeremy Taylor (Fayetteville, Ga.) posted his third multi-hit game of the season after going 2-for-3 with one walk and one run scored.

Junior Blake Smith (Ninety Six, S.C.) suffered the loss after allowing five runs on three hits in one-third of an inning, while Aaron Soto earned the win (1-0) for the Vols. Soto issued two runs on two hits and struck out two in three innings of relief. Tennessee’s bullpen retired 18 of the final 21 ETSU hitters to end the game. Steven Kane (2.0 IP), Jon Lipinski (1.0 IP), Quint Robinson (1.0 IP) held the Bucs hitless in the final four innings, while striking out four and walking one.

As a team, Tennessee out-hit the Blue and Gold, 14-4, while Nick Senzel, Leno Ramirez and Derek Lance all finished with two-hit nights in the winning effort.

ETSU had its three-game win streak snapped and dipped to 7-6, while Tennessee – who had lost back-to-back games – improved to 8-4.

After a 24-27-1 record in 2015, La Salle has started the 2016 campaign in a lull. The Explorers lost their first seven games to Winthrop and Elon on the road. Their first win came against Presbyterian College in Clinton, S.C. in which they won 6-3. The Explorers come to Johnson City on a four-game losing streak after losing the last two games to Presbyterian and getting swept against High Point.

La Salle as a team is batting .191 collectively and being led by freshmen Kevin McGowan and Jared Melone. McGowan has started in eight games and has totaled nine hits, which were all singles. Melone has been the strongest offensive force for the Explorers as he has four doubles and seven RBIs, which leads the team.

The visitors are scheduling to send Joey Ravert to the mound Friday to face the Bucs. He is coming off his best outing of the season as he went seven innings with six hits, two runs, and four strikeouts. He picked up the only win for La Salle this season as his team tallied six runs in the game versus Presbyterian.

Several bullpen pitchers for La Salle have been the highlight of the season. CJ Pruitt and Mike Anthony has totaled 14 innings combined with just three earned runs. Both of their batting average against numbers are below .300, but they have combined for nine walks this season with just three strikeouts each. Both relievers have a sub-3.00 ERA in the ten combined appearances so far.

The Bucs and Explorers have only met four times in their history. The Buccaneers have taken two of the games from La Salle, and the last time the two teams met was back in 2012. ETSU won the three-game series by taking the opening and rubber games of the series. The Bucs outscored La Salle 27-15 in the three-game set.

Head coach Tony Skole will give junior RHP Smith the starting nod for Friday. He is coming off a rough outing against Tennessee where he came out of the bullpen for the first time this season, but in his previous outings, he totaled 16 innings and just four runs to score. La Salle will counter with Ravert who will make his fourth start of the year.

Haeberle will toe the rubber for the Saturday game and looks to continue off his current success on the hill. He started against the Vols and went two innings with four strikeouts. He has the lowest ERA of all starters for ETSU with a 3.86 ERA and has 17 strikeouts, which leads the team. The Explorers will send LHP Luke Reilly to the bump on Saturday to face Haeberle. Reilly has a 0-2 record with a 4.40 ERA in three starts.

Ryan Simpler (Lewes, Del.) will round out the weekend rotation for the Blue and Gold as he starts in his 13th career game at ETSU. Simpler has hurled 11.2 innings this season and has a good strikeout to walk ratio of 4:1. Head coach Mike Lake of La Salle has yet to name a starter for the afternoon game on Sunday.

ETSU will have played in 10 games in the last 12 days at the conclusion of the La Salle series. The Bucs will have five days off before hitting the field again and welcoming former A-Sun foe FGCU. The Eagles are currently 4-8 but have played against two ranked teams: No. 1 Florida and No. 5 Miami. FGCU will have a two-game set with Rutgers on March 15 and 16 before coming to Johnson City. The first game is set for March 18 at 6 p.m. The final two games will be held at Thomas Stadium on March 19 and 20 at 2 p.m. and 1 p.m., respectively.