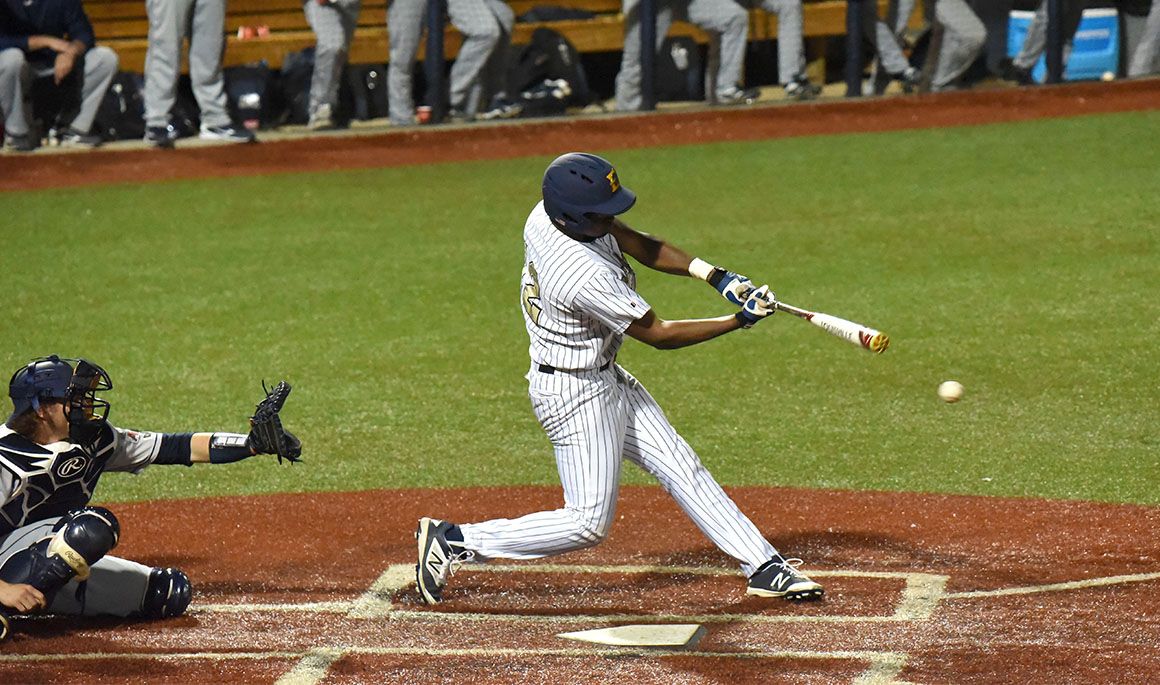 Johnson City, Tenn (March 11, 2016) – Despite a quality start and three home runs for ETSU, La Salle rallied for five runs in the last three innings to complete the 6-4 comeback to win the first game of the series on Friday night at Thomas Stadium.

Trey York (Knoxville, Tenn.) led the team today as he got ETSU on the board first in the fourth inning as he connected with a solo shot to left center. Kevin Phillips (St. Louis, Mo.) was the lone Buccaneer to have a two-hit game with a double down the left field line and a single. Phillips had one RBI and a run scored in the series opener with La Salle.

Blake Rowlett (Clarksville, Tenn.) extended the lead for ETSU in the sixth with a two run mammoth homer to right. This was Rowlett’s second homer of the year and his second in the last three games.

La Salle threatened in the inning as they had a lead off walk in the inning and stole second with one out, but Smith struck out his third batter of the afternoon and forced his sixth ground out in the game.

York led off the inning with a towering solo shot to deep left center field to put the Bucs ahead 1-0. This was his fourth of the year and has homered in back-to-back games. Phillips connected with a double down the left field line with no runners on to put the Buc in scoring position of the night. Robby McCabe (New Port Richey, Fla.) walked with two outs to put runners at the corners, but ETSU couldn’t extend their lead as they finished the inning with two runners stranded.

Chase Arnold led off the inning for the Explorers with a walk, and Connor Hinchliffe roped a screaming single to right field to put two runners on with no outs. Collin McGowan put a sacrifice bunt in play to put runners in scoring position. Kevin McGowan hit a soft grounder to first, but Smith missed the bag while field the toss from Phillips. La Salle was able to knot the game up at one.

Smith came out firing and forced the first batter he faced to ground out. He followed by striking out the next batter looking and forcing another ground out.

To get back in the lead, Phillips crushed a solo homer for the second leadoff homer of the day. The ball hit off the scoreboard in left field and gave ETSU the 2-1 lead. McCabe laid down a sacrifice bunt that put Aaron Maher (Brentwood, Tenn.) on second after his walk. Rowlett came up to bat for the Blue and Gold and spanked his second homer of the year to right field to give ETSU the 4-1 lead.

The Explorers cut into the lead with back-to-back solo home runs by Arnold and Hinchliffe as they pulled within one run. These two homers doubled their season total on the year.

Peyton Taylor (Kingsport, Tenn.) struck out the first two batters he saw, but he surrendered a single through the right side followed by a walk. Arnold came back up to the plate and blooped a single in left center to tie the game at four.

Brian Tagoe got things started for La Salle in the top half with a one out single. Kevin McGowan popped out to short to make it two outs, but Tagoe stole second on the next pitch to get into scoring position. Jared Melone took advantage by connecting with a RBI double that hit off the left center field wall, and La Salle gained their first lead of the afternoon. The Explorers didn’t stop there as Ravert smoked a single up the middle to make it a 6-4 advantage. Taylor got the third out by forcing the La Salle batter to fly out to left.

Lance Mays (Ridgely, Tenn.) tried to start a rally on the second pitch he saw when he roped a single to center, but the ETSU offense couldn’t score him to end the game at 6-4.

Taylor was pinned with his first loss on season, and Jorge Jimenez earned his first win of the season. The Bucs fall back to .500 at 7-7, and the Explorers earn their second win of the year.

ETSU will now host games two and three tomorrow starting at 2 p.m. The game originally scheduled for Sunday will be the second game of the afternoon. Lee Haeberle (Hendersonville, Tenn.) and Ryan Simpler (Lewes, Del.) are expected to start the doubleheader Saturday.