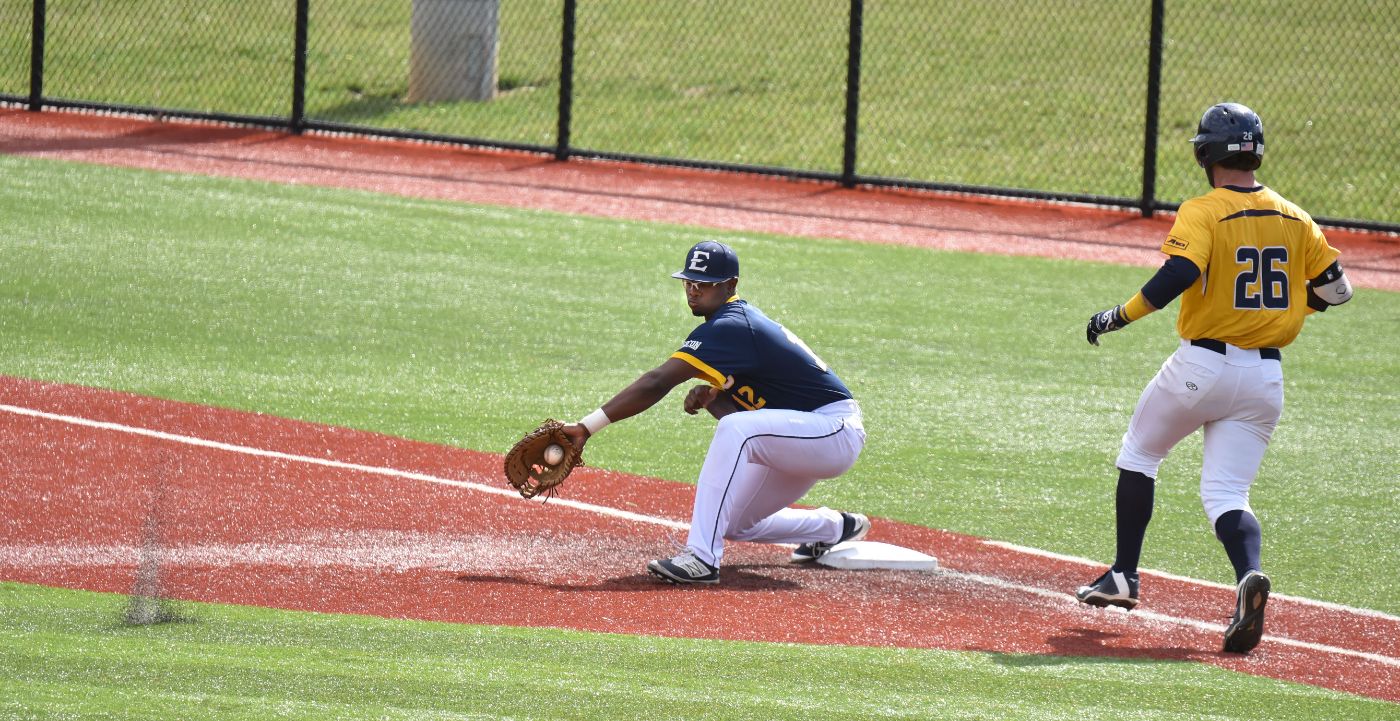 JOHNSON CITY, Tenn. (March 12, 2016) – ETSU baseball split with La Salle after the Bucs made a 6-3 comeback in game one but fall in game two 9-4 at Thomas Stadium on Saturday.

Senior right-hander Lee Haeberle (Hendersonville, Tenn.) struck out a career-high nine (zero walks) in eight innings of work, while the ETSU offense rallied with a four-run eighth inning to even the series as the Buccaneers defeated LaSalle, 6-3, in game one of Saturday’s doubleheader from Thomas Stadium.

Lee Haeberle earned his first win of the season (1-0) after giving the Blue and Gold a quality start (2 ER/8.0 IP), while his nine strikeouts and eight innings bested his previous high of seven which was set last year against UNCG (March 28, 2015).

Senior left-hander Josh Jacques (Rollinsford, N.H.) collected his second collegiate save after coming into a one-out bases loaded situation in the top of the ninth and inducing Kevin McGowan into a game-ending 6-4-3 double play.

Haeberle and Jacques did an outstanding job working out of several jams as LaSalle went 0-for-9 with runners in scoring position.

Senior infielder Trey York (Knoxville, Tenn.) extended his hit streak to nine straight games after going 2-for-4 with one walk and one RBI … York drove in one of the four runs in the eighth inning with a single to left-center.

Sophomore outfielder Aaron Maher (Brentwood, Tenn.) ignited the rally by leading off the eighth with a single to right, while he scored the tying run on a balk by James Santore … Maher finished with two hits and scored two runs.

Sophomore Hagen Owenby (Knoxville, Tenn.) joined York and Maher with two-hit games as the Buccaneer catcher registered two singles and drove in a run in the eighth inning.

In total, seven ETSU hitters posted at least one hit as the Buccaneers recorded double-digit hits (10) for the eighth time this season … ETSU’s 1-thru-5 batters combined for eight hits, three runs and two RBI.

LaSalle catcher Connor Hinchliffe led the Explorers with two hits … Overall, LaSalle ended with nine hits as a team. Junior southpaw Jorge Jimenez – who earned the win in Friday’s opener – suffered the loss (1-4) after allowing three runs on two hits and a walk. Jimenez didn’t register an out in his relief appearance.

The Explorers scratched the first run of the game as Chase Arnold led off the second inning with a single up the middle – and after advancing to third on Connor Hinchliffe’s single to right – the LaSalle designated hitter scored on Kevin McGown’s sacrifice fly to center.

ETSU answered the challenge in the bottom half of the frame when Kevin Phillips (St. Louis, Mo.) poked a single through the right side to lead things off and moved to third on Aaron Maher’s ground-rule double to center. Phillips eventually scored on a wild pitch from Greg Paprocki, while Maher hustled home on Blake Rowlett’s (Clarksville, Tenn.) sac-fly RBI to center, making it a 2-1 score.

After both teams combined for the three runs in the second inning, the game became a pitcher’s duel as the Buccaneers and Explorers were held scoreless during the next four frames until LaSalle plated solo runs in the seventh and eighth innings to go ahead, 3-2. The Explorers tied the game when McGowan scored after McCabe dropped what would’ve been the third out of the seventh inning at short, while a one-out opposite field solo homer by Joey Ravert put the visitors from Philadelphia ahead by a run an inning later.

Fortunately, the comeback Bucs ignited the eighth-inning rally to pick up their third win of the season when trailing in the bottom of the eighth inning. The first four ETSU batters reached to begin the frame, as Maher singled, McCabe walked, Rowlett reached on a bunt single and Christian Bailey (Kingsport, Tenn.) was hit by a pitch. Maher scored the first run on the balk, while Carrier’s sac-fly brought home McCabe and Rowlett came in on York’s RBI single to left-center. Owenby capped off the scoring spree with a fielder’s choice RBI ground out to short, making it a 6-3 advantage.

The Explorers had one last fight in them as Russell Koesters (Kingsport, Tenn.) started the ninth inning, but after only recording one out and loading the bases, he turned the ball over to Jacques – who induced the inning-ending double play for the win.

The Explorers and the Buccaneers played even through four innings. ETSU plated their only runs off an RBI double by Maher in the third inning and Lance Mays (Ridgely, Tenn.) scoring on a wild pitch in the fourth.

However in the top half of the fifth, La Salle opened the game with a five run inning, which was highlighted by a bases clearing double by Chase Arnold.

They extended their lead in the six with a solo homer to move the score to 8-2. McCabe tried to rally the troops in the eighth after he snuck his second homer of the year over the left field wall. He pulled the lead within five, but the Bucs couldn’t pull closer as the Bucs fall in game two to La Salle.

Mays provided half of the total offense for ETSU as he tallied a double and two singles.

Unfortunately, York’s hitting streak ended at nine games as he was held hitless in the nightcap.

Ryan Simpler (Lewes, Del.) was tagged with the loss and the Bucs fall back to .500 at 8-8. ETSU’s next series will start on February 18 against former A-Sun foe FGCU at Thomas Stadium. First pitch for Friday’s game is set for 6 p.m.