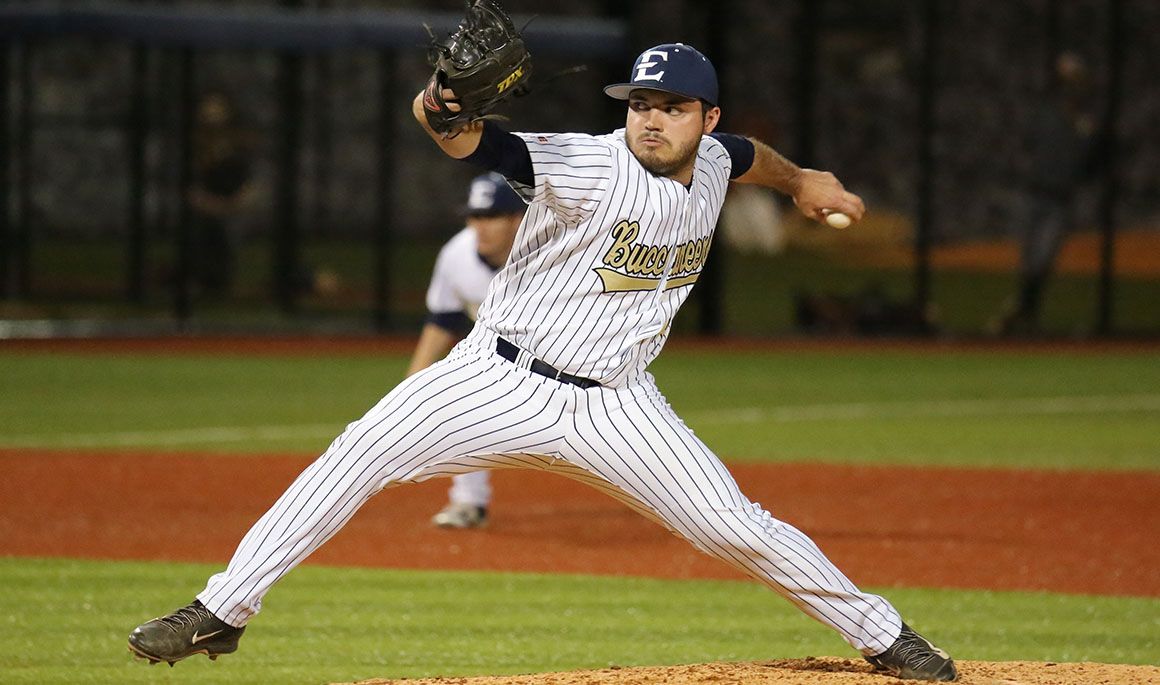 JOHNSON CITY, Tenn. (March 17, 2016) – The ETSU baseball team has taken five days off to prepare for former A-Sun rival FGCU in the weekend series starting on March 18 at Thomas Stadium at 6 p.m.

The Explorers took two games away from the Blue and Gold, but ETSU earned the win in game one on Saturday by a final score of 6-3. La Salle took games one and three 6-4 and 9-4, respectively.

In game one, the Bucs had a 4-3 lead going into the eighth inning, but La Salle struck for three unanswered runs in the last two innings. ETSU let up their lead in game two but fought back with four runs in the eighth to snatch the win over La Salle.

Trey York (Knoxville, Tenn.) led the team this weekend as he went 3-11 with a solo homer and two singles while tacking on two RBIs and four walks in the three-game set. Blake Rowlett (Clarksville, Tenn.) and Kevin Phillips (St. Louis, Mo.) each tacked on a homer on Friday, and Hagen Owenby (Knoxville, Tenn.) and Aaron Maher (Brentwood, Tenn.) each totaled two hits in the first game on Saturday. Lance Mays (Ridgely, Tenn.) had his best offensive game of the season in the third game as he went 3-4 with a run scored.

Lee Haeberle (Hendersonville, Tenn.) and Blake Smith (Ninety Six, S.C.) had quality starts this past weekend. Smith hurled Friday as he went six innings with just one run scored off three hits. He walked one and struck out six against La Salle. Haeberle had a career night as he totaled the most personal innings pitched (8.0) and strikeouts (9) in an outing. He earned his first win of the season and moved his strikeout total to 26.

FGCU is 8-10 on the season and are coming off a two-game split with Rutgers in Fort Myers, Fla. The Eagles took game one 9-6, and the Scarlett Knights won game two 9-2. The series before Rutgers, FGCU faced Quinnipiac for a four-game set and nearly completed the sweep but lost game three 10-9. The Eagles haven’t had an easy schedule this season as they have met with Michigan State, Bethune-Cookman, #5 Miami, and #1 Florida.

Jake Noll has been the offensive workhorse for the Eagles this season as he has started in all 18 games and leads the team in hits (31), homers (5), triples (1), doubles (6), runs (21), RBIs (26), and slugging percentage (.651). He has the second-most errors on the team with four and has swiped four bases on the year. Colton Bottomley is a senior outfielder who leads the team in batting average (.378) and has started in all 18 games for the Eagles. Bottomley has ten strikeouts and walked six times. Nick Rivera is another player for FGCU who can show power this weekend as he totes a .466 slugging percentage and has gap-to-gap power.

Brady Anderson has been the most talented starting pitcher as he started in four games. He has totaled 24.2 innings of work with 19 strikeouts and just five earned runs. He has a .260 batting average against and allowed just four extra base hits all season. His brother, Garrett Anderson, has been solid out as he has 16.1 innings under his belt with four runs scored and just one lone walk. He has started just one game and appeared in seven. Both pitchers have a 2.20 ERA or lower this season. Sterling Koerner and Ryan Lang had their share of starts and relief appearances. Lang has made five appearances out of the bullpen and has totaled 27.2 innings with 19 runs allowed, which is the most on the team.

As a team, the pitchers average a 5.19 ERA and have allowed 101 runs with 90 earned runs. They have struck out 119 batters with 64 walks. They also have surrendered 49 extra base hits with ten homers and 37 doubles. Offensively, the Eagles has a .280 batting average and struck out 153 times and walked 73 times.

The Bucs and FGCU used to be A-Sun Conference foes, but since the Bucs left the A-Sun, the two teams haven’t met since 2014. During that 2014 season, the Eagles swept the three-game set. The last time ETSU took a game away from FGCU was in 2013 when the Blue and Gold won 3-2 behind a Kerry Doane complete game performance.

Brady Anderson and Blake Smith will be the marquee matchup of the series as both have been workhorses for both teams. Smith is 1-2 for ETSU with a 4.03 ERA and a .256 batting average against. He has totaled 20 strikeouts in 22.1 innings of work.

Haeberle has been the most consistent starter for the Bucs lately, and he has a 1-0 record with a 3.20 ERA in the four starts this season. He leads the team in strikeouts with 26 and has let up just seven earned runs in 19.2 innings.

The Buccaneers will take Monday off as they prepare to hit the road against Winthrop in Rock Hill, S.C. ETSU will follow up by opening SoCon play with Western Carolina in Cullowhee, N.C. for a three-game set with the Catamounts on March 24 at 5 p.m.