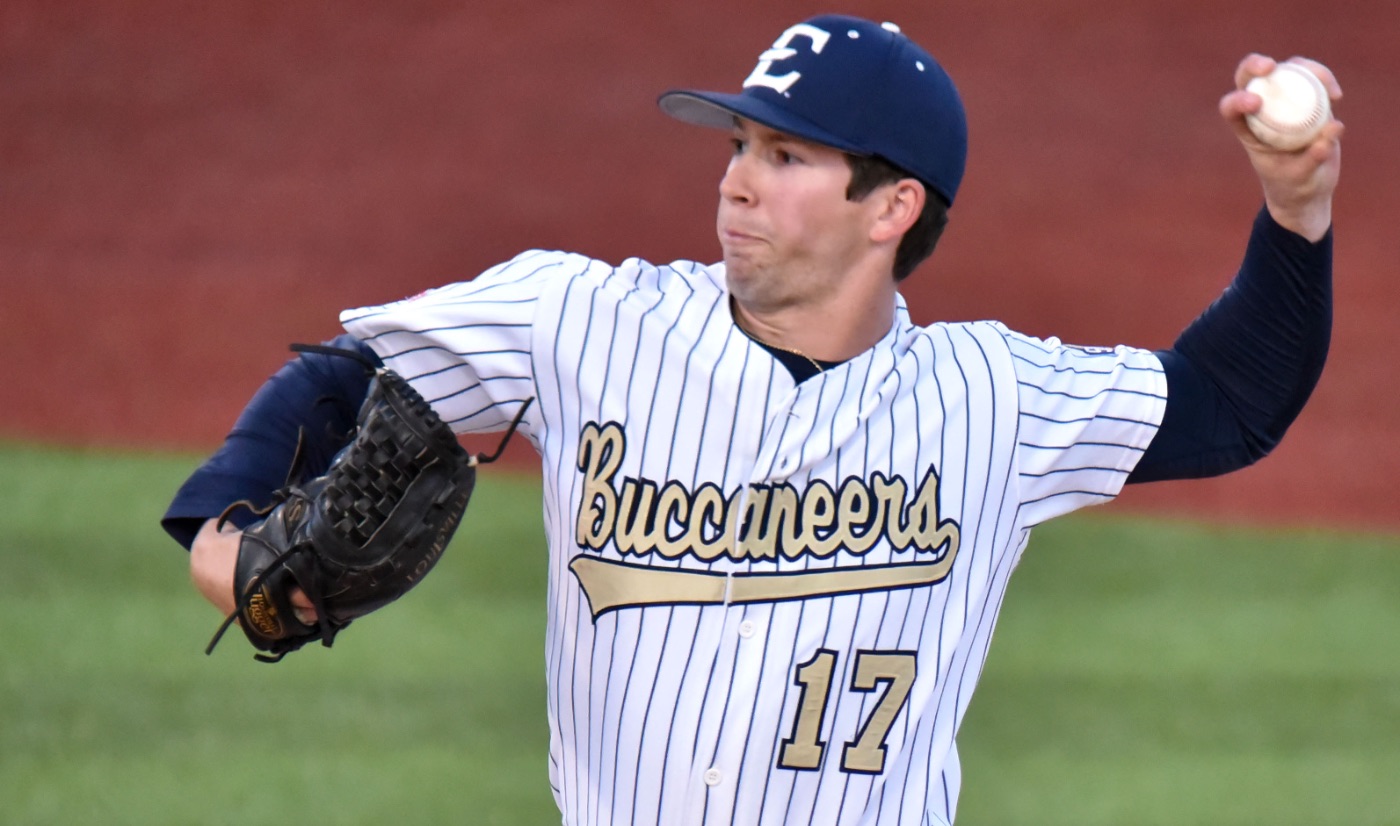 JOHNSON CITY, Tenn. (March 18, 2016) – Despite getting five scoreless innings from its bullpen, the ETSU baseball team was unable to dig out from an early deficit as Florida Gulf Coast dealt the Buccaneers a 7-4 setback on Friday night at Thomas Stadium.

Junior left-hander Jamin McCann (Kingsport, Tenn.), along with seniors Griffin Krieg (Nashville, Tenn.) and Josh Jacques (Rollinsford, N.H.) were untouchable out of the pen as they combined for the five scoreless frames and allowed only two hits.

McCann – who worked out of a bases loaded situation in the top of the fifth inning – gave the Blue and Gold three scoreless innings, while allowing one hit and two strikeouts. Meanwhile, Krieg held the Eagles to one hit in 1.1 innings and Jacques kept a pair of FGCU runners stranded by getting the final two outs in the ninth inning.

Offensively, the Blue and Gold out-hit the visitors from Ft. Myers, 11-9, as sophomore outfielder Aaron Maher (Brentwood, Tenn.) led the charge with a three-hit night (two singles and one double).

Senior outfielder Jeremy Taylor (Fayetteville, Ga.) reached a historic milestone as his leadoff infield single in the bottom of the first inning marked his 200th collegiate hit. Taylor also scored one of the four runs on the night.

The Bucs had their chances; however, the Blue and Gold left 10 runners stranded, and went 3-for-15 with runners on base and 2-for-8 with runners in scoring position.

FGCU had three of its players post two-hit games as Matt Reardon, Tyler Selesky and Matt Roberts combined to go 6-for-13 with two doubles, three runs and three RBI. Joining the trio was Jake Noll – the Atlantic Sun Preseason Player of the Year – who had a four-RBI night. Noll belted a two-run home run in the first inning and also had a pair of sacrifice flies.

Red-shirt senior right-hander Brady Anderson earned the win (2-3) as he allowed four runs on 10 hits in eight innings of work. Anderson – who entered the night with a 1.82 ERA – struck out three and walked two. Sophomore righty Christian Townsend earned his first save of the year as he pitched the final inning to close it out for the Eagles.

Following the setback, ETSU moved to 8-9, while FGCU improved to 9-10.

The Eagles jumped out of the gates early as FGCU scored two first-inning runs on a two-run home run from Jake Noll, but the Bucs responded with two runs in the home half of the inning to pull even at two. Jeremy Taylor led off the inning with a leadoff infield single for his 200th career hit and Trey York followed with a ground-rule double to left. From there, Kevin Phillips and Hagen Owenby came through with sac-fly RBIs to tie the game.

FGCU continued swinging the hot bat an inning later, as the Eagles picked up RBI singles from Matt Reardon and Tyler Selesky, while Noll drove in his third run of the night with a sac-fly RBI to right, putting the Eagles back ahead for good, 5-2.

ETSU was able to pull within a run following a two-run third inning, but the Eagles took the wind out of the Buccaneer sails by plating two runs of their own in the top of the fourth, making it a 7-4 contest. The Bucs did their damage with two outs in the third inning as Christian Bailey sent an 0-2 pitch to left field for an RBI single – and after working a four-pitch walk earlier – Blake Rowlett (Clarksville, Tenn.) scored on Lance Mays’ two-out RBI single up the middle.

The Eagles took advantage of a leadoff error by shortstop Robby McCabe (New Port Richey, Fla.) in the top of the fourth as FGCU scratched across two unearned runs to take a three-run advantage. McCabe’s throw on a chopper by Gage Morey pulled Kevin Phillips off the bag and he later came in to touch the dish on Matt Reardon’s RBI double. Reardon eventually scored on Noll’s second sac-fly of the night to cap off the scoring.

The Bucs left runners stranded in four of the last five innings, but ETSU couldn’t reward the solid effort from its bullpen with the timely hit.

ETSU looks to even the series on Saturday as senior right-hander Lee Haeberle (Hendersonville, Tenn.) get the ball for the Bucs, while the Eagles counter with junior right-hander Garrett Anderson.

Due to the threat of inclement weather for the remainder of the weekend, the schedule has been altered. Saturday’s game will now start at 1 p.m., while Sunday’s finale gets underway at noon.