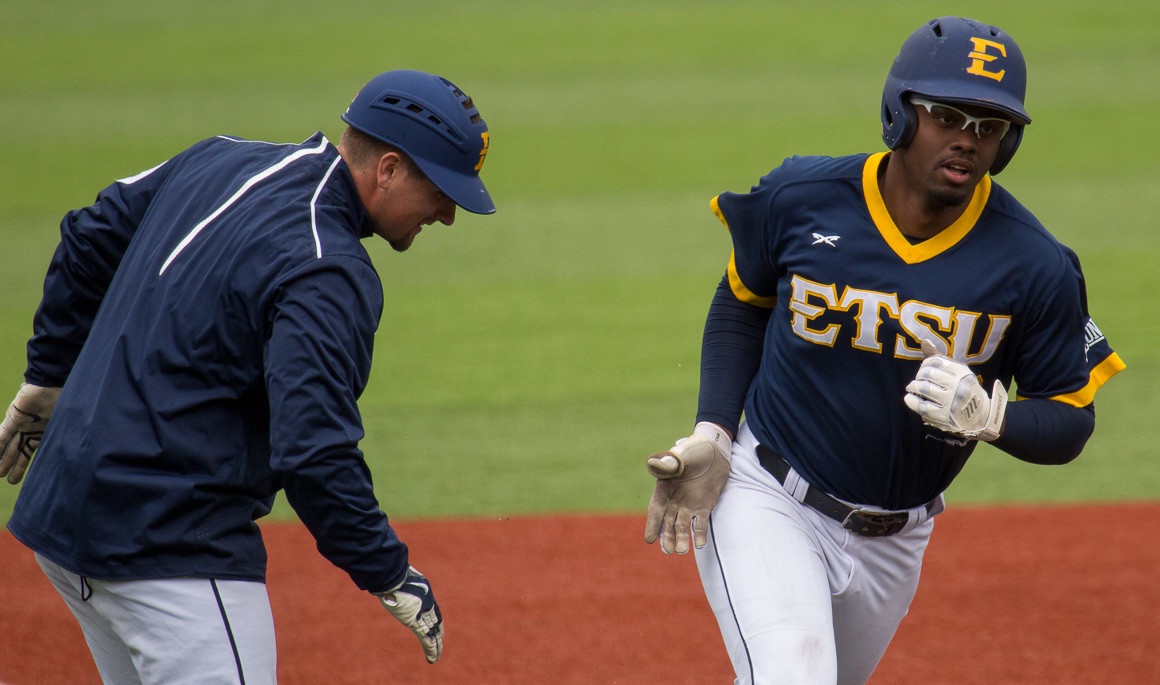 Senior first baseman Kevin Phillips goes 2-3 with a double and the two-run go-ahead homer in the seventh to give ETSU the 6-4 win over FGCU.
Seniors lead Bucs to 6-4 victory over FGCU
FGCU at ETSU | March 19, 2016
Related Links

Phillips went 2-3 with a double and the go-ahead two-run home run in the seventh for the Bucs. He ended the day with four RBIs and touching home once. York started the three-run third for ETSU as he cranked a two-run homer to left field. He finished game two of the series going 1-2 with two RBIs, a pair of walks, and two runs scored. Jeremy Taylor (Fayetteville, Ga.) was the third senior for ETSU who had a multi-hit game as he tallied two singles.

Haeberle offered another solid outing for the Blue and Gold on Saturday. He surrendered all four runs, but he earned the win as the Bucs rallied for two runs in his last inning of work. He struck out nine Eagles and walked just one in the outing. Ryan Simpler (Lewes, Del.) came out of the bullpen for the second time this season and made quick work of FGCU as he only used 13 pitches in the eighth. Peyton Taylor (Kingsport, Tenn.) picked up his second save of the year as he closed out the ninth inning.

ETSU moves to 9-9 on the year, while FGCU falls to 9-11. Haeberle earned his second win of the season, and Sterling Koerner was pinned with his third loss of the year.

FGCU struck early as Tyler Selesky smoked a solo home run over the right field wall. After the homer, Haeberle forced the next two batters to ground out to end the top half of the inning.

Aaron Maher (Brentwood, Tenn.) led off the inning with a double that flew over the right fielder’s head. This was his ninth two-bagger of the season, which is the most for ETSU. Phillips traded places with Maher as he connected with a double down the left field line to knot the game at 1-1. Phillips was left stranded at second after Garrett Anderson sat down the next three Buccaneers he faced.

The Eagles regained the lead by placing three runs in the top half of the inning. They tallied five hits with two being infield base hits. However, Haeberle minimized the damage as he left two runners stranded.

The Blue and Gold retaliated in the bottom half of the inning as Blake Rowlett (Clarksville, Tenn.) knocked a one out single to left, and York followed by crushing the first pitch he saw over the left-center field wall. ETSU tacked on a pair of singles after the homer by Hagen Owenby (Knoxville, Tenn.) and Maher. Phillips put the ball in play and scored Owenby from third to tie the game at four each.

Florida Gulf Coast University tried to rally in the top half of the inning. They put together back-to-back singles with one out, but Haeberle pitched out of trouble by forcing the next batter fly out to center and the third out to ground into a fielder’s choice.

The Bucs gained their first lead of the game in the seventh off one swing of the bat. York led off the inning with a six-pitch walk. The next two batters lined out and struck out, but York swiped second for his fourth stolen base of the year. Phillips came up with two outs and smoked a home run that landed on the hill over the left field wall to push the game to 6-4 in favor of ETSU.

The ETSU pitching staff was nearly perfect in the second half of the game as the allowed only three hits in the last five innings with innings five and six going three up and three down. Simpler tossed the eighth inning and faced four batters and allowed one hit. Peyton Taylor closed the game with two fly outs and a groundout.

The series finale against FGCU will be held tomorrow at Thomas Stadium for a noon first pitch. Dillon Cate (Sevierville, Tenn.) has been given the starting nod from head coach Tony Skole and will pitch his first college start on Sunday.