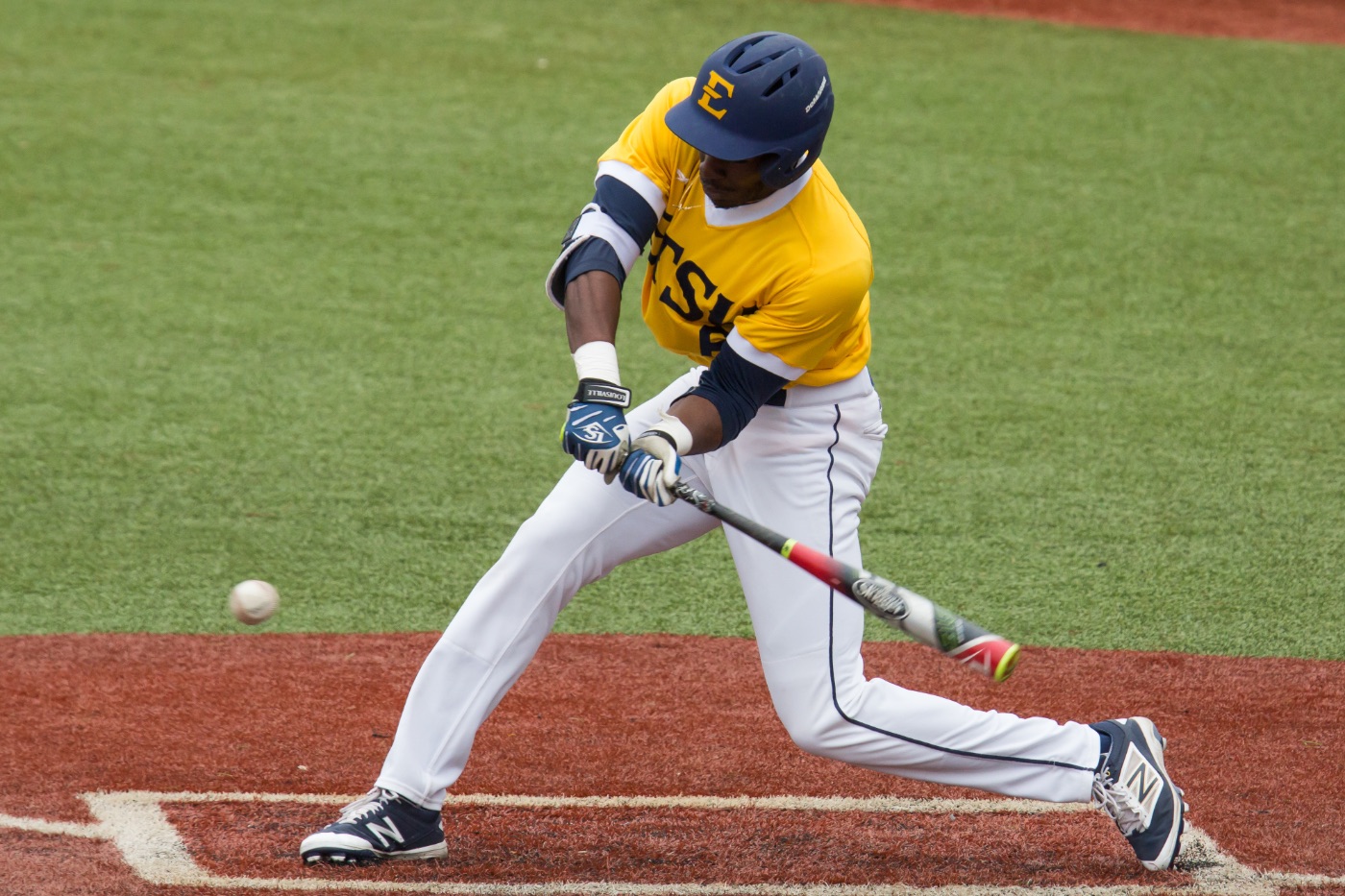 Three ETSU players had three hit games today for the Bucs. Taylor went 3-6 with three singles, a RBI, and run scored. He swiped two bases to bring his season total to two. Longley had a productive day at the plate as he spanked three doubles that found the left-center field gap or down the right field line. Longley tallied one RBI and walk while touching home three times. McCabe roped his third home run of the season in the fifth inning and tallied three RBIs in his three-hit performance.

Every FGCU pitcher had at least one run scored against them on Sunday’s outing. The Bucs offense never struck out and walked eight times, which was led by Trey York’s (Knoxville, Tenn.) three in the game.

The Bucs rallied in the eighth inning being down four. The Blue and Golf scored three runs in the bottom half, but ETSU left the bases loaded to leave the game at 11-10. The Bucs had a chance to tie the game in the last inning, but he was gunned down at home by the third baseman.

FGCU worked early as Matt Reardon led the game off with a single to center, but he was eventually caught stealing by an excellent throw from Hagen Owenby (Knoxville, Tenn.). The Eagles were able to walk back-to-back batters but left them stranded.

The Bucs scored the first two runs of the game in the first inning. York led off the inning with the walk. He moved to second on a wild pitch, and Owenby tattooed a double to left field to plate York. Kevin Phillips (St. Louis, Mo.) cranked a double, which scored Owenby from second to move the lead to 2-0.

ETSU used fundamental baseball in the bottom half of the inning to score a run and advance the lead to 3-0. Longley led off the inning with a ground-rule double to center. Lance Mays (Ridgely, Tenn.) hit a sacrifice bunt to move Longley to third, and McCabe put down a second bunt to score Longley.

The Eagles struck for six unanswered runs in the pair of innings to take the lead from ETSU. FGCU plated one run in the third off a sacrifice fly by Tyler Selesky.

The fourth inning had the visitors plate five runs to gain the lead. Nick Blasucci started the rally with a single. He scored off a teammate’s double to pull the game within one run. After a pitching change for ETSU, FGCU scored four straight runs off a wild pitch, sacrifice fly, and two hits. The Eagles ended the inning leading 6-3.

McCabe cut into the FGCU lead as he led off the inning with his third home run of the season that flew over the left field wall. Taylor followed with a single, but the Eagles turned a double play and struck out a Buc to end the inning

Phillips started the sixth run rally by reaching base on a throwing error. Blake Rowlett (Clarksville, Tenn.) hit into a fielder’s choice to keep a runner at first. Longley connected with his second double of the afternoon and plated Rowlett. Mays followed by smoking a triple that hit off the center field wall that tied the game at 6-6.

McCabe hit a seeing-eye single up the middle with the infield in to get the Bucs back out in front 7-6. The Blue and Gold had a chance to add insurance in the sixth, but Clint Knoblauch came in relief and forced a double play with the bases loaded.

In the third lead change of the afternoon, the Eagles struck for three more runs to get the lead to 9-7. All runs the runs that scored in the inning were unearned due to a throwing error by ETSU.

FGCU added two more insurance runs in the top half. Colton Bottomley spanked a two RBI double that split the right-center field gap. The Eagles ended their half inning with an 11-7 lead.

ETSU did not surrender as they pulled the game within one at the end of the inning. Longley led off the inning with a six-pitch walk followed by a Mays’ single that went through the right side. McCabe hit a ball to short but beat the throw to first to make the bases loaded with no outs.

Taylor connected with a dribbler to second, and the Eagles tried to turn a double play. However, Taylor hustled down the line to have runners at the corners with one down. Taylor stole second to put two runners in scoring position, and York answered with his third walk of the game to put ducks on the pond. Aaron Maher (Brentwood, Tenn.) forced a four-pitch walk, and Phillips worked a full-count walk to plate two more runs. The Bucs ended the inning with a force out and left three runners stranded.

Blasucci singled up the middle for his third hit of the afternoon. The Eagles moved him over to second on a sacrifice bunt, but Peyton Taylor (Kingsport, Tenn.) forced the next two batters he saw to fly out.

Longley led off the inning for a second time Sunday with a double that found the left-center field gap. Seth Cunningham (Bristol, Va.) pinch ran for Longley at second, and Mays hit his second sacrifice bunt of the day to put the tying run 90 feet away from scoring.

With the infield in and one out, McCabe hit a ball to third, but Cunningham committed to run home and was gunned down at the plate. Jeremy Taylor ended the game with a fly out to left to end the threat.

The Buccaneers will hit the road for their third road game of the season. They will travel to Rock Hill, S.C. to square off against Winthrop who is 11-9 on the season. The game is scheduled for March 22 at 6 p.m. The game on Tuesday will be a breast cancer awareness game.

The Eagles are coming off a three-game series with Stetson in which they lost two games against the Hatters.