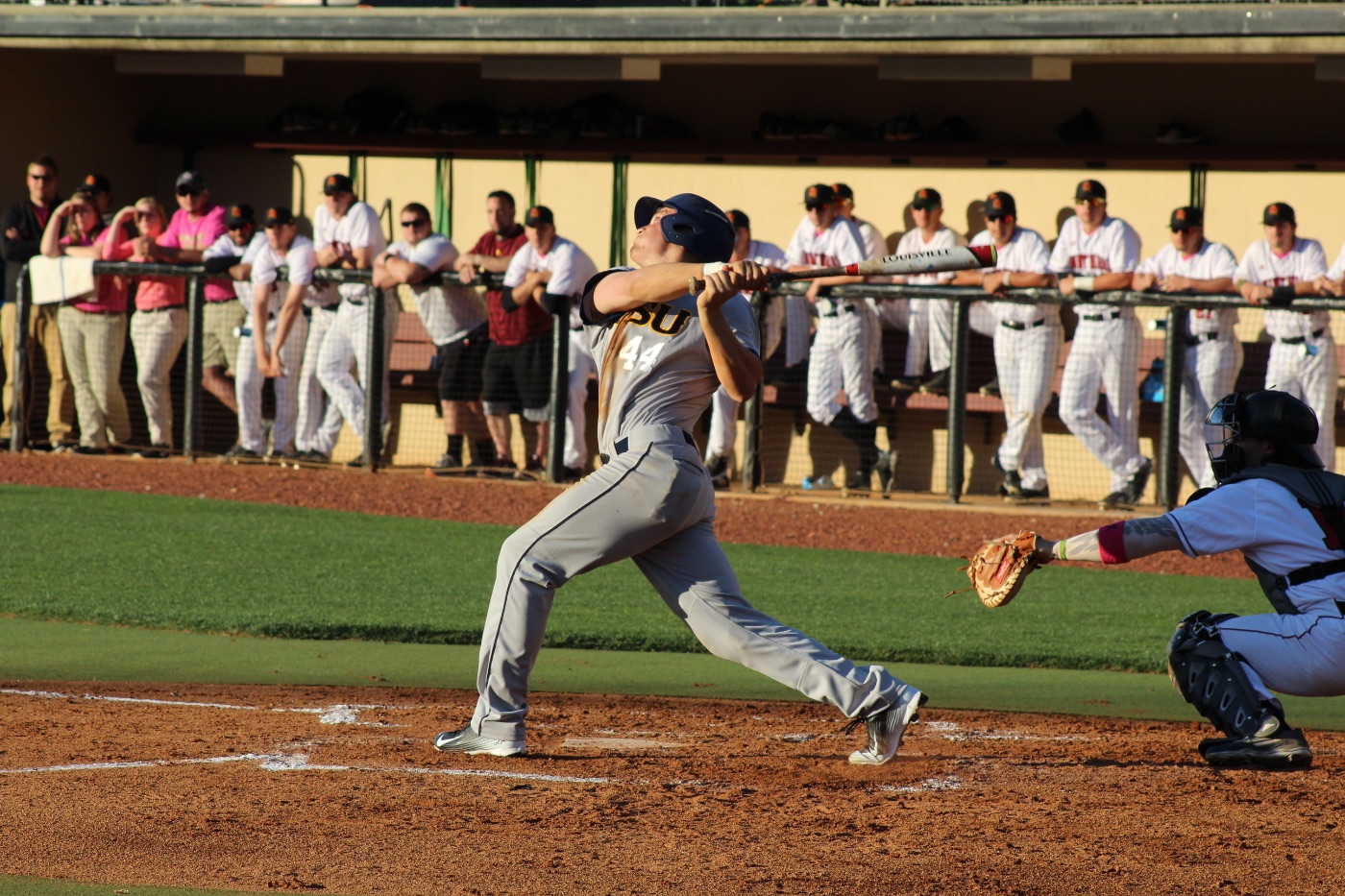 Owenby went 2-4 with three RBIs and one run scored. He has brought up his season total of RBIs to 22, which leads the team. Jeremy Taylor (Fayetteville, Ga.) reached base three times and scored the first run of the game in the first inning off an Owenby single to left. Trey York (Knoxville, Tenn.) extended his on-base streak to 14 straight games. York went 2-5 with a single and RBI triple. This is York’s first triple of the season leaving him one shy of tying Shane Byrne’s career record of 14, which is the third-most in ETSU history.

Robby McCabe (New Port Richey, Fla.) touched home twice for the Blue and Gold and tallied a broken bat single to shallow left field. Kevin Phillips (St. Louis, Mo.) extended the ETSU lead in the fifth with a RBI single up the middle.

McCann started his first game of the season for the Bucs and went five strong innings. He surrendered just three hits with five strikeouts and no walks. Zach Thompson (Ooletewah, Tenn.) and Andy Higley (Knoxville, Tenn.) each came out of the bullpen and offered solid outings as neither gave up an earned run. Griffin Krieg (Nashville, Tenn.) faced one batter in the eighth and struck him out to end the inning. Peyton Taylor (Kingsport, Tenn.) trotted to the mound in the ninth and was perfect as he picked up his third save of the season.

Jeremy Taylor was hit by a pitch to lead off the game and moved to second after a failed pickoff move to first. York moved Taylor to third on a groundout, and Owenby sprayed a hit to left to score the first run of the game.

The Bucs added a pair of runs in the inning to move the lead to 3-0. Jeremy Taylor walked to lead off the inning and advanced to second on a wild pitch. York followed with a single to left and stole a base of his own to put two runners in scoring position. Owenby hit a sacrifice fly to right and extended the lead to 2-0. York stole third after a big jump from second, and he scored on the next batter off a wild pitch that flew towards the third base dugout.

Innings One Through Three

McCann was nearly perfect as he went three up and three down in two of the three innings. He surrendered one hit in a two out situation in the second. Fortunately, the base knock didn’t hurt him as the runner was left stranded on first.

Roger Gonzalez cracked a two out double to right center to give the Eagles their first extra base hit of the game. McCann struck out the next batter swinging, but the batter reached base on a passed ball, which put runners on the corners. Mark Lowrie took advantage of the mistake and scored the first Winthrop run of the game. McCann forced a pop up to second to end the inning and hold the lead at 3-1.

McCabe started the three-run inning for the Buccaneers with a single that blooped into left field. Jeremy Taylor advanced McCabe to second on a sacrifice bunt to put McCabe in scoring position. York crushed his first triple of the season off the center field wall, and Owenby followed with a high chopper that got past the Winthrop third baseman to score York and move the lead to 5-1. Owenby moved to second on the next batter and scored on a screaming single by Phillips.

McCann finished the inning going three up and three down with a strikeout, fly out, and a ground out to hold the lead at 6-1.

With two outs, McCabe drew a walk and was scored off a Jeremy Taylor double to left field to add insurance for the Bucs.

The Eagles regained the run surrendered in the inning with a run of their own. Gonzalez roped a single with two runners on and no outs to plate the second run of the afternoon for Winthrop. Thompson minimized the damage striking out the next batter and forcing a ground out at second base. Higley came out of the pen to get the last batter with an unassisted groundout at first. The Bucs finished the sixth with a 7-2 lead.

Winthrop plated three runs in the bottom half of the inning to bring the game within two. All of the runs that scored in the inning were unearned due to three errors in the inning. Gonzalez reached on a fielder’s choice and plated Mitch Spires off a throwing error. The next batter connected with a sacrifice fly to center to make the game 7-4. After a fly out to center, Jace Whitley doubled to right and scored the fifth run of the game for Winthrop.

Krieg came out of the pen and answered with a clutch strikeout to end the rally for the Eagles.

Peyton Taylor was the fifth pitcher for the Blue and Gold to come out of the bullpen and faced four batters. He forced the first two batters to ground out and fly out, but he hit Spires to put a runner on and the tying run at the plate. However, Peyton Taylor forced the last batter to fly out to end the game and pick up his third save of the year.

ETSU begins their SoCon schedule with a trip to Cullowhee, N.C. to face Western Carolina in a three game set starting on March 24 at 5 p.m. The final two games of the series will begin on March 25 at 5 p.m. and March 26 at 2 p.m. at WCU.