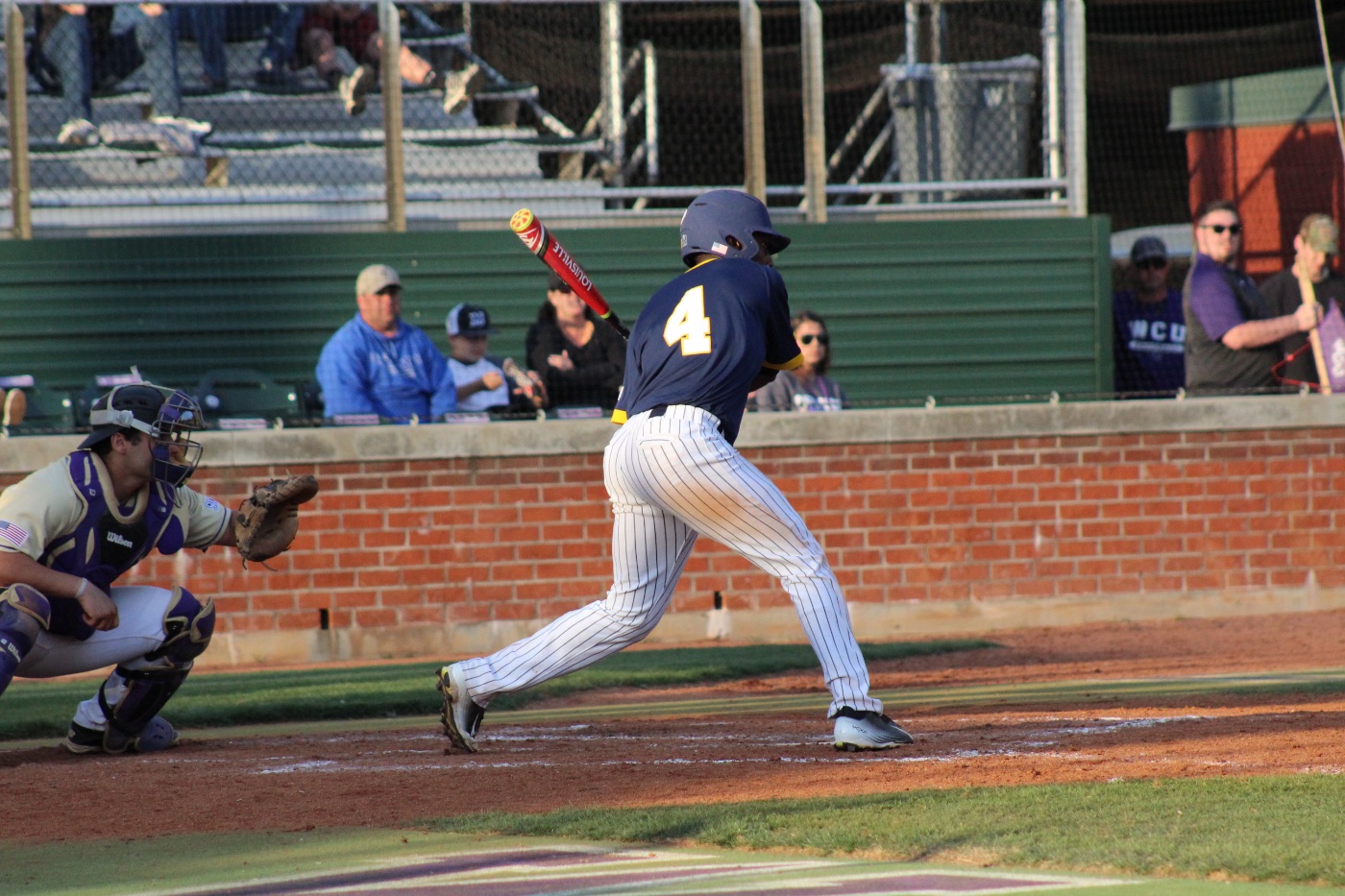 Cullowhee, N.C. (March 25, 2016) – Following a suspended game one of the series, the Bucs added on four runs en route to their first conference win over Western Carolina 14-8, but the Bucs let game two get away as a two run eighth for the Catamounts handed ETSU their first loss in conference play.

Finale of Game One

ETSU started the game in the field and two Catamount runners on with no outs. Ryan Simpler (Lewes, Del.), who was pitching when game one was suspended Thursday, came back out to finish the game. He attempted to pickoff the runner at third and failed. After another try at first base, Simpler snapped a third attempt to first to get the runner napping to get one out at the restart of the game.

Following the pickoff, Simpler forced a ground out to third, but with two outs, the Bucs let up a passed ball to score the runner on third to make the game 10-6.

In the eighth inning, the Buccaneers struck for four runs highlighted by Lance Mays (Ridgely, Tenn.) and Hagen Owenby (Knoxville, Tenn.) bases loaded walks, a run scoring balk by the WCU pitcher, and a fielder’s choice.

The Catamounts attempted to regain momentum as they hit back-to-back home runs to pull with six at the end of the inning but couldn’t scratch more runs in the inning.

Simpler worked a perfect ninth to end the game at 14-8 in favor of ETSU. Blake Smith (Ninety Six, S.C.) earned the win, and Simpler picked up his first save of the season.

Trey York (Knoxville, Tenn.) smacked a two run home run in the first inning and finished the game going 2-5 with three RBIs. He also touched home twice for the Blue and Gold. Owenby offered a strong outing going 2-4 with a two run home run of his own that flew over the left field fence. He tallied a run scored with a walk in the second game on Friday.

Mays provided offensive support with a bases loaded triple in the fifth that gave ETSU the 11-7 lead. He ended the day going 2-4 with five RBIs and a run scored. Caleb Longley (Cleveland, Tenn.) and Robby McCabe (New Port Richey, Fla.) each tacked on a hit with each walking once and touching home twice. Jeremy Taylor (Fayetteville, Ga.) had another multi-hit game with a pair of singles and a RBI.

Five Buccaneers players had two hits in the game, and six of the 13 hits for ETSU were extra-base hits including two home runs.

Griffin Krieg (Nashville, Tenn.) came out of the pen and was lights out in the first three innings of relief. His final line was 3.1 innings with two hits and one earned run. He struck out three while walking a pair. Peyton Taylor (Kingsport, Tenn.) finished the game going 0.2 innings with no hits or runs allowed.

The Blue and Gold got on the board first as two run home run. Jeremy Taylor singled to left center to lead off the offense for the Bucs, and York smoked a two-run home run that curled around the left field foul pole.

The Catamounts matched the Buccaneers with a pair of runs in the bottom half of the inning. Nobu Suzuki reached on a fielding error by ETSU. WCU connected with a single followed by a double to score Suzuki and Bryson Bowman.

Longley and Blake Rowlett (Clarksville, Tenn.) led off the frame with back-to-back walks. After a fielder’s choice that put runners at the corners, Taylor snuck a bunt, which he hustled out for a single to plate Longley from third. The Bucs regained the lead at 3-2.

Western Carolina University put a three spot in retaliation to take their first lead of the afternoon. Caleb Robinson started the scoring for WCU with a solo homer in the inning, and his teammate, Suzuki, tattooed a two-run home run for the Bucs to advance the score to 5-3.

Rowlett started the offense for ETSU with his first hit of the night. McCabe spanked a double to center to put two runners in scoring position. Mays tied the game at five each off his two RBI double. York earned his third RBI of the game with his single through the left side. After drawing a balk from the Catamount pitcher, Owenby cranked his eighth home run of the season that flew over the left field fence to move the game to 8-5.

The Catamounts didn’t go down without a fight as they placed a pair of runs in the bottom half of the inning. Robinson smacked another homer for WCU on the third pitch he saw in the at-bat. Garrett Brown followed with a single and advanced to third on a throwing error. Suzuki hit a deep grounder to short to score Robinson from third to cut the ETSU lead to one run.

Aaron Maher (Brentwood, Tenn.) got on base with a double to left center. Longley singled through the left side for his first hit of the game. Longley then stole second for his first collegiate stolen base to put two runners in scoring position. McCabe walked to follow Longley to put runners on all bases. With one out and bases load, Mays burned the WCU right fielder to score three runs, but Mays was gunned down at home trying to stretch his triple into an inside the ballpark grad slam. The Bucs led 11-7 in the middle of the inning.

However, WCU matched ETSU in the bottom half to pull back within a run. Kramer Ferrell connected with a three-run home run to account for the trio of runs for the Catamounts in the inning.

Both ETSU and WCU were held scoreless over the three inning stretch.

Krieg came in relief and sat down the three of the first four batters he faced by means of a fly out, ground out, and a strike out in the middle of the fifth inning. He was nearly perfect in the sixth as he surrendered a one out single to Bowman but gathered his composure with a fly out and Owenby gunning the runner trying to steal second.

In the seventh, Krieg worked a perfect inning with two strikeouts to start and end the inning for the Bucs.

The Catamounts earned the tying and go-ahead runs in the eighth to get back ahead of the Buccaneers. Brown hit a double down the left field line that scored Robinson from third to tie the game at 11. Peyton Taylor came on in relief for the Bucs and forced two groundballs, but a ball got away from ETSU shortstop McCabe that scored the unearned, go-ahead run for WCU.

Kevin Phillips (St. Louis, Mo.) tried to get a rally started for the Blue and Gold with a one out walk, but the next two batters flied and grounded out to end the game at 12-11.

The final game of the SoCon series opener for ETSU and WCU will start at 2 p.m. on March 26 at Hennon Stadium in Cullowhee, N.C.

ETSU will return home to play an out of conference game against Radford on March 29 in Thomas Stadium at 6 p.m.