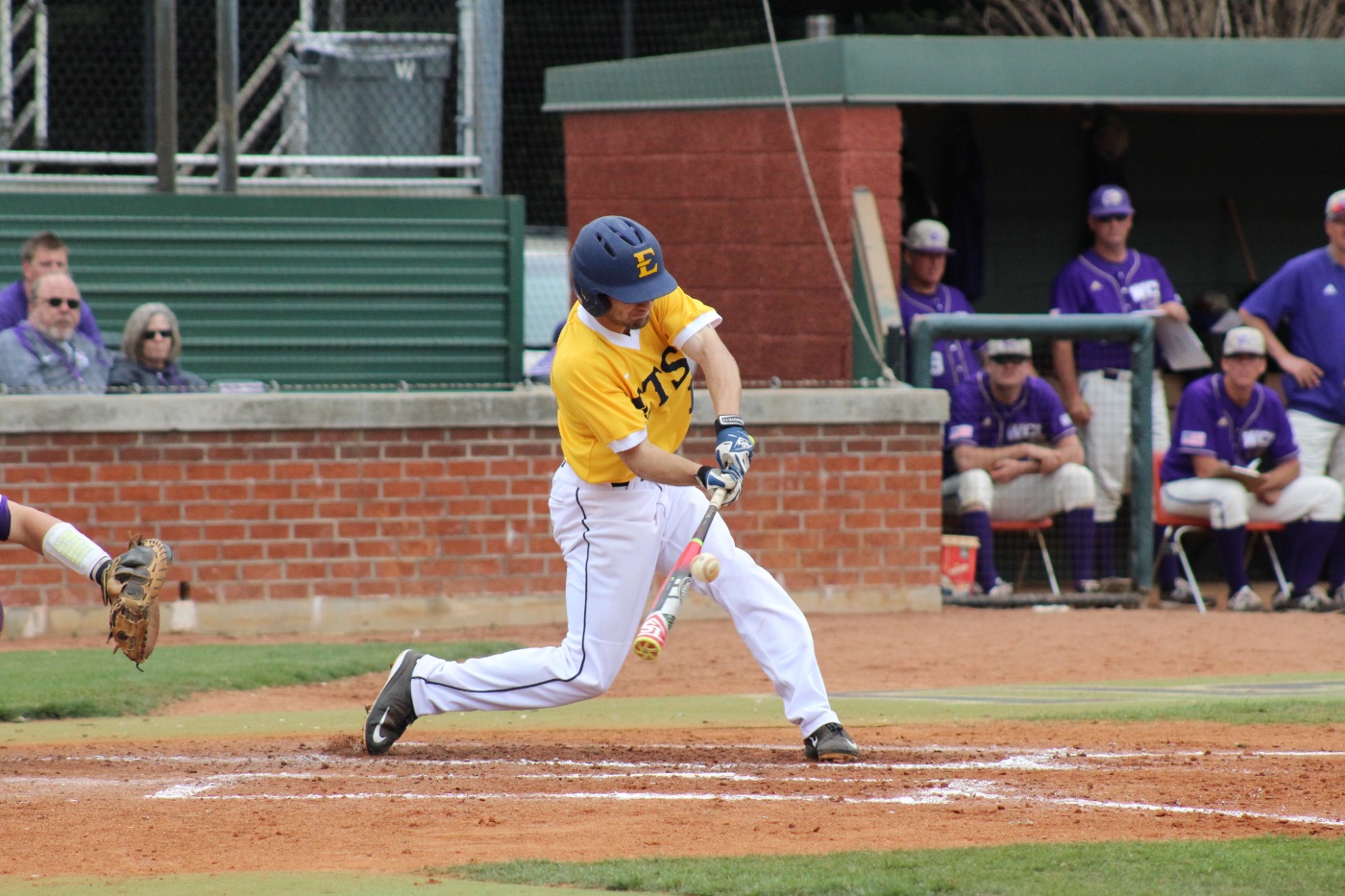 Cullowhee, N.C. (March 26, 2016) – Five ETSU players had multi-hit games, but the Bucs were bested by Western Carolina 15-9 in Cullowhee as the Catamounts connected with 18 hits with two home runs and a double on Saturday afternoon at Hennon Stadium.

Logan Gentry (Kingsport, Tenn.) and Victor Gonzalez (Mount Pleasant, S.C.) were the most effective relievers Saturday for the Bucs. Gonzalez lasted the longest for ETSU as he tallied two innings without a run to score. Gentry tossed an inning of work without a hit or run to occur.

York has gone back-to-back games with home runs in the first inning. He tattooed a one out home run over the left field fence, and it was his seventh of the season.

Just like yesterday, WCU came back as they scored three in the inning. The Catamounts had two walks and a single to make the bases loaded, and Matt Smith connected with a hit up the middle to score two. With runners at the corners, Kramer Ferrell hit a single to left center to tack on their third run of the inning. The Bucs ended inning with a ground out to second base.

Even though they are down a pair, the Bucs fought back with five runs in the top half. Rowlett led off the inning with a double to left center. Kevin Phillips (St. Louis, Mo.) smoked a line drive to third that got past the WCU defender and scored Rowlett from second. Mays followed with a single through the right side to put runners on the corners. Clift smacked his first extra base hit of the season to center that scored Phillips and put two runners in scoring position for ETSU. McCabe joined in on the action with a double for the Bucs to score two runs to make the score 5-3. York hit a sacrifice fly to center to plate the fifth run of the inning to pull the Blue and Gold ahead 6-3.

Western Carolina matched the Buccaneers with a five spot of their own. The inning was highlighted by a Matt Smith grand slam that flew over the right center field fence. The fifth run came off back-to-back hits by Ferrell and Danny Bermudez.

After regaining their second lead of the afternoon, Andrew Bullock hit a solo home run to lead off the inning for the Catamounts and make the lead 9-4.

The Bucs surrendered another big inning as WCU scored five runs in the bottom of the fourth. The Catamounts had four hits and one error to add insurance for Western Carolina and advance the lead to 14-6.

Maher started a small rally for the Blue and Gold as he hit a towering solo home run just right of center field. The Bucs added to the momentum with a Rowlett single and later scored on a throwing error by the WCU shortstop.

After three pitching changes, Gonzalez held the Catamounts scoreless for the first time in the game.

Gonzalez came back in for his second inning of relief and worked quickly with just six pitches as he forced two groundouts and a pop out.

ETSU was able to work the bases loaded in the inning after a walk, single, and a hit by pitch. McCabe hit a ball to deep short to score Phillips, but even with a nice diving play, all players were safe with an attempt to throw out Mays at third base. With one out, the next batter for ETSU grounded into an inning-ending double play. The Bucs pulled within five as the Bucs headed into the bottom of the inning.

Josh Jacques (Rollinsford, N.H.) came on to pitch and got the first out of the inning. Peyton Taylor (Kingsport, Tenn.) came out of the pen for the second straight day and forced a fly out and a ground out to leave one stranded to make it three straight innings without the Catamounts scoring a run.

York started the inning with a five-pitch walk, but his teammates followed with a pair of strikeouts and a fly out to end the threat.

WCU padded their lead with a RBI single by Bullock through the right side to make the game 15-9.

The Bucs went down in order as they fell to the Catamounts 15-9 in the rubber series for the first SoCon series of 2016 for ETSU.

Jamin McCann (Kingsport, Tenn.) was pinned with his first loss of the season, and the Bucs fall to 11-12 overall and 1-2 in conference play.

ETSU will return home to play an out of conference game against Radford on March 29 in Thomas Stadium at 6 p.m. The second SoCon series for the Bucs will be at Thomas Stadium against Furman starting on April 1, and first pitch for the opening series against the Paladins will begin at 6 p.m.