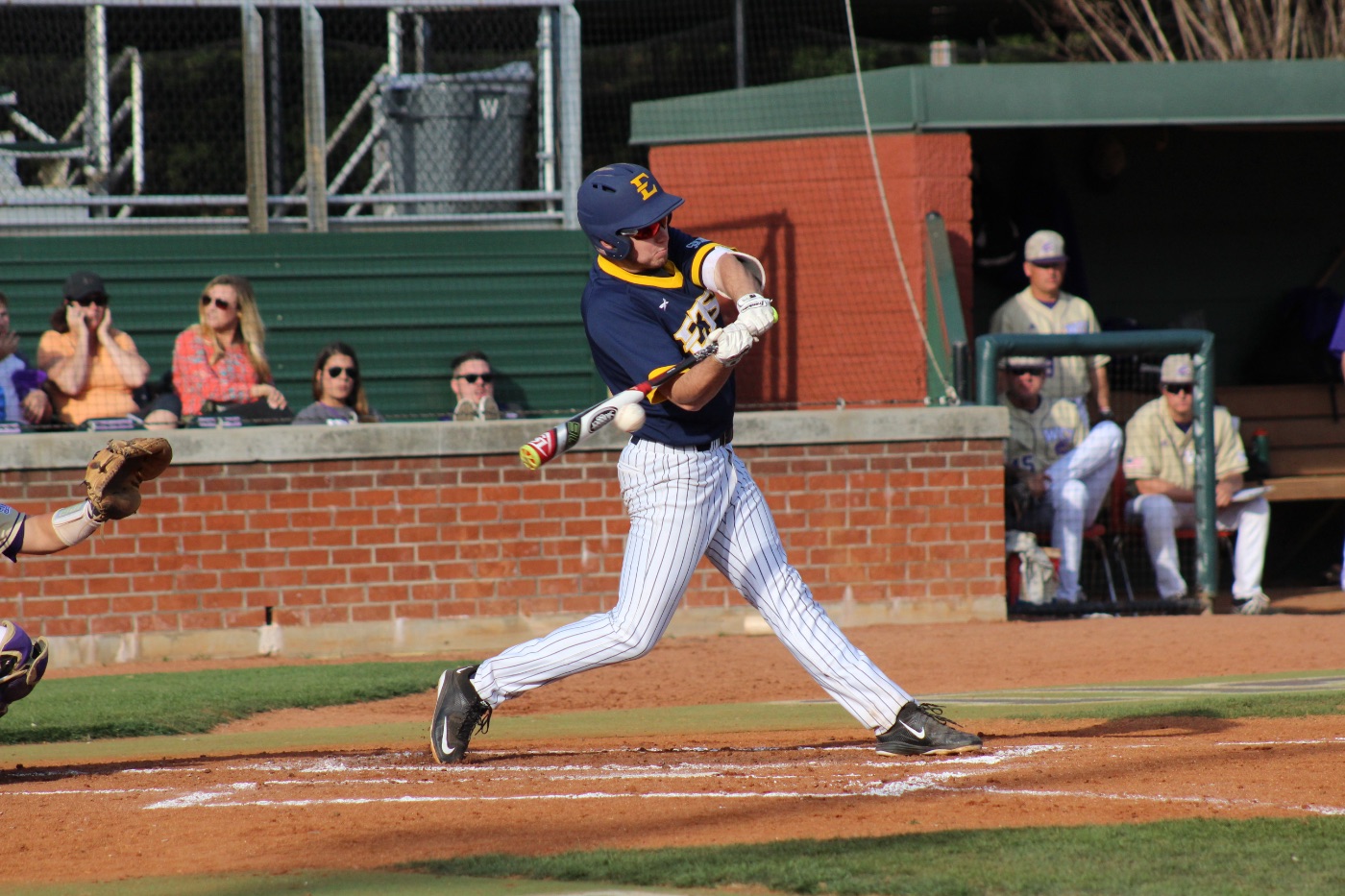 JOHNSON CITY, Tenn. (March 28, 2016) – After splitting the previous four games on the road, ETSU returns home to host Radford on Tuesday at 6 p.m. for a midweek clash against the Highlanders.

Trey York (Knoxville, Tenn.) went on a tear this weekend as he batted .538 in all three games. He smacked two home runs in the last two games of the series both coming in the first inning. He tallied five RBIs and seven hits, which led the team. Lance Mays (Ridgely, Tenn.) had a great weekend as he went 5-13 with a double, triple, and his first homer of the season. He led the team this weekend with eight RBIs with three of them coming off his bases-clearing triple on Saturday. Hagen Owenby (Knoxville, Tenn.) started all three games with two behind the dish and one as a designated hitter. He tallied five hits with three coming as extra base knocks.

After suspending the first game on Thursday, the Bucs and Catamounts returned to action on Friday. The Bucs won the first game of SoCon play 14-8 while falling in the last two games 12-11 and 15-9. WCU struck for nine home runs with six doubles in the weekend series. The two teams matched this past weekend as both teams struck for 40 hits, but WCU found the edge as they plated one more run than the Blue and Gold.

Junior infielder Danny Hrbeck has been one of the most consistent players for the Highlanders. He has seven extra base hits with four doubles. He is one of the leaders on the team in batting average with .365 and slugging percentage with .494. He also leads the team with a .419 on-base percentage amongst starters. He has started in 23 games with 85 at-bats for the Highlanders. Another offensive threat for Radford is junior college transfer catcher Jonathan Gonzalez. Gonzalez has played in 17 games and started in 14. He totes a .315 batting average with 17 hits and eight runs. He is second on the team in RBIs with 10. Trevor Riggs is a powerhouse for the Highlanders as he leads the team with nine extra base hits and in slugging percentage (.514).

From a pitching standpoint, Radford has struggled in the 24 games this season. They are 6-18 on the season with three wins coming from one starter, Mitchell MacKeith. The Bucs won’t face MacKeith in the midweek clash. The Blue and Gold will see LHP Tyler Swarmer inside Thomas Stadium on Tuesday. He has started in four games and has a 1-2 record on the season. He has tossed 23.2 innings with 12 strikeouts and four walks. He has allowed just one extra base hit all season and has a .309 batting average against.

ETSU will probably see several pitchers out of the bullpen, which might include: Travis McQueen, Kyle Zurak, and Ryan Sande. All three pitchers have come out of the pen at least six times and have tossed over nine innings this season.

ETSU will continue their SoCon baseball schedule by hosting Furman starting on April 1. First pitch for game one will be at 6 p.m. The next two games will begin at 2 p.m. on Saturday and 1 p.m. on Sunday in Johnson City.