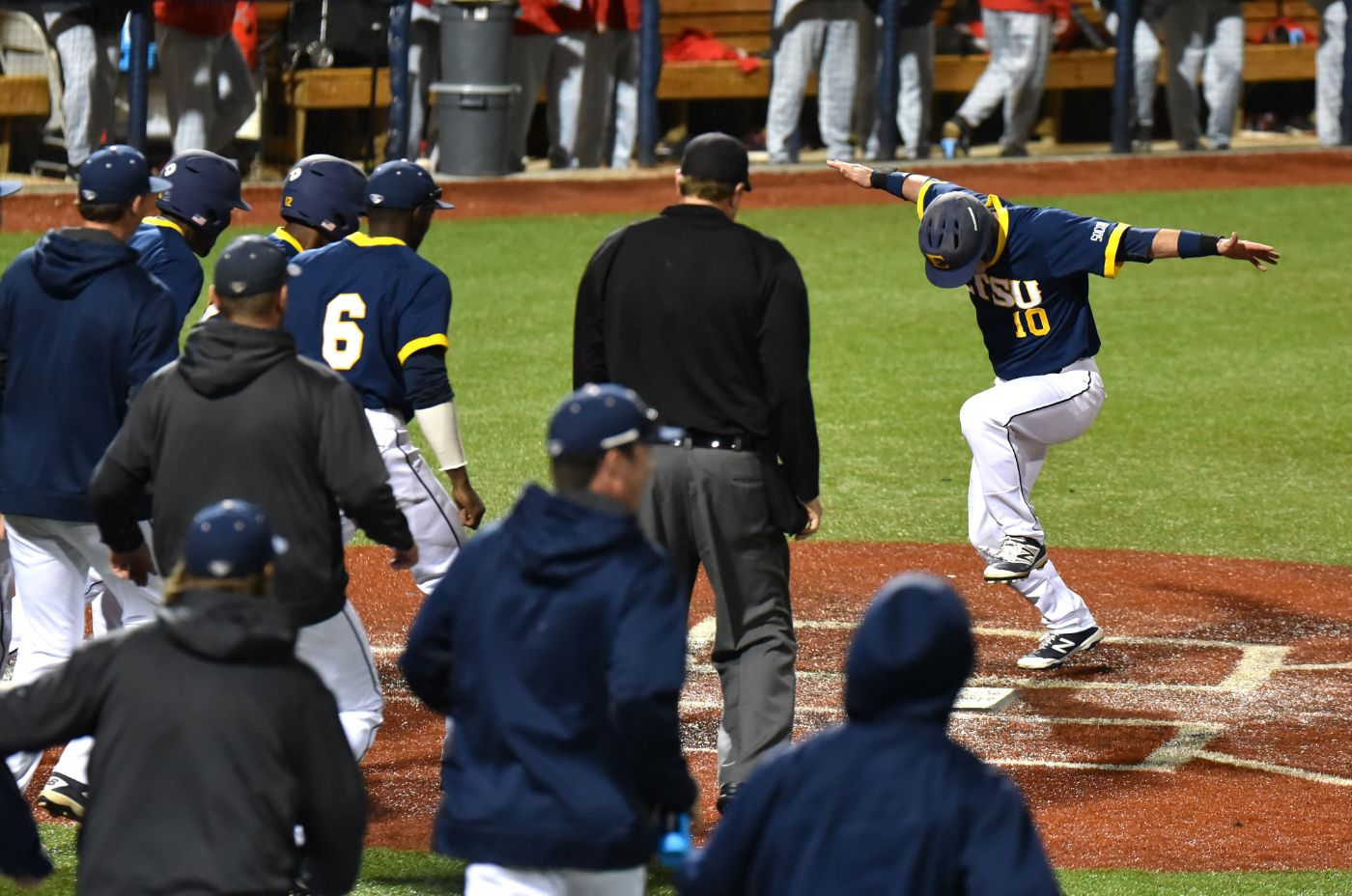 Trey York stomps on home plate as he scores the walkoff run in the 6-5 win over Radford.
Crazy finish leads ETSU to 6-5 walk off win
Radford at ETSU | March 29, 2016
Related Links

JOHNSON CITY, Tenn. (March 29, 2016) – After being down three runs going into the eighth, ETSU fought back against Radford with three runs in the eighth and one in the ninth to score the walk off run thanks to two throwing errors to win 6-5 at Thomas Stadium on Tuesday night.

Kevin Phillips (St. Louis, Mo.) had a bounce back day after being held hitless in Cullowhee as he went 2-2 with a solo home run in the fourth and a single on Tuesday. He touched home twice and also drew a pair of walks. Trey York (Knoxville, Tenn.) extended his on-base streak to 18 straight games as he roped a single to center in the ninth and scored the game-winning run after two errand throws by Radford. Aaron Maher (Brentwood, Tenn.) continued his hot streak as he went 2-5 with a pair of singles and a RBI. Blake Rowlett (Clarksville, Tenn.) came up in a pinch-hit appearance late in the game and spanked a two RBI single to center to start the three-run eighth inning for the Bucs.

The Highlanders struck early as Shane Johnsonbaugh hit a little dribbler to third base and was called safe on a tough play. He stole second on the next play and touched home two plays later off a Trevor Riggs RBI single through the left side. Radford tallied for another single, but Gonzalez forced a line out to left to strand two.

ETSU fought back with a two out rally to tie the game at one a piece. Hagen Owenby (Knoxville, Tenn.) hustled out a double down the right field line and was plated two pitches later off a Maher single through the right side.

Zach Duff got the ball rolling for the Highlanders with a hard hit to center. Jordan Taylor worked a full count and advanced to second on the throw to put two runners in scoring position. Colby Higgerson laid down a sacrifice bunt that scored Duff from third to regain the lead at 2-1.

As they did in the first inning, ETSU came back in the inning to tie the game up. Already with a hit in the game, Phillips tattooed a solo homer to center to knot the game. It was his sixth home run of the year and made him 2-2 on the afternoon.

Radford tried to get a two out rally of their own as they put two runners on by means of a single and a hit by pitch, but Gentry struck out Duff to end the inning.

Phillips walked to lead off the inning and advanced to second on a wild pitch. Lance Mays (Ridgely, Tenn.) drew a six-pitch walk to put runners on first and second. However, the Bucs struck out looking and grounded out to end the inning.

After the sixth pitching change for ETSU, the Highlanders pounced on Dillon Cate (Sevierville, Tenn.) as he surrendered three runs on three hits to make the game 5-2.

Down three runs, the Blue and Gold had back-to-back walks to start a rally for the Bucs. The Highlanders made a pitching change and brought Travis MacQueen to the mound and hit Christian Bailey (Kingsport, Tenn.) to put ducks on the pond. Rowlett followed with a two RBI rocket to center field to pull within a run. Robby McCabe (New Port Richey, Fla.) laid down a beautiful bunt down the first base line to score the game-tying run.

Peyton Taylor came out of the bullpen for the eighth pitcher of the afternoon and his 15th appearance of the season. He forced the first batter to pop out in foul territory and the last two batters to ground out.

With the game tied at five a piece, York cranked a single to center to lead off the inning and extended his on-base streak to 18 straight games. After two fly outs, the fourth Highlander reliever, Kyle Zurak, attempted a pick off to first to try to get York napping, but he threw the ball away, which allowed York to get to third base. The first baseman for Radford threw the ball to third to try to get York, but his throw sailed and allowed York to walk home without a throw to the plate.

ETSU won the game 6-5 thanks to two errors by Radford in the bottom of the ninth. The Bucs move to 12-12 on the year while Radford falls to 6-19. Peyton Taylor picked up his third win of the year after pitching a perfect ninth inning.

The Bucs will host their first conference series at home against Furman starting on April 1. First pitch for the game Friday is set for 6 p.m. with Saturday and Sunday’s games starting at 2 p.m. and 1 p.m., respectively.