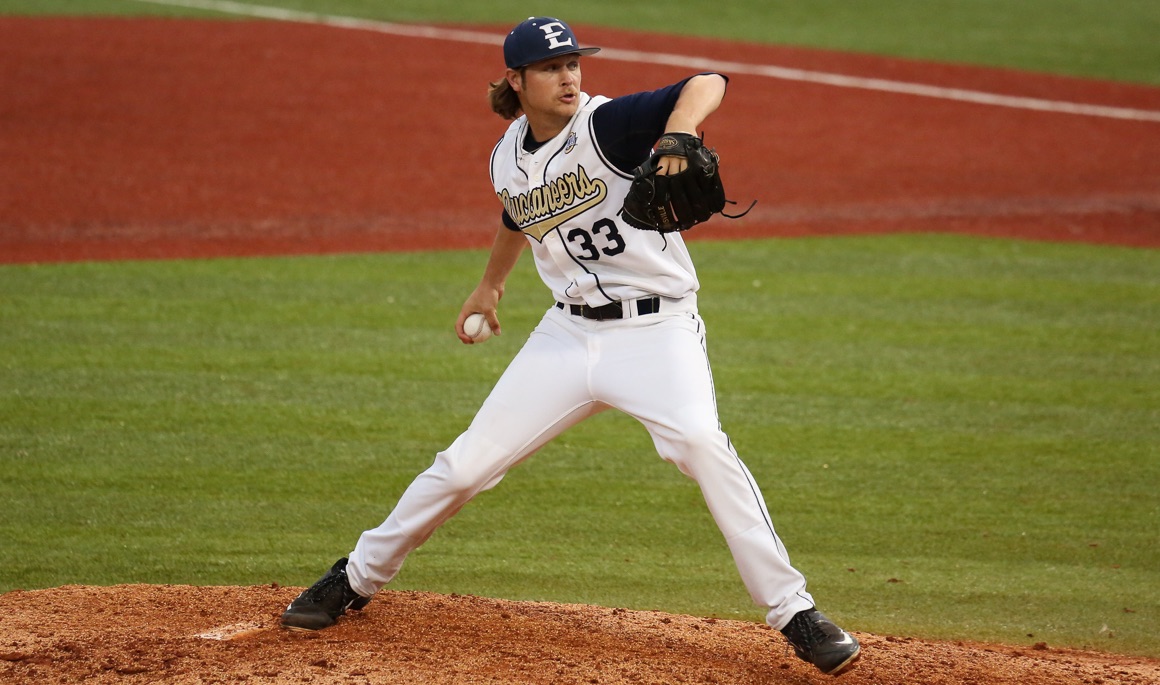 JOHNSON CITY, Tenn. (April 1, 2016) – With three unanswered runs in the last five innings, the ETSU comeback fell short as the Blue and Gold lost game one of the series to Furman at Thomas Stadium 6-5 even with strong relief pitching from Griffin Krieg (Nashville, Tenn.) and great offense and defense by Robby McCabe (New Port Richey, Fla.).

Krieg posted one of his best outings of the season as he entered the game in the sixth inning. He tossed four innings of one hit ball without a run to score and sat down ten Paladins in order. He didn’t allow a walk and struck out a pair on Friday night.

Offensively, ETSU tallied eight hits with three Buccaneers notching two-hit games. McCabe had two singles and a sacrifice bunt that gave ETSU the chance to comeback in the ninth inning. He also had a great day defensively at shortstop as he corralled seven groundouts. Lance Mays (Ridgely, Tenn.) broke up the Furman no-hitter in the fourth inning with a single to right. Mays finished his day going 2-4 with a run scored. Trey York (Knoxville, Tenn.) gapped two doubles and plated a RBI while touching home once. Hagen Owenby (Knoxville, Tenn.) hit his eighth double of the year and started the scoring for the Bucs with two runs scored off his hit in the third inning.

Furman worked quickly in the game as they had a chance to score runs in the inning with the bases loaded and no outs. However, Blake Smith (Ninety Six, S.C.) snagged a comebacker to the mound and tossed the ball over to first to turn a double play. He ended the inning on the next batter with a groundout to first.

Even after not plating any runs with the bases loaded, the Paladins made sure to get runs on the board as Landon Kay connected with a two run home run down the left field line to get the 2-0 advantage.

After working a 2-0 count, Cameron Whitehead sat back on the third pitch he saw to leadoff the inning and sent a towering solo bomb to the left field parking lot to extend the lead for Furman. Brandon Elmy hit a single up the middle and advanced to third after John Michael Boswell connected with a single to center. Kay hit a deep fly ball to right and padded their lead 4-0 on the sacrifice fly.

ETSU put a run in the bottom half of the inning and cut the Furman lead in half. Mays singled to right field to break up Will Gaddis’ no-hitter. McCabe hit a bloop single to center to put runners on first and second and no outs. Jeremy Taylor (Fayetteville, Ga.) laid down a sacrifice bunt to put two runners in scoring position. After a fly out, Owenby cranked a gap-splitting double to right center and got the Bucs on the board.

Whitehead led off the inning with a walk, and the Paladins spanked their third home run of the day night and moved the lead to 6-2. Smith settled down and set down the next three batters he saw.

McCabe worked a full count and hit his second single of the night. With one out, York split the gap in right center and scored McCabe from first to cut the lead in half again and make the game 6-3.

Krieg started his outing in the sixth inning and worked three straight perfect innings. He allowed his first hit of the night in the ninth with one out off a single up the middle. It didn’t faze him, as he forced the next batter to fly out and struck out the fourth batter of the inning.

York led off the inning with his second double and his tenth two-bagger of the season. Owenby flied out to deep left center, and York advanced to third to put him 90 feet from scoring. After a pitching change, Aaron Maher (Brentwood, Tenn.) walked to put runners at the corners with one out. Kevin Phillips (St. Louis, Mo.) hit a dribbler to short and scored York to make the game 6-4.

Jammer Strickland (Knoxville, Tenn.) came in to pinch-hit and walked on a full count. Mays tallied his second single to put two runners on. McCabe laid down a sacrifice bunt with two strikes to put the game-tying run on second. Taylor grounded to deep short but was only able to score one, but Mays advanced to third to advance the tying run. York came up and hit a ball to the left side, but the third baseman for Furman made a great ranging play to throw out the husting York at first.

Game two of the three game series with Furman will start April 2 at Thomas Field. First pitch is slated for 2 p.m. and Lee Haeberle (Hendersonville, Tenn.) is scheduled to take the ball for the Blue and Gold.