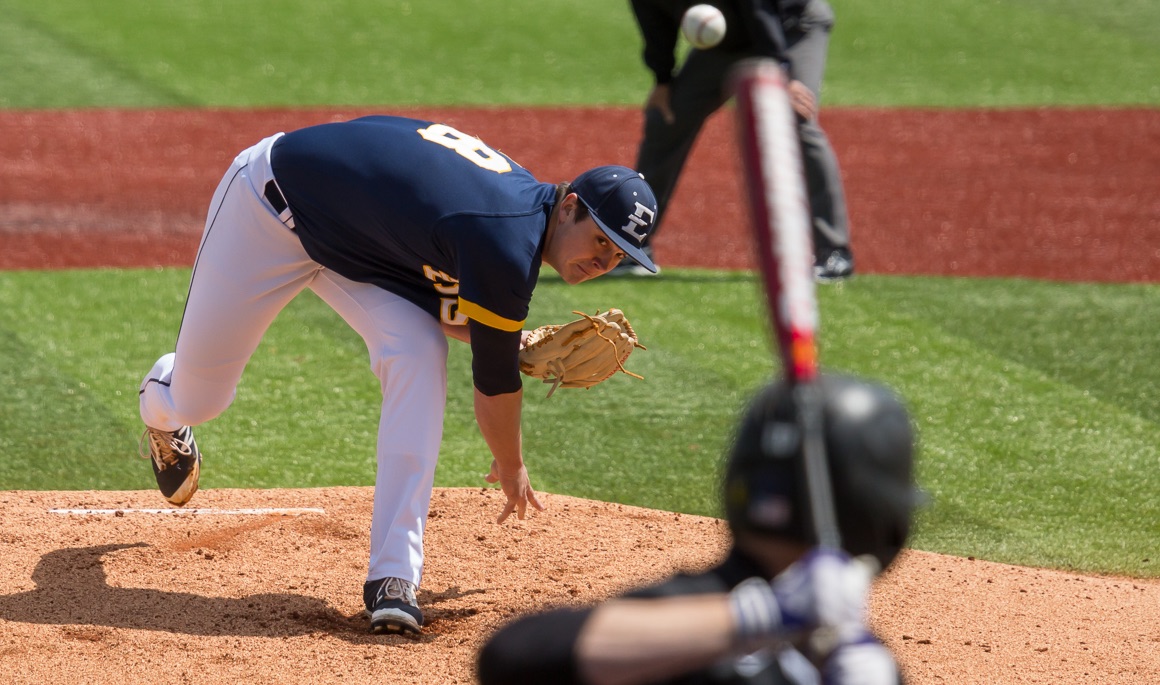 Haeberle nearly tossed a complete game as he went eight innings of four hit baseball. He allowed a pair of earned runs while striking out five on 119 pitches. He sat the Furman lineup down in order five times on Saturday including two times in back-to-back innings.

Robby McCabe (New Port Richey, Fla.) led the offensive charge as he batted leadoff for the first time this season. He finished the game going 3-4 with all three hits coming in the first four innings. He tallied a double and two singles while picking up a RBI and a run scored. Kevin Phillips (St. Louis, Mo.) bounced back as he tallied a two out, two RBI double in the third inning to make the game 4-0. Jeremy Taylor (Fayetteville, Ga.) roped a triple and scored two runs and also made a terrific diving catch in right center to prevent an extra base hit. Lance Mays (Ridgely, Tenn.) smacked a solo home run late in the game, and Blake Rowlett (Clarksville, Tenn.) had a two hit performance at Thomas Stadium.

The Bucs, however, started the scoring with the bases loaded. Hagen Owenby (Knoxville, Tenn.) connected with a fly out to score Jeremy Taylor from third and put runners at the corners for ETSU. Aaron Maher (Brentwood, Tenn.) followed with a RBI groundout to make the game 2-0. With two runners on and two outs, Phillips split the left center field gap and plated both Mays and McCabe to advance the score to 4-0.

ETSU added an insurance run in the inning after Jeremy Taylor roped his second triple of the season. He scored on the next play on McCabe’s bloop single to left field for his third hit of the afternoon.

The Paladins cut into the lead as Carter Grote led off the inning with a double to left center. Haeberle forced the next batter to line out, but after two throwing errors by ETSU, Grote was able to score after the ball trickled into the third base dugout. Haeberle made the next two Paladins fly out and strike out swinging to end the inning.

Mays padded the lead for the Blue and Gold as he crushed his second home run of the season on the first pitch he saw. The solo shot gave ETSU the 6-1 lead.

After working his fifth perfect inning, Haeberle came back out to pitch the ninth. He surrendered a walk and a double to lead off the inning, and head coach Tony Skole made the call to the bullpen and put the game in Peyton Taylors’ (Kingsport, Tenn.) hands. With six pitches, Peyton Taylor struck out both Jake Crawford and Andrew MacLatchie. However, Furman’s Landon Kay doubled to left and cut the lead in half, but Peyton Taylor worked out of the jam by forcing the last out to ground out to second.

After Saturday’s 6-3 win, ETSU moves to 13-13 overall and 2-3 in the conference. Furman dips to 11-15 overall and 3-2 in SoCon play. Haeberle remains perfect on the year going 3-0, and Matthew Quarles was pinned with his second loss on the year.

Game three and rubber match of the Furman series will start on April 3 at Thomas Stadium. First pitch is slated for 1 p.m. as the Bucs look to win their first conference series of the season.