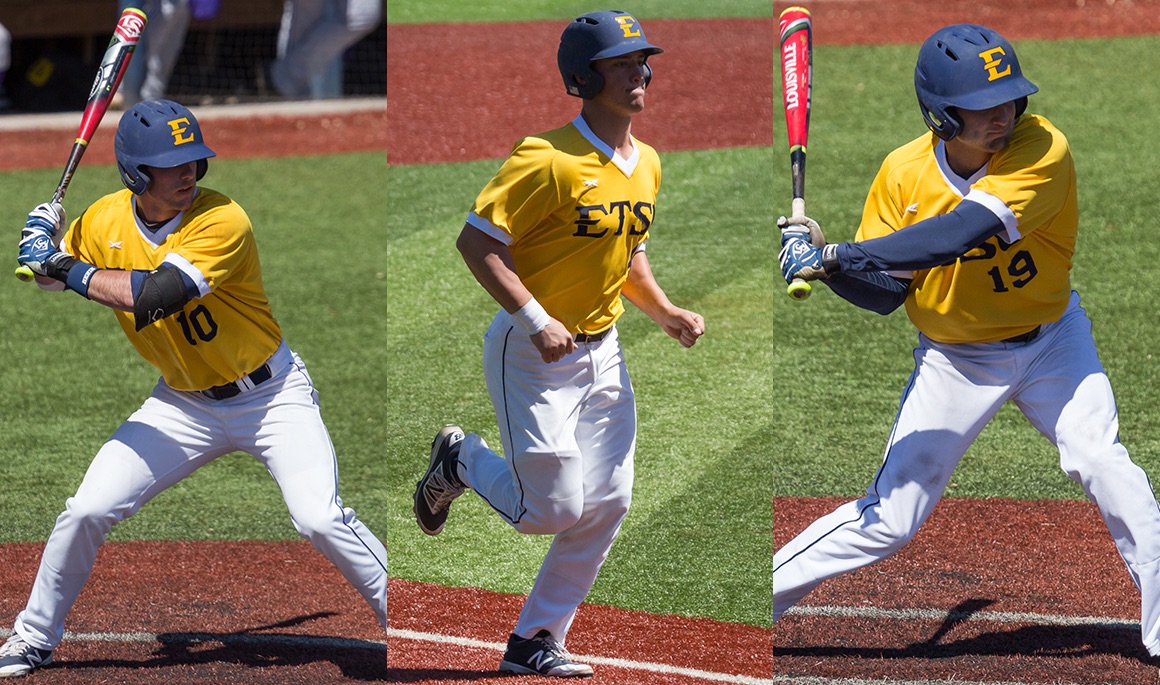 JOHNSON CITY, Tenn. (April 3, 2016) – ETSU’s bats were hot on Sunday at Thomas Stadium as the Bucs connected with 18 hits in the rubber series against Furman as the Blue and Gold went on to win 13-9.

Jeremy Taylor (Fayetteville, Ga.) kept his hot bat going as he went 2-3 with a bases clearing triple in the third inning to blow the game open for the Blue and Gold. He walked once and accounted for two runs scored for the Bucs. Blake Rowlett (Clarksville, Tenn.) contributed to the seven run third inning as he roped a two RBI single through the right side. He finished his day going 1-4 with three RBIs and a run scored. Lance Mays (Ridgely, Tenn.) smacked a double and a single while going 2-5 at the plate. The team walked seven times as compared to Furman’s one walk.

Victor Gonzalez (Mount Pleasant, S.C.) started the game for ETSU and was ruffed up early, but bounced back by tossing two scoreless frames and pitched an inning where an unearned run scored for the Paladins. The trio of pitchers that tossed for ETSU only allowed one walk in the 45 batters faced.

Furman worked quickly as Carter Grote tripled to right field to lead off the game. Sims Griffith singled up the middle to pull ahead 1-0. The Paladins cracked two singles and added one more run, but Gonzalez forced Landon Kay to fly out to right and made the next batter ground into a double play to end the inning at 2-0.

In his second start in the leadoff position, McCabe walked on five pitches. York and Owenby followed with two singles. Aaron Maher (Brentwood, Tenn.) walked to score McCabe from third and cut the lead in half. Even with the bases loaded and no outs, ETSU couldn’t tie the game as the next three batters went down in order.

The Paladins started the inning with back-to-back hit batsmen, and Cameron Whitehead worked the bases loaded with a single through the left side. Furman capitalized on a wild pitch to score the runner from third. However, Gonzalez worked out of another bases loaded, no outs situation with a strikeout and two groundouts. After adding another run in the top half, Furman led 3-1.

The ETSU lineup batted around in the inning as the team tallied for seven runs and seven hits in the inning. York smacked a no-doubter, solo home run to lead off the inning and pulled the game within one run. Both Owenby and Maher answered with singles and Kevin Phillips (St. Louis, Mo.) walked to make the bases loaded. Rowlett connected with a two RBI single that found the right side and gave ETSU their first lead of the afternoon at 4-3. Danny Carrier (Cincinnati, Oh.) carried the rally with his single to right center to make the bases loaded for a second time in the inning. Taylor split the left center field gap and cleared the bases with his second triple in his last two games. McCabe singled through the left side with the infield in and advanced the lead to 8-3.

The seven runs in the third inning was a season high in one inning for ETSU.

Brandon Elmy hit a one out single to center to start the rally for Furman. He advanced to second on a wild pitch and scored off a throwing error by ETSU to make the game 8-4.

Grote pulled the game within three runs for the Paladins as he smoked a solo home run to left center to make the game 8-5.

Mays led off the inning for the Blue and Gold with a walk, and Phillips followed with a walk of his own. Both runners moved up 90 feet after a failed pickoff attempt at second to put two runners in scoring position. Rowlett hit a sacrifice fly just steps from the right field wall and made the game 9-5 for ETSU. After a pitching change, Andrew Lasure (Stanford, Ky.) came up in a pinch-hit situation and crushed a double that burned the Furman centerfielder and made the game 10-5. Seth Cunningham (Bristol, Va.) pinch ran for Lasure and advanced to third off a wild pitch. Jeremy Taylor walked to put runners on the corners for ETSU. McCabe stretched the inning for the Bucs with a bunt single to score Cunningham from third. Taylor and McCabe moved up a base after a wild pitch by Furman, and York followed with a single that got past the diving Furman shortstop and made the game 13-5.

With two outs, Griffith snuck a two run homer over the left field wall and made the game 13-7. Ryan Simpler (Lewes, Del.) got the third out of the inning to fly out to center field to limit to damage in the inning.

Furman did not surrender as they started the inning with three straight hits highlighted by a RBI double that blooped down the left field line. Jake Crawford hit a soft grounder to third and scored Kay to make the game 13-9. ETSU ended the threat with a groundout to second base and won their 14th game of the season 13-9.

Gonzalez earned his second win in five starts this season. The Bucs move to 14-13 overall and 3-3 in conference play, and Furman drops to 11-16 and 3-3 in the SoCon. This was ETSU’s first three-game series win and first conference series win in 2016.

ETSU will continue their eight game home stretch versus NC A&T on April 5 at Thomas Stadium. First pitch is set for 6 p.m. The Bucs and Aggies met previously this season, and ETSU won 17-5 in Greensboro, N.C. The conference schedule will continue for the Bucs as they welcome Mercer to Johnson City on April 8-10.