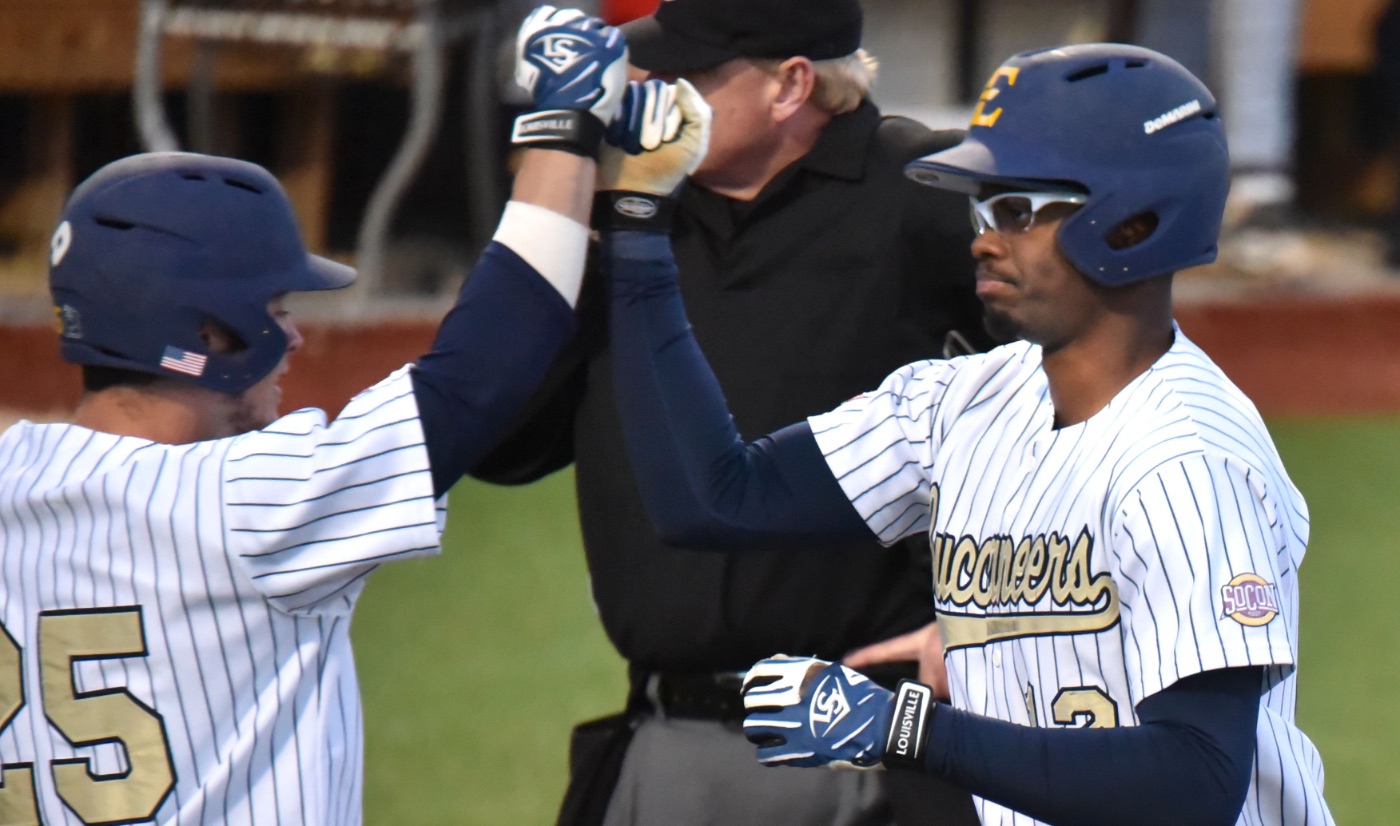 To go with their strong offensive output, the Buccaneer bullpen shut down the Aggies following their four-run first inning. Overall, the ETSU pen allowed one run on three hits and struck out eight in eight innings of relief. Of the five runs allowed by the ETSU pitching staff, two were earned.

Blake Smith (Ninety Six, S.C.), Jamin McCann (Kingsport, Tenn.), Logan Gentry (Kingsport, Tenn.) and Russell Koesters (Kingsport, Tenn.) combined to retire 18 of 21 hitters between the second and seventh innings. Smith earned the win (3-4) as he retired all six hitters he faced and struck out three, while McCann followed with two shutout innings of his own. Gentry and Koesters both pitched one scoreless inning, respectively.

ETSU’s starting one-thru-four hitters combined to go 10-for-19 with nine runs scored and eight RBI … Senior Robby McCabe (New Port Richey, Fla.) tied a career-high with a three-hit night, while he also scored three times and drove in two … Trey York (Knoxville, Tenn.) extended his streak of reaching base safely to 22 straight games after finishing 3-for-5 with one double, one RBI and two runs scored … Hagen Owenby (Knoxville, Tenn.) ended with two hits, one walk and drove in two, and Maher – who blasted his fourth home run of the season in a five-run fifth inning – went 2-for-5 with three runs and three RBI.

Kevin Phillips joined Maher with a homer in the fifth as he connected on a solo shot two plays later … Phillips finished the night going 2-for-4 with one double, two runs scored and three RBI, while Lance Mays (Ridgely, Tenn.) kept his streak of reaching base safely alive courtesy of a first-inning walk.

ETSU – who scored six first-inning runs – won for the seventh time when scoring in the first frame this season … The Bucs also improved to 11-1 when holding the opposition to five runs or fewer.

As a team, the Bucs recorded 16 hits, marking the 16th time this year ETSU has posted double-digit hits … In addition, the Blue and Gold have totaled 34 hits and 28 runs over their last two games.

With the win, ETSU swept the season set with North Carolina A&T as the Bucs defeated the Aggies, 17-5, last month in Greensboro … The Blue and Gold – who have won three straight (ties season high) – improved to 15-13 on the season … The Aggies dipped to 7-24.

North Carolina A&T struck for four runs as the Aggies picked up RBIs by Ryan Jantsch, Dawnoven Smith, Kyle Clary and Keenen Herring, but the Bucs responded with a big inning of their own – six runs on five hits – in the bottom half to grab a 6-4 lead. ETSU hit around in the inning as Robby McCabe had a two-hit inning, while it was his two-out single to left that drove in Dillon Clift (Soddy Daisy, Tenn.) and Blake Rowlett (Clarksville, Tenn.) to cap off the scoring. Joining McCabe with RBIs in the frame were Hagen Owenby, Kevin Phillips, Jeremy Taylor (Fayetteville, Ga.) and Clift. Owenby and Taylor both recorded RBI singles, while Phillips drove in Trey York on a fielder’s choice RBI ground out, and Clift worked a six-pitch walk to bring home Aaron Maher.

After right-hander Blake Smith worked a 1-2-3 second inning, the Blue and Gold added to their lead in the bottom half as Maher singled to right-center and sprinted home on Phillips’ two-out RBI single to left – making it a 7-4 score.

ETSU plated a run for the third straight inning as Taylor walked and scored on a throwing error by second baseman Tim Ravare, while McCabe – who reached on the error earlier in the frame – scored on Owenby’s RBI single to right-center, extending the Bucs’ lead to 9-4.

With the Buccaneer pitchers shutting down the Aggies’ hitters, ETSU’s bats continued to remain hot as Maher belted a three-run home run to right, and Phillips connected on a solo shot to left, pushing the Blue and Gold lead to 10, 14-4.

Both teams tacked on runs in the eighth as Clary’s RBI ground out scored Jantsch, while York’s RBI double brought in Danny Carrier (Cincinnati, Ohio) in the bottom half … Carrier reached on a two-out pinch hit single up the middle.

ETSU returns to SoCon play this weekend as the Bucs open a three-game series with reigning SoCon champion Mercer coming to Thomas Stadium … Game one of the three-game set begins Friday night at 6 p.m.