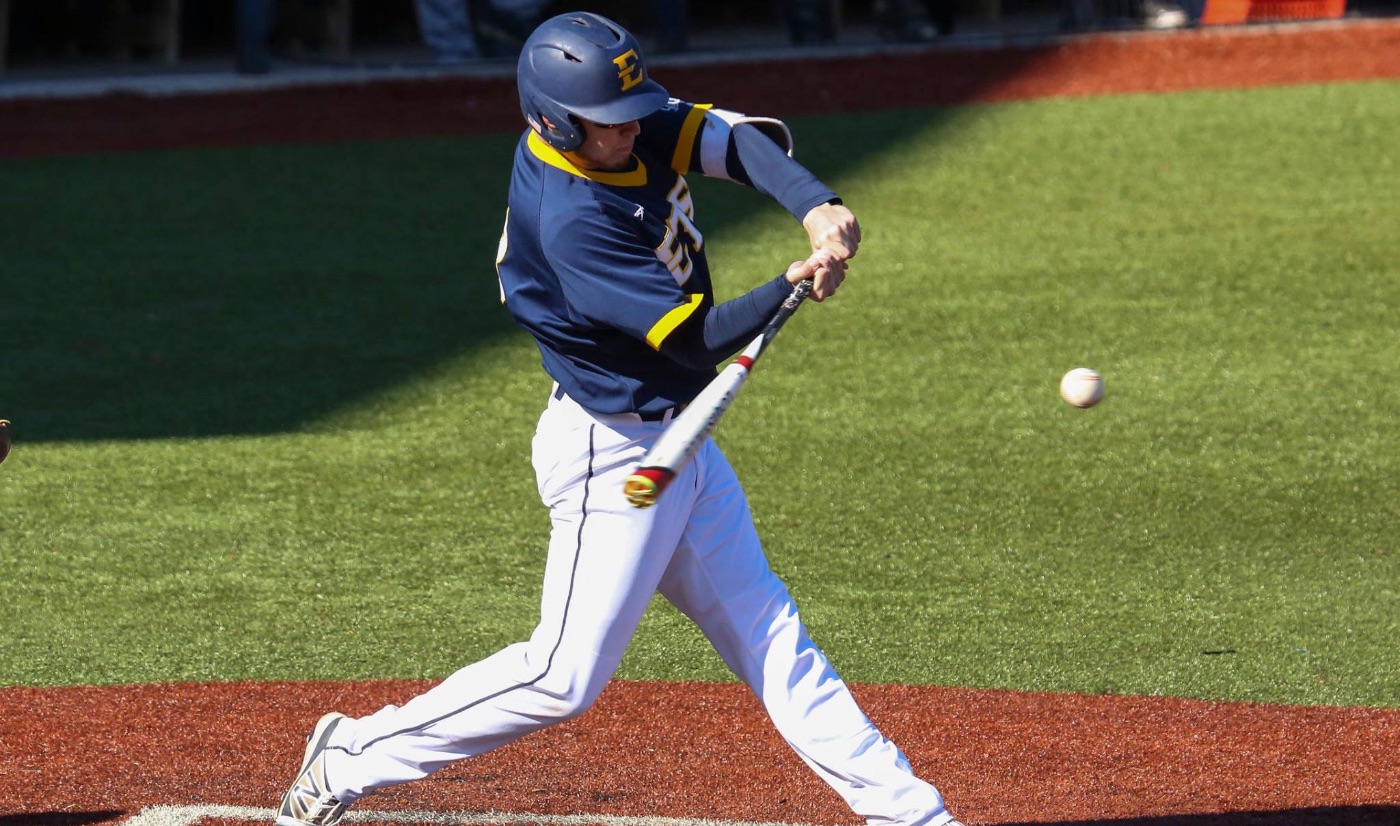 JOHNSON CITY, Tenn. (April 8, 2016) – The ETSU baseball team dropped a pair of home games to Mercer on Saturday afternoon at Thomas Stadium. Despite pulling within two runs late, the Bucs were unable to complete the rally as Mercer hung on for a 7-5 win from Friday’s suspended game, while the Bears used a seven-run eighth inning to rally for the 12-9 series-clinching win in game two.

The Bucs – who entered the series on a three-game win streak – dipped to 15-15, 3-5, while Mercer improved to 19-14, 5-3 following the back-to-back wins. ETSU looks to close out the series with a win in the series finale, which is scheduled for 1 p.m. on Sunday. Junior right-hander Victor Gonzalez (Mount Pleasant, S.C.) gets the start for ETSU, while freshman righty Kevin Coulter goes to the bump for Mercer.

Despite pulling within two runs late, the ETSU baseball team was unable to complete the rally as Mercer hung on for a 7-5 win in game one of the series on Saturday afternoon at Thomas Stadium. The game, which was suspended on Friday, resumed in the top of the eighth inning with Mercer leading, 5-3.

Griffin Krieg (Nashville, Tenn.) made his first start of the season and suffered the loss (0-2), while Ryan Askew (2-2) earned the winning decision for Mercer. Krieg was tagged for five runs on six hits, while walking a career-high seven batters in five innings of work. Askew gave the Bears a quality start as he allowed three runs on nine hits in seven innings. Conard Broom recorded the final two outs to pick up his first collegiate save.

The Bears led from the start as they plated a pair of two-out runs in the top of the first inning, while Mercer, picked up additional two-out clutch hitting in the third and fourth innings to go ahead, 5-0. Ben Upton belted a two-out solo home run to right field in the third, while two-out RBI singles by Kyle Lewis and Ryan Hagan extended Mercer’s lead to, 5-0.

ETSU’s bullpen silenced the Bears offense – which leads the country in home runs – from the fifth through eighth innings, as senior right-hander Krieg got out of a bases loaded jam in the fifth and junior left-hander Jamin McCann (Kingsport, Tenn.) registered a pair of scoreless innings in the sixth and seventh.

With the Buccaneer bullpen getting the job done, ETSU’s offense slowly chipped away at its deficit as senior Kevin Phillips connected on a solo home run in the fourth, while the Blue and Gold added two runs in the seventh to pull within two, 5-3. Like Mercer, the Bucs did their damage with two outs in the seventh as Robby McCabe started the rally with a single to left and later scored on Hagen Owenby’s (Knoxville, Tenn.) RBI single. Trey York (Knoxville, Tenn.) – who reached via a nine-pitch walk earlier – came around to score on Aaron Maher’s RBI single to left.

However, with the Blue and Gold rallying, Mother Nature rolled in – and after waiting out a 45-minute rain delay – the umpires suspended play in the top of the eighth inning.

The game resumed on Saturday afternoon, and Mercer regained momentum by plating a pair of unearned runs to go ahead, 7-3. Trey Truitt reached on a fielding error by third baseman Blake Rowlett (Clarksville, Tenn.) to restart the game, and he later scored on an RBI single by Lewis, while Edgeworth – who reached on a single – came home on Upton’s sac-fly RBI to right.

The Bucs scored two runs in the ninth on McCabe’s two-run blast to left, but Broom came in and retired two of the three hitters he faced to secure the series-opening win.

Ryan Hagan, Edgeworth and Lewis all finished with two-hit games, while Lewis, Upton and Madden combined to drive in six of the seven runs.

Hagen Owenby, Kevin Phillips and Caleb Longley (Cleveland, Tenn.) all belted home runs, while seven different Buccaneers recorded a hit, but the ETSU baseball team was unable to hold on to a late four-run lead as Mercer plated seven eighth-inning runs to rally for a 12-9 win in game two of the series.

Owenby, Phillips and Blake Rowlett all had two-hit games, while Longley belted his first home run as a Buccaneer in a two-run third inning. Phillips – who homered for the third straight game – drove in two runs, while Owenby recorded his team-leading ninth home run in the sixth. To go with his two hits, Rowlett also walked twice en route to reaching base four times on Saturday.

Senior right-hander Lee Haeberle (Hendersonville, Tenn.) got the start in game two but earned a no-decision after allowing four runs on seven hits in seven innings. Haeberle also struck out nine and walked three. Red-shirt junior Peyton Taylor (Kingsport, Tenn.) suffered the loss (3-2) as he surrendered six runs (four earned) on four hits in 1.2 innings. Austin Cox (2-1) earned the win for the Bears after tossing one scoreless frame with two strikeouts, and Austin Lord registered his fourth save closing out the game with 1.1 scoreless innings.

The game went back-and-forth as the Bucs jumped out to a 2-0 lead in the third thanks to Longley’s leadoff homer and an RBI single by Owenby; however, Mercer answered with three runs in the fourth to go ahead, 3-2.

From there, the Bucs continued to battle and regained a 4-3 lead courtesy of a two-run scoring single by McCabe in the bottom half of the fourth. After the Bears pulled even at four on an RBI double from Ryan Hagan, the Blue and Gold looked to be in control by scratching across three in the home half of the fifth and one more on an Owenby homer in the sixth to go back up, 8-4.

Unfortunately, the reigning SoCon champs didn’t back down, and Mercer scored seven runs on four hits and one error in the eighth to recapture an 11-8 advantage. In the inning, the Bears got an RBI double from Blaise Lezynski, an RBI single from Jose Hernandez, a three-run home run from Trey Truitt, RBI triple by Kyle Lewis and a sac-fly RBI from Steven Taylor.

Phillips homered in the bottom of the eighth to get within three, but the Bears got the run back an inning later to solidify the three-run win.

Nine different Bears registered a hit in the winning effort as Mercer out-hit the Bucs, 12-10. Charlie Madden, Lewis and Lezynski all had two hits each.