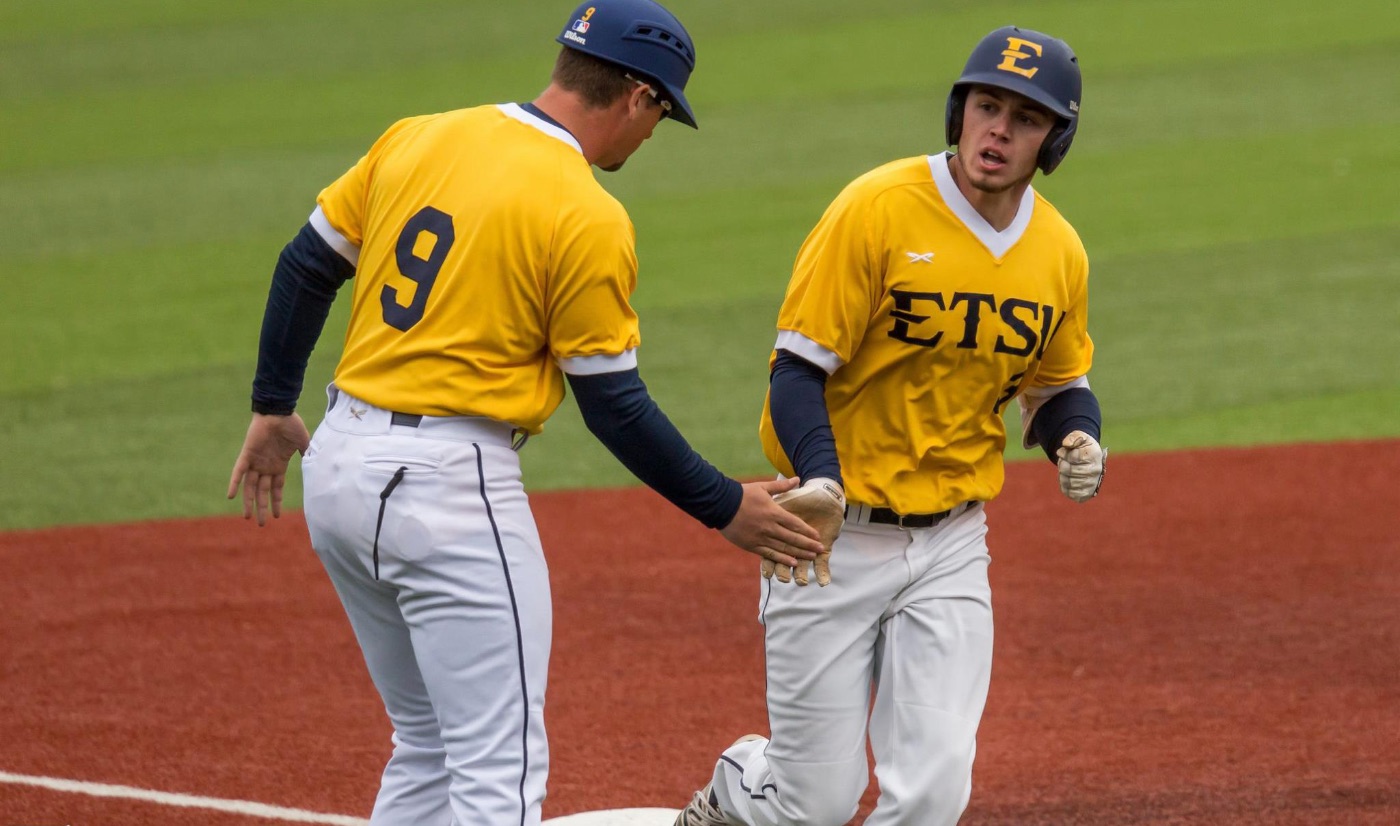 Bucs tie it with 5-run eighth, but Bears plate game-winning run in the ninth

JOHNSON CITY, Tenn. (April 10, 2016) – Caleb Longley’s (Cleveland, Tenn.) eighth-inning pinch hit grand slam helped ETSU erased a five-run deficit, but the Buccaneer baseball team was unable to complete the rally as Mercer plated the game-winning run on Adam Moore’s double in the top of the ninth en route to lifting the Bears to a 9-8 series sweep over the Blue and Gold on Sunday afternoon at Thomas Stadium.

After trailing by three runs after three and five after 7.5 innings, the Bucs battled to pull even at eight and also had the tying run at third in the ninth. Unfortunately, Aaron Maher (Brentwood, Tenn.) – who homered in the five-run eighth – hit a hard liner to centerfielder Kyle Lewis for the final out of the game.

Longley – who recorded ETSU’s first grand slam since April 22, 2012 (also against Mercer) – has homered in back-to-back games … The Cleveland, Tenn. native belted his first home run as a Buccaneer on Saturday and finished Sunday’s game with the one hit and four RBI.

Junior Blake Rowlett (Clarksville, Tenn.) reached base three times (one hit/two walks) and extended his hit streak to 11 straight games … Rowlett’s lone hit was a home run in the seventh.

Jeremy Taylor (Fayetteville, Ga.), Hagen Owenby (Knoxville, Tenn.), Kevin Phillips (St. Louis, Mo.), and Lance Mays (Ridgley, Tenn.) all finished with two hits … Mays – who went 2-for-4 with a run scored – has reached base in 17 consecutive games, while Owenby has recorded a hit in his last five outings … Jeremy Taylor finished with a triple and ripped his first home run of the season to put the Bucs on the board in the third inning.

Aaron Maher ignited the five-run eighth by connecting on a solo home run for his fifth of the year.

Victor Gonzalez (Mount Pleasant, S.C.) got the start on Sunday and picked up a no-decision after allowing five runs on nine hits in six innings … The junior right-hander also walked four and struck out five … Senior Peyton Taylor (Kingsport, Tenn.) suffered his second straight losing decision after surrendering the RBI double to Moore in the ninth … Taylor (3-3) was charged with the one run and allowed two hits in one-third of an inning.

As a team, the Bucs finished with 13 hits, but three errors – including one by Mays in the eighth – proved to be costly … Mays dropped a two-out pop fly to prolong the inning, which later led to three unearned runs crossing the plate.

Mercer, like ETSU, posted 13 hits and was led by two-hit games from Danny Edgeworth, Kyle Lewis, Ryan Hagan and Ben Upton … Nine different players recorded a hit for the Bears, while Hagan was one of six players to drive in a run … Hagan doubled and finished with four RBI.

Freshman right-hander Kevin Coulter started the game for the Bears and issued four runs on eight hits in 7.1 innings, but Austin Lord came out of the pen to earn the win … Lord (3-0) allowed two runs on two hits in two-thirds of an inning, and Austin Cox picked up the save (2) by inducing Maher into a game-ending line out to center with the tying run at third.

Mercer stormed out of the gates early as the Bears pounded five first-inning hits and jumped out to a 3-0 lead before the Bucs came to bat.

Despite getting a leadoff triple to start the bottom of the first, Taylor was left stranded as Coulter retired the next three ETSU hitters to keep the Blue and Gold off the board. Following the three-bagger to left-center, Robby McCabe (New Port Richey, Fla.) popped out to first, Trey York (Knoxville, Tenn.) tapped one back to the mound and Hagen Owenby grounded out to short on the first pitch he saw from the Mercer freshman hurler.

Both teams tacked on solo runs in the third as Lance Mays lost what would have been the final out of the inning in the sun, resulting in an RBI triple for Ben Upton, while Taylor ripped a one-out home run over the wall in right-center – making it a 4-1 game.

From there, both teams were held scoreless for the next two innings, but Mercer pushed across a run in the sixth on an RBI single by Trey Truitt extending the lead to, 5-1.

The Bucs then used the long ball to ignite the comeback as Aaron Maher and Blake Rowlett both went yard in the seventh to pull ETSU within two, 5-3. Dillon Clift (Soddy Daisy, Tenn.) would’ve made it a three-home run inning, but Kyle Lewis’ leaping grab at the wall in left-center robbed the freshman catcher of his first collegiate homer.

Senior left-hander Josh Jacques (Rollinsford, N.H.) got the first two Mercer hitters out with ease to start the eighth, but with two outs and no one on base, Lance Mays dropped what would’ve been the third out of the frame and allowed Jose Hernandez to reach second. Following the miscue, the Bears plated three unearned runs in the inning to go ahead, 8-3.

ETSU continued to battle and tied the game at eight in the home half of the inning. With one out, York, Owenby and Phillips registered three straight singles, while Mays beat out an infield two-out single later in the inning to load the bases. Mays’ hustle play paid huge dividends as Caleb Longley stepped to the plate as a pinch hitter and took the first pitch he saw from Austin Lord over the wall in left for the grand slam.

However, the Bears clawed back ahead in the top of the ninth as Jackson Ware led off with a single, moved to second on a sac-bunt and scored on Moore’s RBI double to left-center. Senior left-hander Jamin McCann (Kingsport, Tenn.) came out of the pen to limit the damage as he recorded two straight outs to end the inning, while keeping the deficit to the lone run, 9-8.

In the bottom of the ninth, McCabe reached on a leadoff fielding error, but York’s check swing resulted in a 1-6-3 double play. With the Blue and Gold down to their last out, Owenby doubled to left and pinch runner Seth Cunningham (Bristol, Va.) went to third on a wild pitch. Following an intentional walk to Phillips, Cox replaced Nick Spear on the mound and forced Maher into the game-ending line out to center.