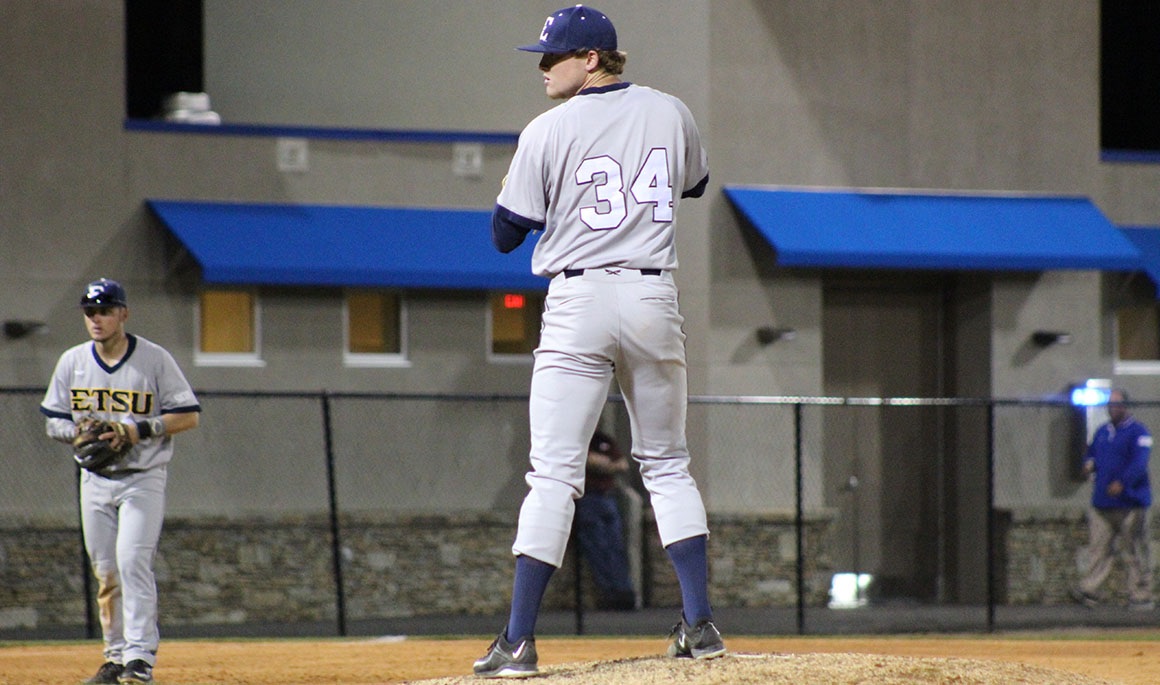 ASHEVILLE, N.C. (April 13, 2016) – After coming up empty on a bases loaded situation in the top of the 14th, the ETSU baseball team was unable to keep the marathon game alive for another inning as Carmine Pagano belted a two-out walk-off home run over the left field fence to cap off a 7-5 comeback win for UNC Asheville on Wednesday night at Greenwood Field.

Despite trailing 3-0 through four complete innings, ETSU rallied and went ahead 5-3 after scoring a run in the fifth and plated a pair of runs in the sixth and seventh. However, the Bulldogs fought back with a run in the bottom of the seventh and tied the game at five on a two-out throwing error by shortstop Robby McCabe (New Port Richey, Fla.).

From there, ETSU put a runner in scoring position in four of the next six innings, but the Blue and Gold couldn’t come away with the clutch hit. The Bucs struck out twice and hit into two double plays to end the threats before the game-ending heroics by Pagano. The home run was the first of the season for the UNCA No. 9 hitter.

In a game that lasted nearly five hours (4:43), both teams had golden opportunities to put the game away, but they combined to leave 30 runners on base and went 6-for-39 with runners in scoring position.

ETSU’s one-thru-four hitters combined for eight of its 13 hits and scored three of the five runs as senior Jeremy Taylor (Fayetteville, Ga.) led the way with a 3-for-5 effort. Taylor also walked once and scored a run. McCabe and Hagen Owenby (Knoxville, Tenn.) both finished with two hits, while Trey York (Knoxville, Tenn.) recorded a hit and scored a run. Kevin Phillips (St. Louis, Mo.) drove in two runs on sacrifice flies and Caleb Longley (Cleveland, Tenn.) posted two hits, one run and one RBI. Blake Rowlett (Clarksville, Tenn.) extended his hit streak to 12 straight games, and McCabe has hit safely in eight straight contests.

On the mound, nine different pitchers combined for 19 strikeouts, which set a new single-game program record. Junior Blake Smith (Ninety Six, S.C.) struck out a career-high seven in 2.2 innings out of the pen, while Jamin McCann (Kingsport, Tenn.) fanned three and Ryan Simpler (Lewes, Del.), Logan Gentry (Kingsport, Tenn.), Russell Koesters (Kingsport, Tenn.) and Zach Thompson (Ooltewah, Tenn.) each struck out two each. Sophomore left-hander Andy Higley (Knoxville, Tenn.) recorded one strikeout in his one inning of work. The previous single-game record was 16, which was accomplished twice – the last being on March 25, 2005 against UNC Greensboro.

McCann suffered the loss (2-2) after allowing two runs on three hits in 2.2 innings of relief. The Kingsport, Tenn. native retired six of the first seven hitters he faced before issuing a leadoff single to Dan Wilson in the 14th. Gentry made his first start of the season and allowed one run on two hits and struck out two in two innings. Thompson, Koesters, Simpler and Dillon Cate (Sevierville, Tenn.) combined for five scoreless innings out of the pen.

With the setback, ETSU has now lost four straight and moved to 15-17 on the season, while the Bulldogs – who defeated then-No. 11 North Carolina last week – improved to 10-24.

The Bulldogs struck first as Kyle Carruthers reached on a two-out single, stole second and scored on Joe Tietjen’s RBI double to left in the bottom of the first, while scratching across two runs in the third to extend their lead to, 3-0.

After being held to a pair of hits in the first four innings, ETSU finally got rolling between the fifth and seventh innings and jumped ahead, 5-3. Caleb Longley got things started in the fifth as he reached on a one-out single and scored on Blake Rowlett’s RBI double, but the Clarksville, Tenn. native was called out at third as he tried to extend the hit into a triple. From there, the Blue and Gold got back-to-back hits from Jammer Strickland (single) and Jeremy Taylor (double), but Robby McCabe hit into an inning-ending ground out to third, keeping it a 3-1 UNCA lead.

The Bucs’ hot bats carried over into the sixth as ETSU plated two runs on two hits to tie the game at three. Trey York led off with a double, moved to third on Hagen Owenby’s deep fly out to center and scored on Kevin Phillips’ fielder’s choice RBI. The inning continued when Aaron Maher (Brentwood, Tenn.) hustled down the first base line to beat out a potential inning-ending double play. From there, Maher looked to have been caught stealing as Austin Fahr threw over to first – but despite the ball beating him at second – the Buccaneer outfielder dodged the tag and was called safe for his team-leading ninth stolen base of the season. Following a brief stoppage of play as UNC Asheville head coach Scott Friedholm came out to argue the call, Longley doubled to deep straightaway center to pull the Bucs even at three.

UNC Asheville threatened in the sixth as they had runners on the corners with only one-out, but red-shirt sophomore right-hander Dillon Cate kept his composure induced Carmine Pagano into an inning-ending 5-4-3 double play to keep the game tied at three.

ETSU finally took its first lead of the night in the seventh when Owenby and Phillips drove in runs to go up, 5-3. Owenby’s high chopper into right plated Taylor – who was hit by a pitch to lead off the inning – while McCabe walked and scored on Phillips’ sac fly RBI to deep center.

The Bulldogs pushed across a run on an RBI single by Tietjen in the bottom of the seventh, but with one out and runners on first and second, Blake Smith came out of the pen to keep ETSU’s 5-4 lead intact. Smith struck out the two UNCA hitters he faced to get the Blue and Gold out of the jam.

UNCA tied the game at five on a two-out throwing error by McCabe in the eighth, but Smith struck out Carruthers swinging to end the frame while leaving runners on second and third.

The Bucs missed a chance in the ninth as they had runners on second and third before Longley ended the inning with a strikeout.

Smith worked his magic again in the bottom of the ninth as the Bulldogs had two on and two out, but the junior right-hander got Scott Kobos out looking for his seventh strikeout of the night.

In the 10th, Taylor reached on a two-out single and stole second, but McCabe struck out swinging to end the threat. From there, the Bucs would go hitless until McCabe’s one-out single in the 13th. Again, the Blue and Gold threatened as they had runners on first and second, but York hit into an inning-ending double play. Then, in the 14th, Owenby led off with a double, and UNCA gave a pair of one-out intentional walks to Maher and pinch hitter Danny Carrier (Cincinnati, Ohio). However, Rowlett hit into the inning-ending 4-6-3 double play.

After ETSU’s pitchers worked out of jams in the ninth, 11th and 13th innings, the Bucs couldn’t escape trouble for a fourth time in the 14th. Wilson led off with a single, advanced to second on a sac bunt – and after McCann got a ground out to short for the second out – Pagano lifted one to left for the walk-off win.

Pagano was one of six Bulldog hitters to finish with two hits, while he also scored three runs and drove in two. Left-hander Spencer Orr (2-3) held ETSU scoreless in the final three innings to earn the win. Orr scattered two hits and walked three.