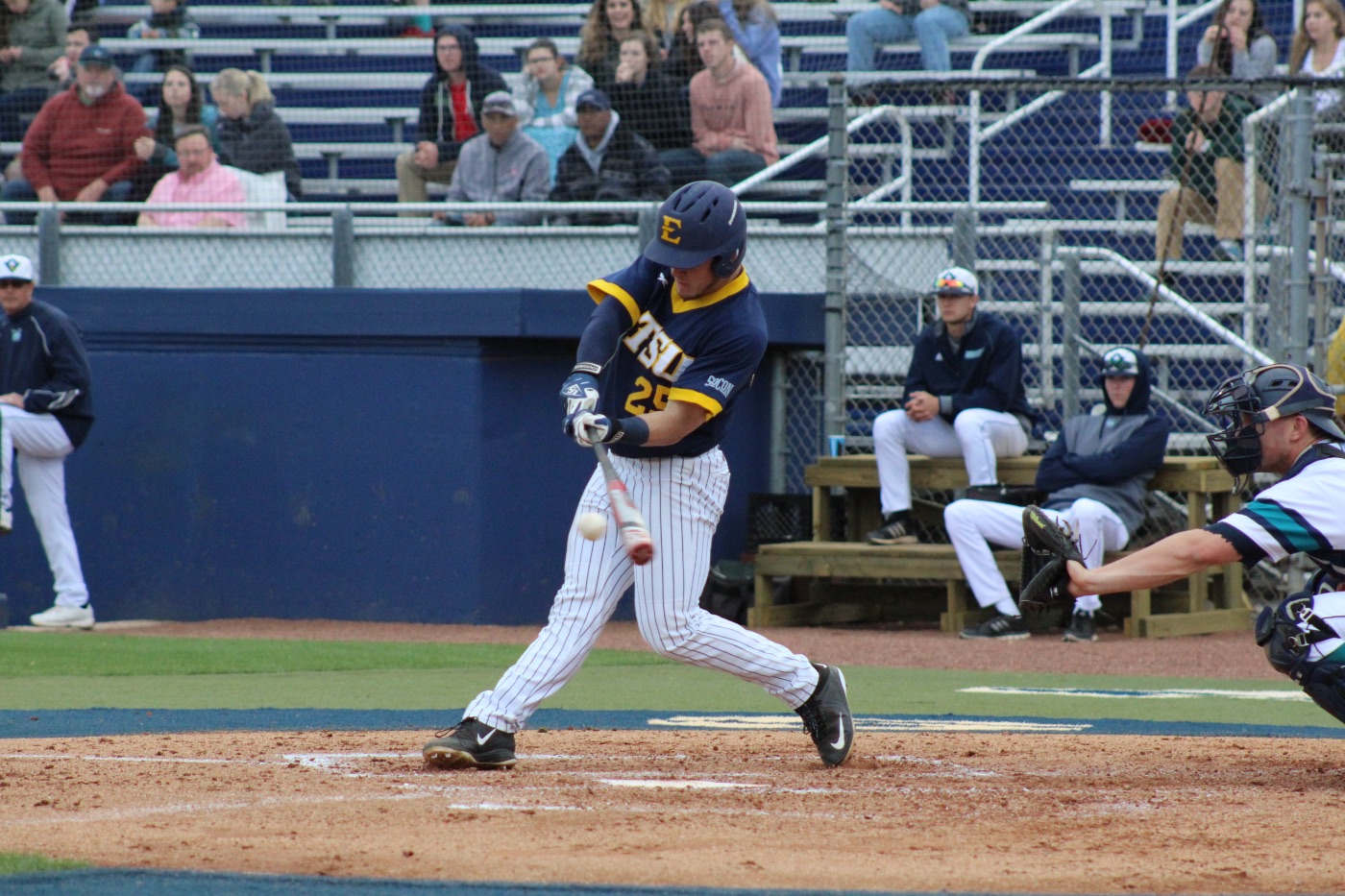 Blake Rowlett extended his hitting streak to 13 straight games in game one of the series at UNC-Wilmington.
Bucs slip in series opener at UNCW
ETSU at UNCW | April 15, 2016
Related Links

WILMINGTON, N.C. (April 15, 2016) – Backed by another double-digit hit performance, ETSU baseball fell on the road to UNC Wilmington on Friday night, 15-5, at Brooks Field. The Bucs scored four runs off seven hits in the first two innings but scattered four hits in the rest of the game.

All nine starters for ETSU picked up a hit on Friday night ... Trey York (Knoxville, Tenn.) led the surge as he went 2-for-3 with a pair of doubles along with an RBI and two runs scored ... Blake Rowlett (Clarksville, Tenn.) extended his hit streak to 13 straight games with a single up the middle in the second inning ... Aaron Maher (Brentwood, Tenn.) stepped up in clutch situations as he ended his day with two RBIs, and Lance Mays (Ridgely, Tenn.) extended his on-base streak to 13 straight games … Maher also stole second for his team-leading 11th stolen base of the season.

Senior outfielder Jeremy Taylor (Fayetteville, Ga.) made his 200th career start on Friday night … Taylor went 1-for-4 with an RBI.

The Bucs’ bats struck for 11 hits Friday, which extends the team’s streak to seven straight games with double-digit hits.

Senior right-hander Griffin Krieg (Nashville, Tenn.) made his second straight Friday night start, but was pinned with the loss (0-3) … Krieg allowed seven runs on six hits and walked four in 1.1 innings. UNCW starter Ryan Foster issued five runs on a career-high 11 hits but still picked up his conference-leading seventh win of the campaign ... Sophomore right-hander Josh Roberson came out of the pen to pitch the final two innings … Roberson didn’t allow a hit and all six of his outs recorded came via the strikeout.

Dillon Cate (Sevierville, Tenn.) and Connor Bartow (Jonesborough, Tenn.) gave the Blue and Gold scoreless appearances out of the bullpen … Cate tossed two innings of hitless ball, and Bartow held the potent Seahawk offense off the board as he worked out of a bases loaded jam in the eighth ... Despite allowing a pair of hits and a walk, Bartow registered two strikeouts to get out of trouble in the inning.

With the loss, ETSU dipped to 15-18, while UNCW won its sixth straight game and improved to 21-9.

The Bucs pushed across the first run of the night as Trey York doubled to left and scored when Aaron Maher smacked the second pitch he saw from Ryan Foster for an RBI single up the middle to put the Bucs ahead, 1-0.

Unfortunately, the lead didn’t last long as UNCW plated three runs in the bottom half of the first to gain its first lead of the night. Griffin Krieg surrendered a single and back-to-back walks to load the bases for the Seahawks’ leading hitter Nick Feight. Feight came through with a clutch single through the left side to score two runs and put UNCW ahead. After Krieg induced a fly out to left on the next at-bat, a pair of Seahawk runners advanced into scoring position on a passed ball, and Andy Austin hit a sacrifice fly to left to make the game, 3-1.

The Bucs retaliated in the top half of the inning as they started the inning with four straight hits by Robby McCabe, Blake Rowlett, Caleb Longley (Cleveland, Tenn.), and Lance Mays. Longley stroked a single back up the middle to score McCabe from second and put runners at first and second. Mays then tallied a bunt single to the pitcher to the load the bases, while Jeremy Taylor’s RBI ground out plated Rowlett. York gave the Blue and Gold their second lead of the night with a sacrifice fly to right to make the score, 4-3.

However, UNCW used a four-run second inning to take the wind out of the Buccaneer sails as the Seahawks regained a 7-4 advantage. Feight drove in two with a single to left, while Casey Golden and Daniel Stack drove in a run each in the frame.

The Seahawks never relinquished their lead as Foster retired the Bucs in order in both the third and fourth innings – and after allowing a run on Maher’s fielder’s choice RBI in the fifth – UNCW put the game out of reach by scoring six runs in the bottom half to extend its lead to, 15-5.

Both teams were held scoreless for the remainder of the night and the Seahawks handed ETSU its fifth straight setback.

Game two of the three-game set is set for 2 p.m. on Saturday. Senior right-hander Lee Haeberle (Hendersonville, Tenn.) is set to take the mound for the Bucs and will be opposed by Alex Royalty (5-2).