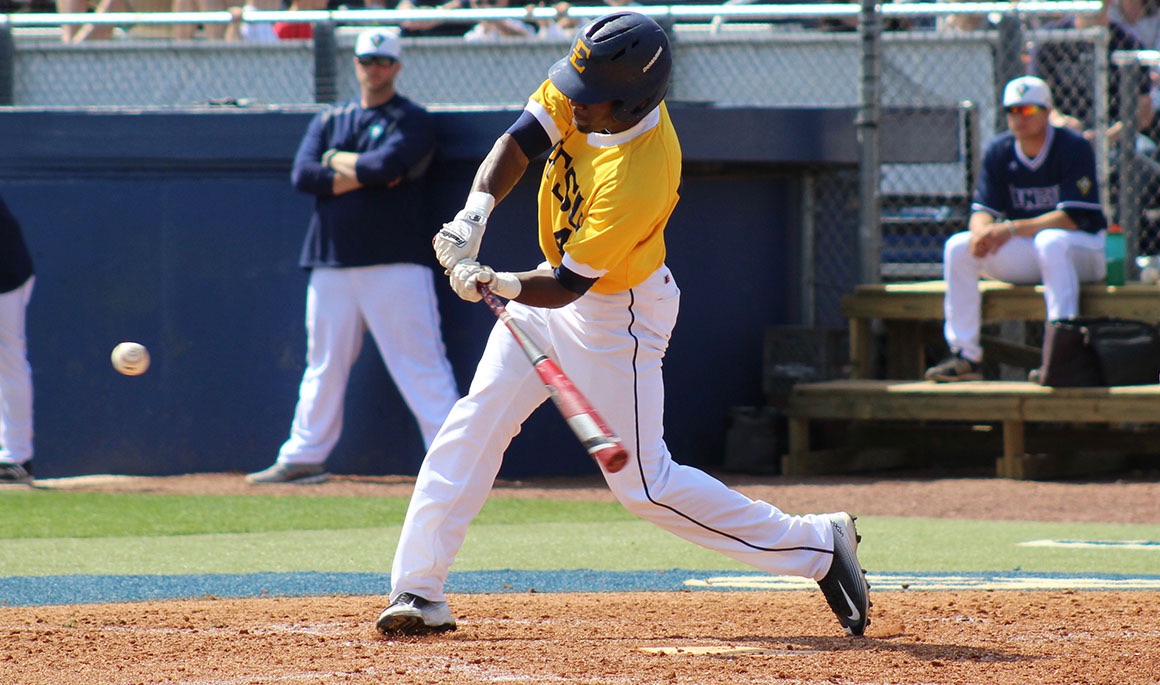 WILMINGTON, N.C. (April 16, 2016) – UNC Wilmington plated a run in the first and tacked on nine more in the third en route to securing a 17-7 series-clinching victory over ETSU on Saturday afternoon at Brooks Field.

Six Bucs had a hit against UNCW including three extra-base hits ... Lance Mays (Ridgely, Tenn.) led the team with a three-run home run that came in the six-run fourth inning ... Caleb Longley (Cleveland, Tenn.) accounted for a pair of RBIs in the same inning as he roped a double past a diving Nick Stuart in right ... Blake Rowlett (Clarksville, Tenn.) and Kevin Phillips (St. Louis, Mo.) were the other Bucs to tally an RBI on Saturday ... Aaron Maher (Brentwood, Tenn.) smacked a triple down the right field line and later scored on a Phillips’ sacrifice fly.

The ETSU offense went 3-for-3 in RBI opportunities and 5-for-12 with two outs ... The Bucs totaled six RBIs in two-out situations as well ... However, UNCW outpaced the Bucs in two-out chances as the Seahawks were 13-for-21 and drove in 11 runs with two outs … In addition, UNCW finished 7-for-19 with runners in scoring position.

UNCW totaled a season-high 23 hits … Two of Daniel Stack’s hits went for home runs, while Ryan Jeffers was a triple shy of hitting for the cycle ... Nick Feight drove in a team-high six runs – three of which came in two-out situations.

Sophomore right-handed pitcher Austin Easter (1-0) earned his first win of the season as he went three innings with four strikeouts.

The Seahawks opened the scoring in the first inning as they got a two-out RBI by Nick Feight, but ETSU matched their score to pull even at one in the second. Maher led the inning off with a triple down the right field line, and Phillips drove in the Buccaneer left fielder on a sacrifice fly to right.

However, UNCW’s offense caught fire as they totaled nine runs on ten hits in the third inning to take a 10-1 lead. The Seahawks led off the inning with three straight singles, while Feight drove in a pair of runs as he split the gap in right-center to extend their lead to three. Despite getting the second out of the inning on a foul out to first, ETSU couldn’t stop the bleeding as UNCW plated six two-out runs – two coming on a home run by Stack and one on an RBI triple by Linkous – to go ahead by nine.

ETSU had some fight left in them as they jumped on UNCW starting pitcher Alex Royalty in the top of the fourth to cut its deficit to three, 10-7. In the inning, the Bucs scored seven runs on six hits off Royalty. Hagen Owenby (Knoxville, Tenn.) started the rally by working a one-out walk, while Robby McCabe (New Port Richey, Fla.) and Phillips each singled to load the bases for Rowlett. The Buccaneer third baseman worked a four-pitch walk to bring in Owenby, and Longley followed with a two-RBI double to right. Mays capped off the scoring spree by connecting on his three-run shot over the wall in right-center to make it a three-run game.

Unfortunately, the Seahawks went to the bullpen in the fifth, and the UNCW hurlers held the Blue and Gold scoreless for the final five innings.

Smith limited the UNCW lead as he tossed the fourth and fifth innings. He let one unearned run score as the Seahawks extended their lead to 11-7.

The Seahawk offense added four runs in the seventh and scratched across two more in the eighth to post its seventh straight win.

The series finale will begin Sunday at 2 p.m., as junior college transfer Victor Gonzalez (Mount Pleasant, S.C.) is slated to start for the Bucs. He is 2-0 on the year and will be opposed by junior right-hander Cory Gantz.