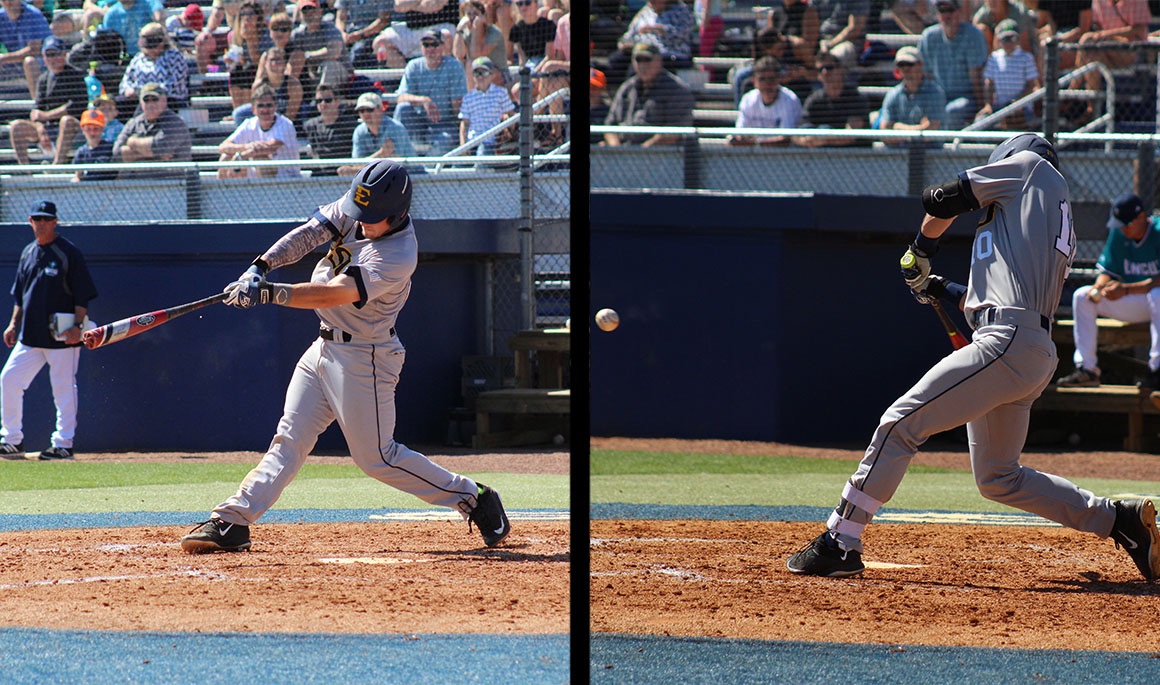 WILMINGTON, N.C. (April 17, 2016) – Despite taking a four-run lead into the eighth inning, the ETSU baseball team couldn’t hang on as UNC Wilmington scored nine runs in the bottom of the eighth to rally past the Buccaneers in a 16-11 slugfest on Sunday afternoon at Brooks Field.

Of the 29 combined hits between ETSU and UNCW, 11 went for extra bases – four doubles and seven home runs.

Senior Jeremy Taylor (Fayetteville, Ga.) had a season-high day as he went a perfect 4-for-4 with all being singles ... Taylor led off four innings and got one base all four times ... Senior Kevin Phillips (St. Louis, Mo.) came up in clutch situations as he collected two hits and two RBIs.

Both Lance Mays (Ridgely, Tenn.) and Blake Rowlett extended their on-base streaks to 20 and 15, respectively ... Sophomore Aaron Maher (Brentwood, Tenn.) kept his hot bat alive as he tallied a single on Sunday to make it 10 straight games with a hit.

The Bucs sent out five pitchers to toe the rubber in the Sunday series finale ... Sophomore right-hander Ryan Simpler (Lewes, Del.) found rhythm as he went 3.1 innings with two hits and one run scored ... Jamin McCann (Kingsport, Tenn.) silenced the Seahawks’ bats between the fifth and seventh innings but was then charged for four of the nine runs in the eighth.

Red-shirt junior Peyton Taylor (Kingsport, Tenn.) was pinned with the loss (3-4) as he went 0.2 innings while allowing three runs during his time … Jared Gesell (1-1) held ETSU scoreless for the final 2.2 innings and earned the win.

Jeremy Taylor got things started early as he singled through the left side to start the game, while Trey York doubled to right to put runners in scoring position. From there, Taylor scored on a wild pitch and York scored on a sac fly RBI by Aaron Maher to make it a 2-0 game.

The Seahawks matched the Bucs in the bottom of the first off the first home run of the game for Gavin Stupienski. With the bases loaded, Daniel Stack cracked a sacrifice fly to center to take the narrow 3-2 lead.

ETSU collected a run of its own to knot the game in the top of the second. Blake Rowlett smacked a single to lead off the inning, Lance Mays knocked a single of his own, and Jeremy Taylor was hit by a pitch to load the bases with one out. Trey York hustled out an infield single to score Rowlett from third and evened the game at, 3-3.

However, UNCW retaliated in the bottom of the second as they smacked back-to-back home runs to make the game 7-3.

The Blue and Gold chipped away at their deficit in the third, as they put two runners on with two outs. Dillon Clift (Soddy Daisy, Tenn.) hit a hard ground ball to third that got passed the UNCW third baseman Daniel Stack, which allowed Blake Rowlett to score from second making it a 7-4 score.

In the bottom half of the inning, Ryan Simpler worked out of a jam as UNCW led off the inning with a double, but he forced a fly out, a strikeout and a ground out to end the threat and hold the Seahawk offense scoreless.

The Bucs regained the lead in the fourth as York and Rowlett both cranked a home run to pull ahead, 9-7. Taylor walked to lead off the five-run inning, and York knocked a home run that snuck over the fence in dead center. Hagen Owenby (Knoxville, Tenn.) and Aaron Maher each reached base and trotted home on Rowlett’s blast to right.

In the seventh, Taylor reached safely by means of his third single of the afternoon. The Blue and Gold walked twice following the leadoff single to load the bases for the fourth time of the afternoon. After failing to score with the bases loaded in the fifth, Kevin Phillips spanked a two-run scoring single to center to extend ETSU’s lead to, 11-7.

The Seahawks then mounted their eight-inning comeback as they tallied nine runs on ten hits including two home runs with one being a grand slam by Stupienski. After the damage was stopped, UNCW found itself ahead 16-11 going into the ninth.

Kevin Phillips tried to start a rally as he picked his second hit of the day (a double), but the Bucs struck out and flew out to end the game.

ETSU will continue their road trip as they head to Eastern Kentucky on April 20. First pitch for the non-conference game will start at 4 p.m.