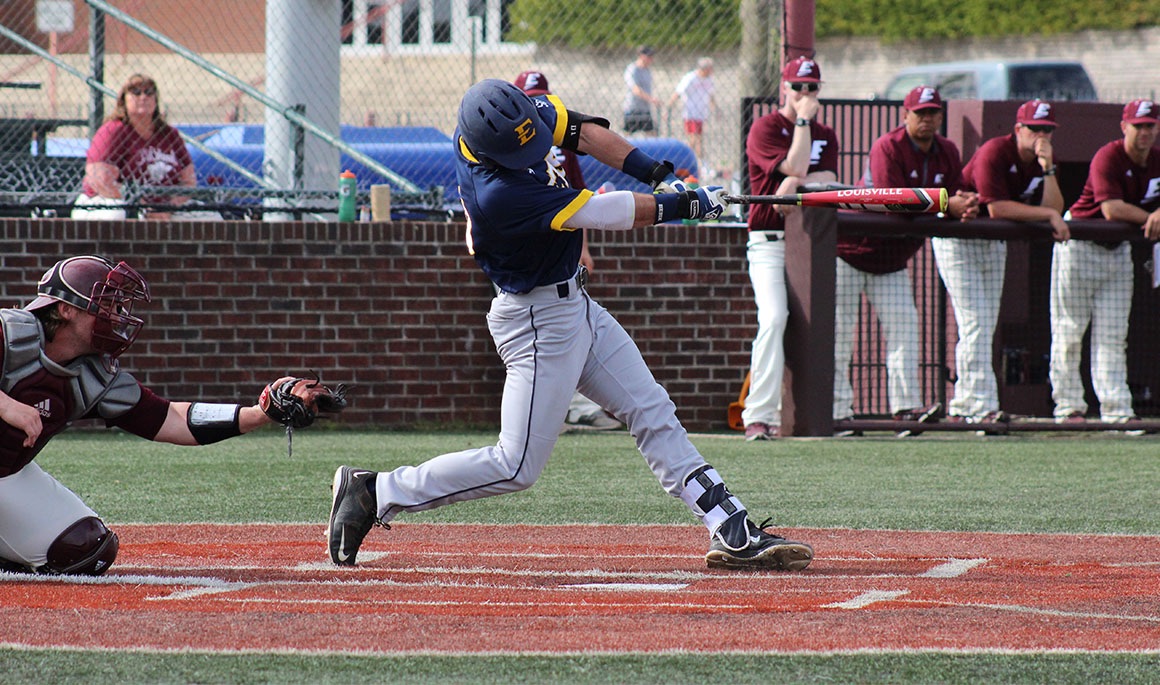 RICHMOND, Ky. (April 20, 2016) – Backed by a 13-run fifth inning and Trey York’s (Knoxville, Tenn.) seven-RBI performance, the ETSU baseball team cruised to a 17-8 win at Eastern Kentucky on Wednesday night at Turkey Hughes Field. The 13 runs scored in the inning were the most runs scored (in an inning) in program history.

Trey York had a record night as he tallied seven RBIs, which marked career high and was one shy of tying the ETSU single-game record ... The Buccaneer senior infielder went 3-for-6 and was a triple short of the cycle.

Every Buccaneer starter picked up at least one hit and touched home at least once.

Maher joined York with a home run – both being three-run shots in the fifth inning.

ETSU’s previous high for runs scored in an inning was 10, which was accomplished twice – March 20, 2008 vs. Jacksonville and April 8, 1993 against Bluefield … Overall, the Bucs plated the 13 runs on 11 hits and two errors in the frame, while 17 hitters stepped to the plate in the inning.

EKU starter Nick Cumpston suffered the loss (2-3) as he was charged with nine runs (seven earned) on eight hits in four innings.

After both teams were held scoreless in the first two innings, the Colonels pushed across three runs in the third to grab a 3-0 lead. Cole Warrenfeltz and Mandy Alvarez connected on two doubles to get the first run of the game, and Taylor Blair knocked a two run homer to give Cumpston a three-run cushion.

The three-run lead quickly vanished as ETSU plated two runs in the fourth and exploded for the record-setting 13-run fifth to grab momentum and a 15-3 lead.

With two outs in the fourth, the Blue and Gold cut into the lead and pulled within one. Kevin Phillips went opposite field and tallied a single to start the rally. From there, Blake Rowlett dropped a single of his own down the right field line to put runners at the corners, and Robby McCabe cleared the bases on his base knock to right center to pull within one run.

Following the two-run inning, Victor Gonzalez came on in relief and sat EKU down in order with only eight pitches.

The Bucs’ offense rewarded the junior right-hander as their bats caught fire resulting in the historic 13-run fifth inning. In total, ETSU hit 17 times in the frame, while all nine of the Buccaneer starters scored at least once, and York and Maher combined for four hits, four runs and eight RBI in the inning. Both sluggers connected on three-run homers, and York drove in two more runs with a double later in the inning. Robby McCabe drove in two runs with a single and scored once, while Owenby walked twice and scored both times. Jeremy Taylor registered two hits (bunt single and a double) and scored two runs, while Caleb Longley (Cleveland, Tenn.) and Kevin Phillips also drove in a run in the marathon inning.

EKU managed two score runs in the bottom of the fifth and tacked on a run in the seventh, but the Bucs answered with a two-run eighth to go ahead, 17-6. The Colonels got a solo home run from Shea Sullivan and an RBI single by Kyle Nowlin in the fifth, while Taylor Blair’s RBI single to left scored Sullivan in the seventh.

York capped off the scoring and his career night with a two-run scoring single in the eighth – and despite surrendering a two-run homer to Mandy Alvarez in the bottom of the ninth – senior Peyton Taylor (Kingsport, Tenn.) retired three of the next four hitters he faced to finish his SoCon-leading 16th game of the season.

ETSU continues its season-long nine-game road trip this weekend when the Bucs open a three-game SoCon series at UNCG on Friday night.