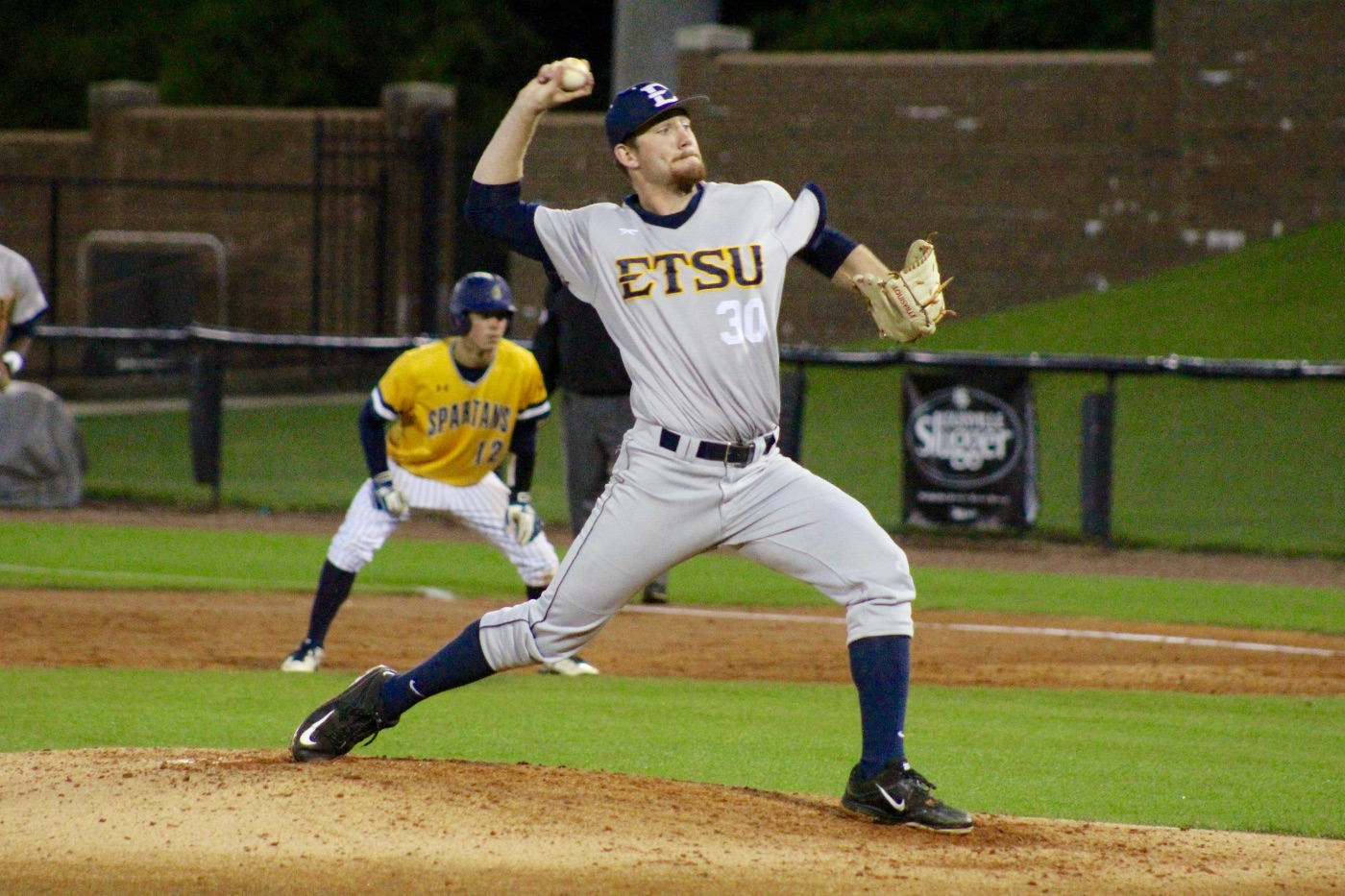 GREENSBORO, N.C. (April 22, 2016) – The ETSU baseball team went toe-to-toe with the nation’s top offensive team, but despite getting a tremendous effort from its bullpen, the Buccaneers couldn’t come up with the timely hit as league-leading UNCG rallied for a 6-5 win in the series opener on Friday night at UNCG Baseball Stadium.

The Bucs plated four runs in the third to go ahead 4-1 and gained a 5-4 lead on Blake Rowlett’s (Clarksville, Tenn.) RBI single in the sixth; however, Dillon Stewart’s two-out, two-run scoring double in the bottom half of the inning put UNCG ahead for good. ETSU had plenty of scoring chances late, but the Spartan bullpen held the Bucs scoreless for the final 3.1 innings to secure the comeback win.

"That was a great college baseball game tonight,” said head coach Tony Skole. “I hurt for our guys because they competed their tails off against a very good ball club, but we just couldn't get one more clutch hit to put us over the top. This stings, but we will get some rest tonight, come back tomorrow with great energy and try to even the series."

ETSU out-hit UNCG – who entered the night as the national leader in batting average, hits, doubles, on-base percentage, scoring, and slugging percentage – 12-9 … However, the Bucs went 3-for-15 with runners in scoring position and left nine runners stranded on the night.

Maher extended his hit streak to 11 straight games following a leadoff double in the sixth, while Mays pushed his on-base streak to 22 consecutive games.

Junior right-hander Victor Gonzalez (Mount Pleasant, S.C.) got the start and earned a no-decision after allowing three runs on three hits and walking four in 2.1 innings … Sophomore righty Ryan Simpler (Lewes, Del.) suffered the loss (0-4) as he issued three runs on six hits and struck out four in 4.2 innings … Simpler reached a pair of milestones in the setback as he registered his 100th career strikeout and notched his 100th career inning pitched on the night.

Josh Jacques (Rollinsford, N.H.) and Peyton Taylor (Kingsport, Tenn.) both gave the Bucs scoreless appearances out of the bullpen.

Ben Spitznagel, Ryne Sigmon and Jake Kusz led the Spartan offense with two-hit efforts and Andrew Wantz earned his team-leading sixth win of the season … Wantz tossed 2.1 innings of scoreless ball out of the bullpen and Chad Skyes walked and struck out one in the ninth to pick up his fourth save of the year.

After both teams were held scoreless in the first, UNCG plated the first run of the night on a two-out RBI single by catcher Jake Kusz, but Victor Gonzalez limited the damage as he left a Spartan stranded at third and the Bucs rewarded him with a four-run third to go ahead, 4-1.

Longley ignited the rally as he led off the inning with a single and advanced to second when shortstop Cesar Trejo airmailed his throw to first. From there, Lance Mays singled through the left side and Longley scored on an infield RBI single by Jeremy Taylor. Taylor hit a chopper up the middle and Trejo tried to touch second for the force out; however, he missed the bag and Mays was called safe. Mays later scored on an RBI single by Hagen Owenby – and after the Buccaneer base runners advanced on the throw to the plate – Taylor sprinted home on a wild pitch, while Owenby scored on a sacrifice fly RBI from Aaron Maher.

The Spartans answered by pushing across a pair of runs in the bottom half of the third and scratched across a run in the fourth to pull even at four. Gonzalez issued four walks in the third inning before Ryan Simpler came out of the pen to limit the damage. The Buccaneer right-hander entered to a bases loaded situation and allowed an RBI single to the first batter he faced, but Simpler got out of the jam by forcing a pop out to second and getting Kusz to strikeout looking. An inning later, the first two Spartan hitters reached on singles, while they moved up 90 feet on a sac-bunt from Andrew Moritz and Trejo later scored the tying run on an RBI ground out by Collin Woody. However with two outs and runners on second and third, Simpler got out of trouble for the second straight inning as he struck out Dillon Stewart swinging for his 100th career punch out.

ETSU regained a 5-4 lead in the top of the sixth as Maher legged out a leadoff double and later scored on Rowlett’s RBI single up the middle, but with two outs and the bases loaded, the Bucs were unable to do further damage. Jeremy Taylor hit into an inning-ending fielder’s choice to short to end the threat.

UNCG made the Bucs pay for not extending their lead in the top half of the sixth as the Spartans got a clutch two-out, two-run scoring double by Stewart to put the Spartans back ahead, 6-5.

The Bucs threatened in the eighth as Rowlett led off with a walk and moved to second on a single by Mays, but with two outs and two on, Taylor struck out on a check swing to end the inning.

Again, the Blue and Gold sent the go-ahead run to the plate in the ninth after Maher worked a four-pitch, two-out walk, but Sykes got Kevin Phillips (St. Louis, Mo.) out swinging to cap off UNCG’s 13th straight home win.

ETSU looks to even the series as game two is set for 2 p.m. on Saturday … Senior right-hander Lee Haeberle (Hendersonville, Tenn.) gets the start for the Bucs and UNCG counters with righty Keaton Haack … Haeberle is 3-0 with a 6.62 ERA and Haack is 2-1 with a 3.18.

Saturday’s game will be streamed live on the SoCon Digital Network, while live stats will be available via UNCGSpartans.com.