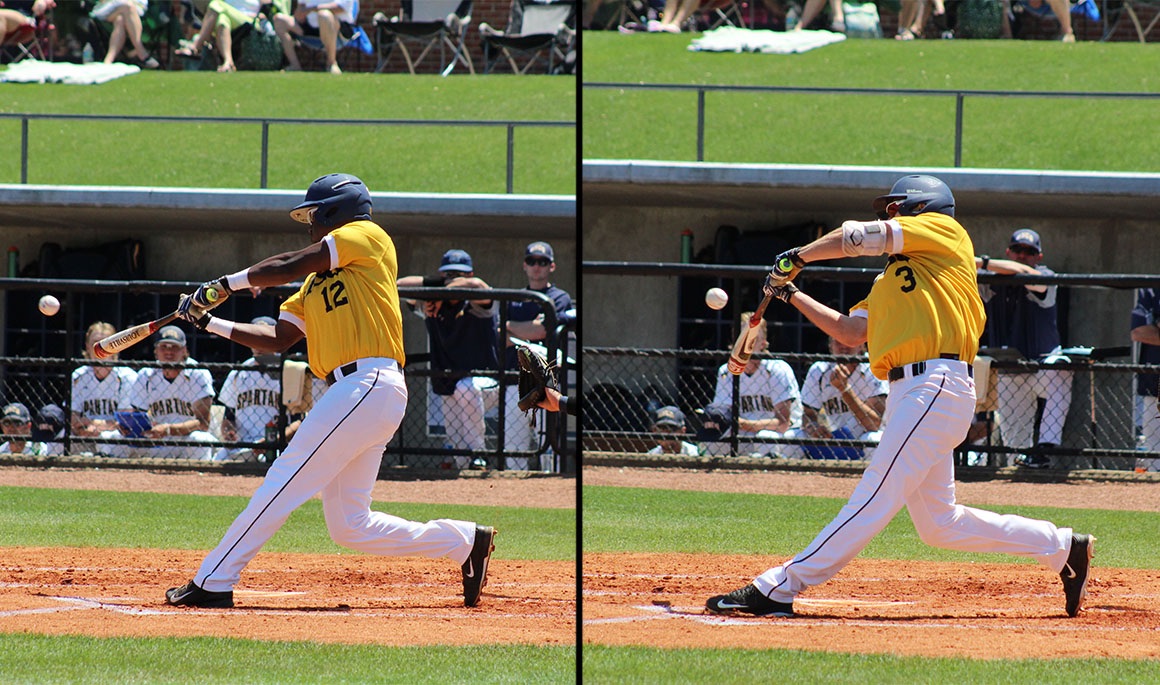 GREENSBORO, N.C. (April 24, 2016) – In back-to-back games with late rallies from the Bucs, the ETSU baseball team rallied late to tie the game, but UNCG regained the lead in the eighth inning to win the Sunday game 9-7 at UNCG Baseball Stadium.

Both Maher and Longley extend their hitting streaks as Maher’s moved to 13 straight and Longley’s streak went to nine games. Rowlett reached base safely off his single in the second to advance his on-base streak to 19 consecutive games.

The Blue and Gold sent four pitchers in the series finale to face conference–leading UNCG. Jamin McCann (Kingsport, Tenn.), who lasted the longest on the mound for the Bucs, was pinned with his third loss of the year (2-3), and Chad Sykes (3-2) earned his third win of the season.

Blake Smith (Ninety Six, S.C.) received the starting nod and went 3.1 innings while scattering seven hits and allowing five runs. He walked two and struck out two on Sunday afternoon. McCann came from the bullpen and pitched efficiently for four innings but allowed five hits and three runs in the outing. He struck out a team-high five Spartans, while walking one. Peyton Taylor (Kingsport, Tenn.) faced one batter and forced the batter to hit a soft grounder to second, and Josh Jacques (Rollinsford, N.H.) finished the game going 0.2 innings with one hit allowed and no runs allowed.

UNCG had three players that had three hits in the game, and the trio scored at least one RBI. Dillon Stewart and Ben Spitznegal combined for five RBIs, four hits and three doubles. All three pitchers the Spartans used had three strikeouts each.

After ETSU was held scoreless in the first inning, UNCG scored a run off a LJ Kalawaia double down the left field line to take the first lead, 1-0.

ETSU came back in the second as to match the Spartans in the top half of the frame. Blake Rowlett singled to center and advanced into scoring position off a balk by the UNCG starter, Matt Frisbee. After a hit by pitch, Kevin Phillips knocked a fly ball to move two runners into scoring position, and Caleb Longley scored Rowlett from third off a sacrifice fly to knot the game, 1-1.

The Spartans tallied five unanswered runs off ETSU starting pitcher Blake Smith. Three of the runs came in the second inning highlighted by a two RBI double by Dillon Stewart. UNCG plated a run in each the fourth and fifth innings by RBI singles from Ben Spitznagel and Devin Ruiz.

However, the Blue and Gold scored five unanswered runs of their own including a four run sixth inning. Hagen Owenby led off the frame with a single to left field, and Aaron Maher put runners at the corners as he connected with his first hit of the day. Blake Rowlett put the ball in play, and Spartan second baseman, Ben Spitznagel, mishandled the grounder that plated Owenby. After a sacrifice bunt from McCabe to put a pair of runners in scoring position, Kevin Phillips roped a double down the left field line to make the game 6-4. Left fielder Caleb Longley traded places with Phillips to cap off the four run fourth inning and pulled within a run.

In the eighth inning, Blake Rowlett notched a single through the left side for his second hit of the afternoon and advanced to second off McCabe’s second sacrifice bunt in the game. Kevin Phillips tied the game for the second time as he lined a double to left-center to score Rowlett from second to make the game 6-6.

Even with the momentum on the Bucs’ side, UNCG scored three runs in the eighth and pull ahead 9-7. With two runners in scoring position and one out, the Buccaneers infield was pulled in to keep the game knotted up. Even with a softly hit grounder to second, UNCG scored the go-ahead run to make it 7-6. The Spartans called for a safety squeeze bunt to score the second run of the inning, and Dillon Stewart doubled down the left field line to make the game 9-6.

The Bucs did not surrender as they started off the ninth with a walk from Trey York and infield hits from Hagen Owenby and Aaron Maher. Jammer Strickland (Knoxville, Tenn.) pinch hit in a one out, bases loaded situation and hit a deep sacrifice fly to left to pull within a pair, but that was all the Blue and Gold would score as Kevin Phillips struck out with the tying run at first base.

The Bucs will conclude their season-long nine game road trip by traveling to Radford on April 26 with first pitch coming at 6 p.m. inside Radford Baseball Stadium.