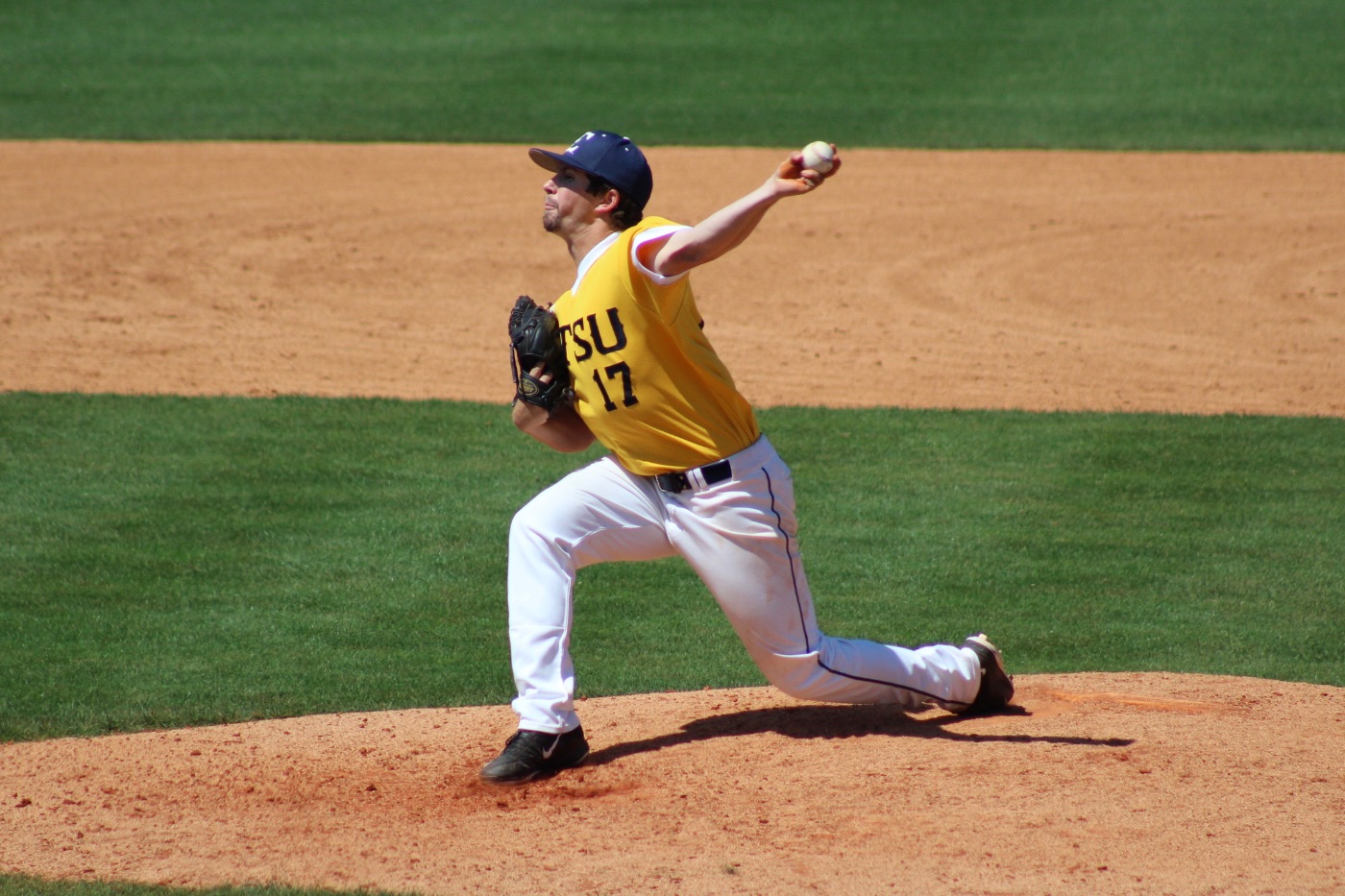 JOHNSON CITY, Tenn. (April 25, 2016) – The ETSU baseball team will conclude its longest road trip of the season as they finish the home-and-away series with Radford on Tuesday at 6 p.m at Radford Baseball Stadium. The Bucs took the first game of the series at Thomas Stadium as the Bucs recorded a walk off victory, 6-5.

ETSU won against Radford at home 6-5 after a crazy finish that resulted in Trey York (Knoxville, Tenn.) to score from first base with two outs. Radford had two throwing errors on the play that gave the Bucs the narrow win on March 29 in Johnson City.

Kevin Phillips (St. Louis, Mo.) went 2-for-2 with a solo home run and a single. He touched home twice and also drew a pair of walks, and Aaron Maher (Brentwood, Tenn.) finished 2-for-5 with a pair of singles and a RBI. Blake Rowlett (Clarksville, Tenn.) came up in a pinch-hit appearance late in the game and connected for a two RBI single to center to start the three-run eighth inning for the Bucs.

The Bucs sent out eight different pitchers for the Blue and Gold in the contest at Thomas Stadium. Victor Gonzalez (Mount Pleasant, S.C.) started and went two innings allowing two hits and one unearned run. Lee Haeberle (Hendersonville, Tenn.), Logan Gentry (Kingsport, Tenn.), Josh Jacques (Rollinsford, N.H.), and Peyton Taylor (Kingsport, Tenn.) each tossed one effective inning of relief each without allowing a run to score. Ryan Simpler (Lewes, Del.) lasted the longest out of the pen going 1.2 innings with one hit allowed and three strikeouts.

Danny Hrbek has been the most consistent offensive threat for Radford as he leads the team in many offensive categories. He totes a .327 batting average and has 50 hits with eight doubles. He is also one of the toughest to strikeout in the country as he is 30th in the nation as he strikes out once in every 15.3 at-bats. The last time he faced the Bucs, he went 0-for-4 with a walk and a strikeout.

Jonathan Gonzalez and Trevor Riggs are second and third on the team in batting average with .261 and .260, respectively, and Riggs leads the team in extra base hits with 14.

Radford will send out senior left-handed pitcher Tyler Swarmer to face the Bucs. The Blue and Gold have faced him already this season as he went 5.1 innings with seven hits, two runs, and four walks against ETSU. The Bucs offense scored four runs in the last two innings including a three run eighth.

The Highlanders have a team ERA of 4.92.

Peyton Taylor is set to toe the rubber for the Bucs in his first start of the year and his fourth start of his career. He has appeared in 23 games and owns a 3-4 record this season. He has struck out 13 and walked only three batters and leads the team in saves (3).

The Bucs will return home for the first time in 19 days and will square off against conference-foe VMI. The Keydets are 18-26 overall and 2-13 in the SoCon and are 0-7 in their last seven conference games.