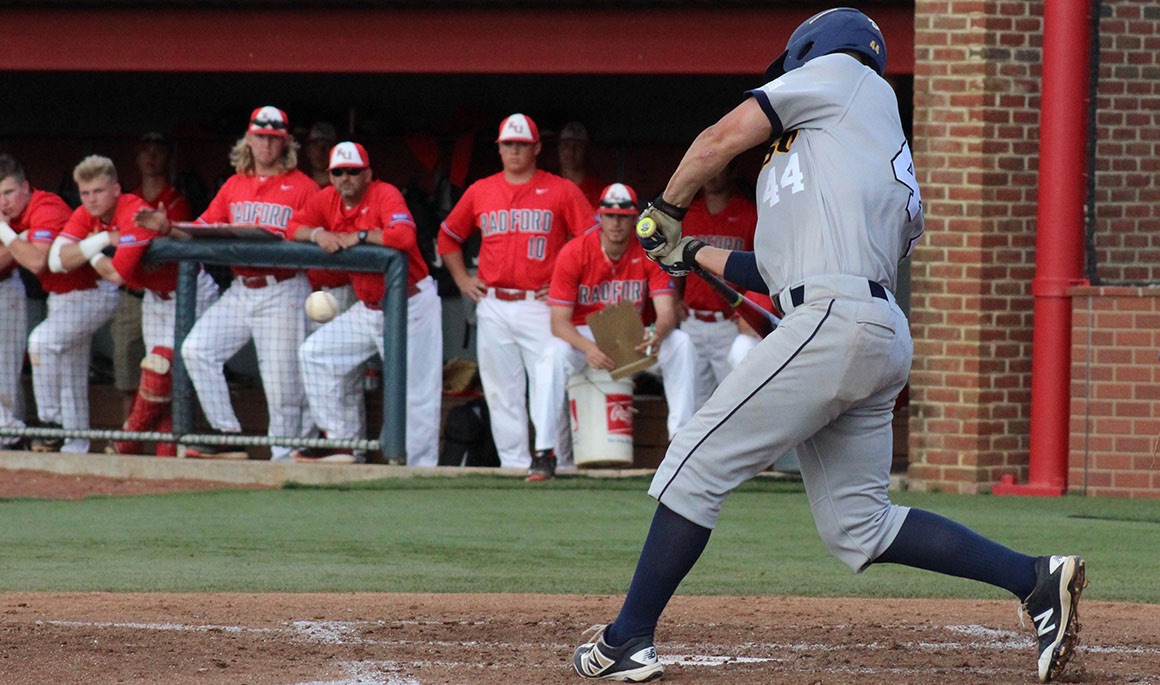 RADFORD, Va. (April 26, 2016) – In the final game of the nine-game road swing for ETSU baseball, the Bucs fall to Radford 6-5 as ETSU scored two runs in the ninth inning to pull within a run on Tuesday night at Radford Baseball Stadium.

Hagen Owenby (Knoxville, Tenn.) led the charge for the Blue and Gold as he tallied three hits on Tuesday. Trey York (Knoxville, Tenn.) came in the clutch as he tied the game with his two RBI double in the fifth inning. The Bucs got on the board first with a solo home run from Blake Rowlett (Clarksville, Tenn.), which was his fifth of the year. Kevin Phillips (St. Louis, Mo.) connected with a liner down the left field line that started the scoring in the ninth inning, and Christian Bailey (Kingsport, Tenn.) knocked two hits in his four at-bats.

Rowlett kept his on-base streak alive as he crushed a solo homer in the second inning, and Aaron Maher (Brentwood, Tenn.) has reached base safely in 14 straight games.

Peyton Taylor (Kingsport, Tenn.) started his first game of the season and his fourth of his career. He went three innings of scoreless ball. He scattered three hits without walking a batter and striking out a pair. Dillon Cate (Sevierville, Tenn.) came out of the pen to toss the sixth inning. He surrendered two walks and loaded the bases with one out, but the right-hander forced a strikeout and a ground out to end the threat. Victor Gonzalez (Mount Pleasant, S.C.) worked 1.1 innings allowing a run off two hits and striking out two, and Ryan Simpler (Lewes, Del.) finished the game by striking out two of the three batters faced.

Russell Koesters (Kingsport, Tenn.) was pinned with his first loss of the year as he allowed two runs on three hits. Starting pitcher, Tyler Swarmer, for Radford earned his third win of the season. The Bucs fall to 16-24 overall as the Highlanders move to 12-29.

Blake Rowlett started the scoring in the game in the second inning. With one out, Rowlett turned on an inside pitch and lofted a solo shot over the right-center field fence to give the Bucs a 1-0 advantage.

The Highlanders threatened in the bottom half of the inning as they had two runners in scoring position with one out, but starting pitcher, Peyton Taylor, forced an infield pop up and a strikeout to hold the narrow lead.

However, Radford took advantage in the fourth as they had the bases loaded with no outs. After a force out at home, Chris Coia singled to left to score two runners and get their first lead of the game. With runners at the corners and two outs, Shane Johnsonbaugh swiped second and the runner from third ran home to score and made the game 3-1.

The Bucs retaliated early in the fifth as Robby McCabe (New Port Richey, Fla.) and Jeremy Taylor (Fayetteville, Ga.) hit back-to-back singles to lead off the inning. Trey York split the left-center field gap and scored both runners and knotted the game at 3-3.

Radford fought back in the bottom of the frame with a solo homer from Trevor Riggs and a RBI triple from Colby Higgerson to retake the lead 5-3.

Hagen Owenby knocked his third hit of the night in the seventh to start a rally for the Bucs. Aaron Maher followed with a walk to put two runners on. After a pop out and a fly out, both runners advanced 90 feet on a wild pitch but were again left stranded after Caleb Longley popped up to the third baseman to end the inning.

Danny Hrbek added the pivotal run in the eighth inning as he split the right-center field gap and reached third to score Coia from first. After the RBI triple, the Highlanders led 6-3.

ETSU fought back in the ninth as Trey York led off the frame with a walk. After advancing to second on a catcher’s indifference, he moved to third on a fly out to deep center field. The Highlander third baseman gave the Bucs a gift as he dropped a routine fly ball to keep the inning alive and put runners at the corners with one out. Kevin Phillips took advantage as he roped a RBI single down the left field line to put runners at the corners. Down only two runs, Blake Rowlett reached on a fielder’s choice to second and plated Maher from third to make the game 6-5. Seth Cunningham (Bristol, Va.) pinch ran for Rowlett, and he swiped second early in the pinch-hit appearance for Andrew Lasure. With the tying run on second and two outs, Lasure went down swinging to give Radford the narrow 6-5 victory.

The Bucs return to Thomas Stadium for the first time in 19 days to face conference foe VMI starting on April 29 at 6 p.m. The second and third games of the series will be held on April 30 and May 1 in Johnson City.