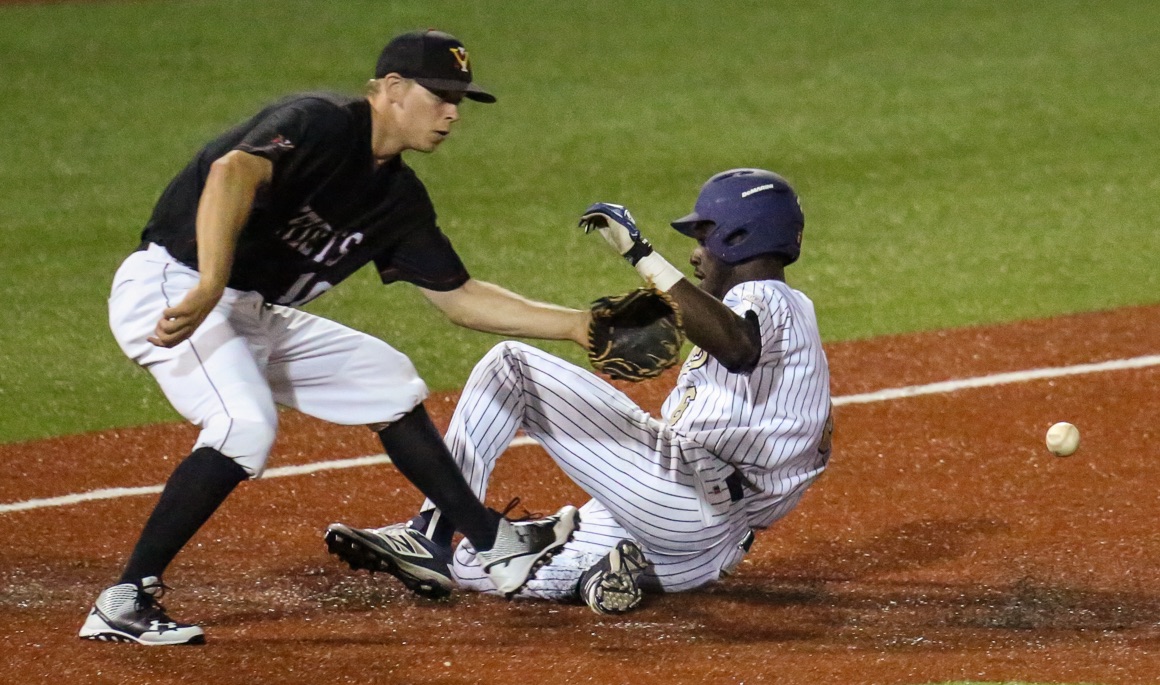 Due to weather, Saturday’s game time has been moved to a 12 p.m. first pitch.

Jeremy Taylor – who reached on a double and four infield hits – reach safely on all six plate appearances as he also walked in the fifth inning and also tied a school record with five runs scored ... Ironically, Taylor is the first Buccaneer to have a five-hit game since he accomplished the feat on March 13, 2013 (at UNC Asheville) … Taylor became the seventh ETSU player to score five runs in one game with the last being Matthew Scruggs (March 11, 2012 vs. La Salle).

As a team, ETSU set season highs in hits (21) and doubles (8), while it marked the most hits since March 17, 2015 when the Bucs recorded 23 in a win at Morehead State … The eight doubles were one shy of tying the school record.

York, Owenby, Aaron Maher (Brentwood, Tenn.), Lance Mays (Ridgely, Tenn.) and Christian Bailey (Kingsport, Tenn.) joined Taylor with multi-hit games … York went 3-for-6 with two doubles, two runs and three RBI, and Owenby also finished 3-for-6 with one double, a home run, one run and five RBI … Mays and Bailey both tied career highs with three hits, while Maher had two hits and drove in two runs … All three of Mays’ hits were doubles, which was one shy of tying the program record.

In total, Taylor, York and Owenby – ETSU’s 1-thru-3 hitters combined to go 11-for-17 with four doubles, one home run, eight runs scored and nine RBI.

Rowlett and Maher extended their on-base streaks in the win … Rowlett has reached safely in 21 straight games and Maher moved his streak to 15.

Junior Jamin McCann and sophomore Ryan Simpler combined for the five scoreless innings out of the bullpen … McCann earned the win (3-3) as he allowed two hits in three innings, and Simpler finished the game by pitching two scoreless innings of one-hit ball.

ETSU’s offense has registered double-digit hits in seven straight games and 14 of its last 15.

After trailing 5-2 heading into the bottom of the fourth inning, ETSU scored 13 unanswered runs to cap off the game (four run fourth and three runs in the fifth, seventh and eighth innings).

The Bucs plated the first run of the game, marking the 19th time ETSU has scored first this season.

VMI’s Matt Pita had three of the team’s eight hits as he went 3-for-4 with two runs scored, while Peyton Maddox homered and drove in three runs … Jack Gomersall suffered the loss (0-2) after he surrendered four runs on three hits in 1.2 innings.

The Bucs jumped out to an earlier 1-0 lead as Jeremy Taylor led off with a double and scored on Aaron Maher’s two-out single to the left; however, the lead quickly evaporated.

VMI scratched across a pair of runs in the top of the second to go ahead, 2-1. Collin Fleischer led off with a walk and moved to second on Matt Pita’s single, while both Keydets moved up a base on a wild pitch from Lee Haeberle (Hendersonville, Tenn.). Fleischer later scored on a double from Jacob Jaye, and Pita came home on a sacrifice fly from Peyton Maddox. The damage could’ve been much worse, but Taylor’s diving web gem catch in center robbed Maddox of extra bases and limited the deficit to 2-1.

ETSU quickly responded in the bottom half of the second when Blake Rowlett led off the inning with a solo shot to left en route to pulling even at two.

The see-saw affair continued as VMI went back ahead 3-2 in the third as Matt Dunlevy tripled to right-center and scored on David Geary’s RBI ground out to second.

The Keydets extended their lead to 5-2 on Peyton Maddox’s two-run home run in the fourth, but the Blue and Gold retaliated with a four-run fourth to regain a 6-5 advantage. Lance Mays started the hit parade with a leadoff double and scored on Taylor’s RBI infield single to short, while Trey York doubled home Christian Bailey after he reached on an infield single. Taylor later sprinted home on a wild pitch, and York scored the final run on Maher’s sac fly to left.

ETSU put up another crooked number an inning later as the Bucs pushed three runs – all with two outs – to make it a 9-5 advantage. Again, Mays ignited the surge with a double and hustled home on Bailey’s second double of the night. From there, Taylor walked to reach in his fourth straight at-bat, while York and Owenby followed with RBI singles to give the Bucs a four-run lead.

The offense continued flexing its muscle as ETSU combined for six runs on seven hits in the seventh and eighth innings to push their lead to, 15-5. In the seventh, Owenby connected on a two-run home run to left, while Taylor led off the inning with a bunt single and scored on York’s bloop double to right. Then in the eighth, Owenby drove in two runs with a double to left and Mays – doubled to leadoff the inning – scored on a wild pitch.

Game two of the series is set for noon on Saturday … A pair of right handers will toe the rubber as ETSU sends junior Victor Gonzalez (Mount Pleasant, S.C.) to the hill and VMI counters with freshman Josh Winder.