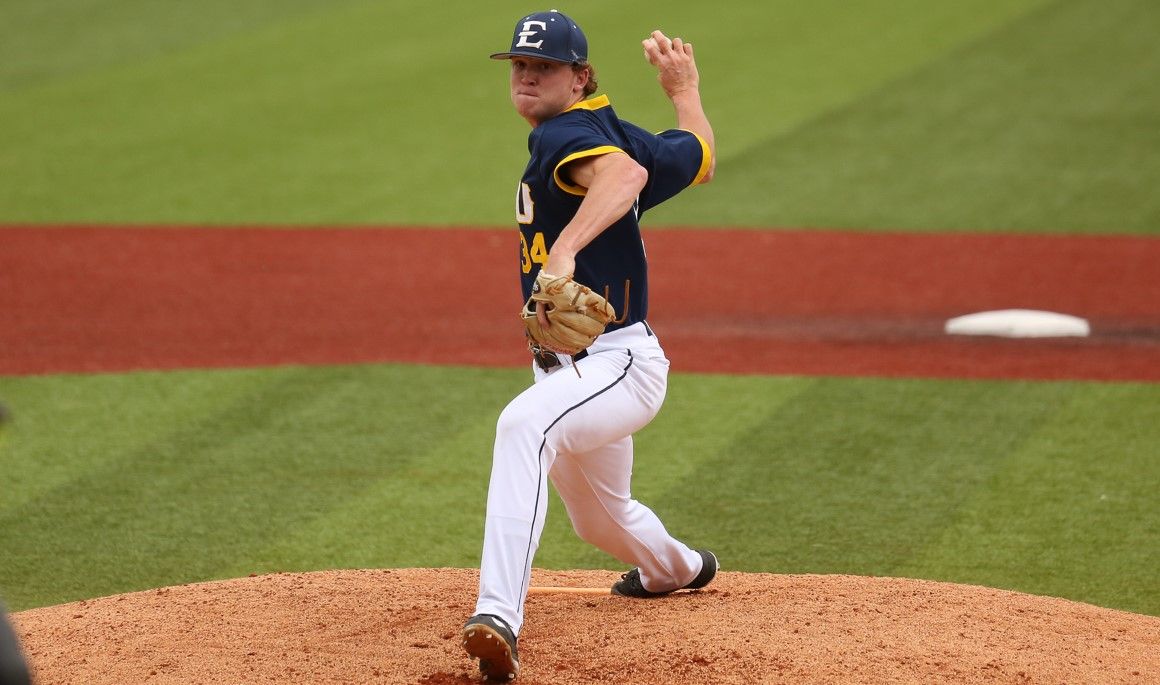 Blake Smith was nearly flawless in his 5.1 innings of relief against the Keydets. He entered the fourth inning and forced a groundout on the only batter he saw. He had two perfect innings and faced four batters in each the seventh, eighth, and ninth innings. He allowed one hit, which came in the eighth inning and did not allow a run while on the bump. He struck out five and did not surrender a walk.

Smith earned his team-leading fourth win on the year and moves to 4-4. Relief pitcher Blaine Lafin for VMI was pinned with his third loss of the season and goes to 1-3.

Victor Gonzalez (Mount Pleasant, S.C.) started his ninth game of the year and earned the no decision. He went 3.2 innings allowing six runs on five hits. He struck out five, which ties a career high for the junior college transfer.

Offensively, ETSU picked up right where it left off from yesterday. The Bucs pounded out 14 hits to continue their streak of double-digit hits to eight straight games and 15 of their last 16 games.

Hagen Owenby (Knoxville, Tenn.) changed the momentum of the game in the seventh inning with a solo home run off the scoreboard in left, which tied the game at six each. He finished the game with four hits and scoring once. The Bucs added three more runs in the seventh inning with a RBI single from Blake Rowlett (Clarksville, Tenn.) and a two RBI single from Lance Mays (Ridgely, Tenn.).

Rowlett led the Bucs with three RBIs and tallied a pair of hits and runs scored. He also extended his on-base streak to 22 games with a walk in the second inning. Lance Mays knocked two hits and scored two RBIs.

Aaron Maher (Brentwood, Tenn.) joined in with two hits including a double following Owenby’s home run in the seventh. He touched home twice and extended his on-base streak to 16 consecutive games.

Christian Bailey (Kingsport, Tenn.) was the last Buccaneer who had a multi-hit game as he connected with a pair of singles and a RBI in the second inning for the first run of the game for the Bucs.

VMI’s Will Malbon scored all the Keydet runs as he went 2-for-4 with four RBIs and a home run. Collin Fleischer led the team in his with three and scored twice. Only three VMI players tallied a hit against ETSU.

The Keydets scored the first runs of the game in the second inning as they connected with two runs in the frame. Will Malbon knocked a single to right field with two outs to score a pair with the bases loaded.

The Bucs cut the lead in half in the bottom of the second off two hits. Blake Rowlett walked with one out, and Lance Mays put runners at the corners with his single through the right side. Christian Bailey rocketed a ball up the middle to plate Rowlett from third and make the game 2-1, VMI.

After Victor Gonzalez worked a 1-2-3 inning, Trey York (Knoxville, Tenn.) and Hagen Owenby hit back-to-back singles to put runners at the corners with no outs for the Bucs. Starting Keydet pitcher, Josh Winder, surrendered a wild pitch to score York from third to tie the game at two. Aaron Maher followed with a single to left field to put runners at the corners for the second time in the inning. Kevin Phillips (St. Louis, Mo.) hit a soft grounder to short to give the Bucs the first lead of the game 3-2. Blake Rowlett knocked a single to center for the fourth hit of the inning to score Maher from second and advance the score to 4-2.

However, the ETSU lead quickly dissipated with a four-run fourth from VMI. The Keydets scored two on two wild pitches and a two run home run from Malbon to make the game 6-4.

ETSU pulled within one run in the fifth off a fielder’s choice. Hagen Owenby led the inning off with a rocket single to left field. After moving to second on a passed ball, Kevin Phillips singled to short to put runners at the corners for the Blue and Gold. Blake Rowlett hit a slow roller to second and reached on a fielder’s choice and scored Owenby from third.

After being held scoreless in the sixth, Hagen Owenby tied the game at six with a solo bomb off the scoreboard in left field. Aaron Maher roped a double to right-center and moved to third on his 13th stolen base of the season. With two outs, Blake Rowlett split the left-center field gap for a double and scored Maher to regain the lead, 7-6. ETSU extended its lead 9-6 as Lance Mays cracked a two RBI single to center for his second hit of the game.

Blake Smith held the VMI offense in check for the next two innings as he allowed just one hit in the seven batters he faced in the eighth and ninth to solidify the 9-6 win.

ETSU and VMI will return to Thomas Stadium on May 1 for the third game of the series. First pitch is scheduled for 1 p.m. The Bucs look to win the Sunday game over the Keydets and clinch their first weekend and conference series sweep of the season.