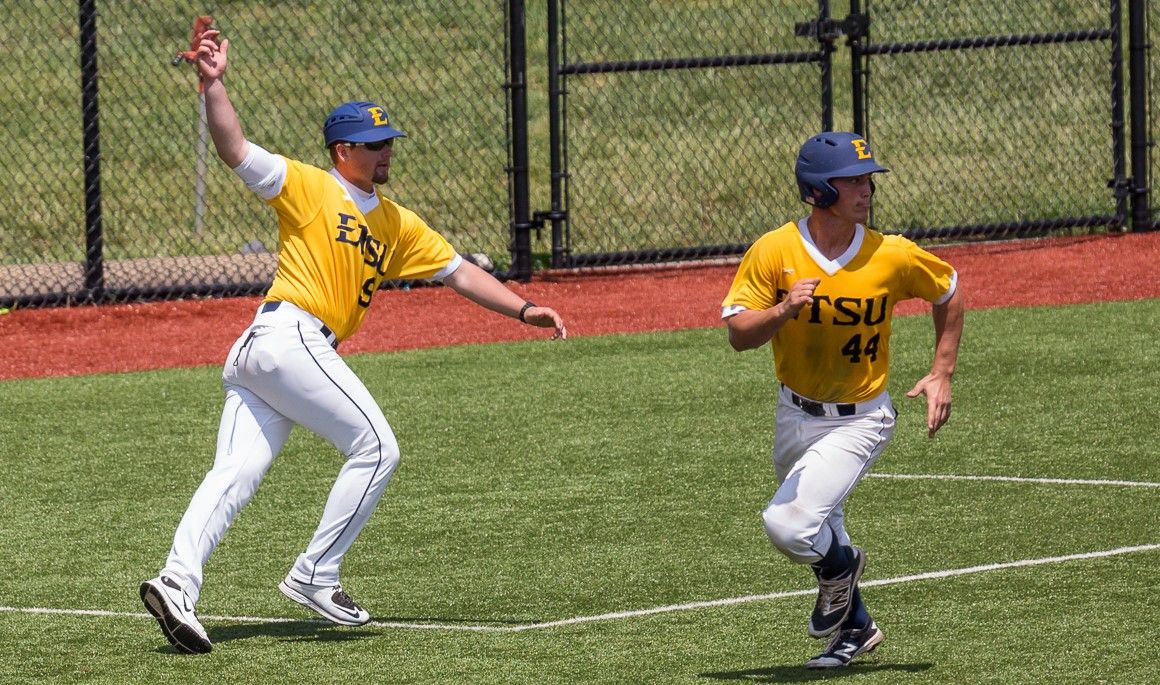 Bucs slug their way to series sweep over VMI
VMI at ETSU | May 01, 2016
Related Links

JOHNSON CITY, Tenn. (May 1, 2016) – A little bit of home cooking is what the ETSU baseball team needed to get back on track.

After dropping eight of nine on their season-long road swing, the Bucs returned home and released some fury on VMI as ETSU – who totaled 37 runs and 50 hits on the weekend – capped off the series sweep following a 13-7 victory over the Keydets on Sunday afternoon at Thomas Stadium.

The Bucs saw eight of their starters tally at least one hit on Sunday as Hagen Owenby (Knoxville, Tenn.) and Lance Mays (Ridgely, Tenn.) led the surge with three hits each. Owenby hit an opposite field home run to put ETSU on the board in bottom of the first. To go with his team-leading 12th homer of the season, Owenby also knocked in two RBIs and touched home three times. Mays collected a RBI and scored twice.

Kevin Phillips (St. Louis, Mo.) matched Owenby with three runs scored, while Christian Bailey (Kingsport, Tenn.) plated a pair of runs with a single in the third inning for his fourth RBI of the series.

Both Rowlett and Maher extended their on-base streaks today to 23 and 17 consecutive games, respectively. Blake Rowlett also extended his hit-streak to nine straight games following his two-RBI double in the third.

The Bucs scored 12 of the 13 runs in the first three innings, including an eight-run third. The Bucs tallied seven hits in the frame.

Jamin McCann (Kingsport, Tenn.) – who tossed three scoreless innings on Friday night – made his third start of the year and earned his second winning decision in the series. McCann, the winning pitcher in the series opener, tossed three strong innings of one-run ball before turning the ball over to Griffin Krieg (Nashville, Tenn.) in the fourth. Krieg pitched two scoreless innings and allowed one hit.

VMI had three players finish with multi-hit games. Jacob Jaye led the Keydets with three hits, while Fleischer posted a pair of hits and RBIs.

To go with the 37 runs and 50 hits, the Bucs also registered a .420 batting average, while 18 of the hits went for extra bases – 14 doubles and four home runs. The Blue and Gold posted an impressive slugging (.639) and on-base percentages (.467) in the three-game series.

Hagen Owenby led the offensive charge on the weekend as he went 10-for-15 with three homers and seven runs scored. The Buccaneer catcher slugged 1.333 and had an on-base percentage of .667.  Lance Mays also had a big series as he connected on eight hits with a team-leading four doubles. He scored five runs and collected three RBIs.

ETSU’s bullpen earned two of the three wins over the Keydets with Blake Smith (Ninety Six. S.C.) and Jamin McCann each earned a victory in relief. The pitchers this weekend struck out 24 combined batters and held opponents to a .248 batting average.

For the second straight game, VMI scored first on a wild pitch, in the top of the first inning, but Jamin McCann limited the damage to the lone run by inducing Peyton Maddox into an inning-ending pop out to leave a pair of runners stranded.

The Bucs quickly put a dent in the scoreboard as Owenby’s two-run blast snuck over the right field wall, putting ETSU ahead, 2-1.

From there, the fun continued for the Blue and Gold as ETSU pushed across two more runs in the second and plated eight in the third to extend its lead to, 12-1.

Kevin Phillips was hit by a pitch to leadoff the second inning and later scored on a wild pitch, while Lance Mays – who reached via a single – came around to score on Jeremy Taylor’s double to center.

After McCann worked a perfect third inning – courtesy of a 6-4-3 inning-ending double play – the Buccaneer offense rewarded the southpaw with the eight-run third. Blake Rowlett drove in the first two runs with on a double to right-center – and after Mays’ infield RBI single to first – Christian Bailey came through with his two-run scoring single to right. From there, Trey York (Knoxville, Tenn.) and Taylor drove in solo runs on sac flies, and Owenby – who reached on his second infield hit of the inning – scored the final run of the frame on a wild pitch.

VMI finally stopped the stretch of 12 unanswered runs in the sixth when Collin Fleischer led off the inning with a double down the left field line and scored on a sacrifice fly to make the game 12-2.

The Keydets eventually scored six of the final seven runs of the game as VMI scratched across a pair of runs in the seventh and eighth innings and tacked on one more in the ninth, but Ryan Simpler tossed the final inning and two-thirds to finish off the sweep.

ETSU capped off its scoring in the eighth when Robby McCabe (New Port Richey, Fla.) drove in Phillips on an RBI ground out to second.

ETSU wraps up its brief four-game homestand on Wednesday night when the Bucs look to sweep the season set with Winthrop … First pitch is set for 6 p.m. at Thomas Stadium.